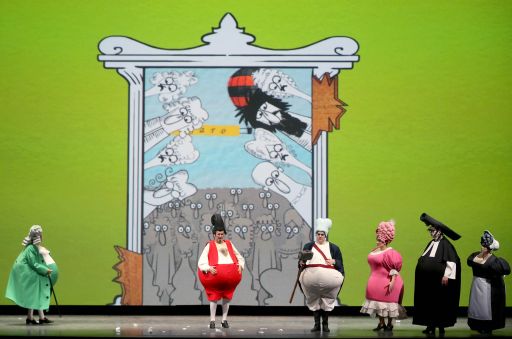 Undoubtedly the present production of The Barber of Seville, in the Arena di Verona’s winter season is designed to attract an audience unfamiliar with opera and its musical and cultural lexicon. The production team’s approach is to use a modern medium widely recognizable and easily decipherable across the widest possible range of age and culture; the cartoon. The backdrop, or rather fordrop, is a cinematic screen where syncronized, animated cartoons are used to illustrate and comment on the action, or make asides and references to cult characters, cartoon and non. The cast often relays with the characters by slipping through a split in the screen. The singers, coiffured with top-heavy wigs, are shaped and dressed grotesquely in a teletubby shape, an easy joke reflecting the general public’s prejudice about the size of opera singers. Given the intrusiveness of the animation, and the reduced mobility due to their costumes, the singers deliver what is practically a concert performance of the opera, a fact which does have technical advantages.
The animation, devised by noted cartoonist Joshua Held and the director Pier Francesco Maestrini, is cleverly conceived and skilfully executed. This version is a total reworking of an original staging requested by an itinerant Brazilian opera company, for a popular, agile and technically innovative production. The idea is cute. The highly cultured cartoonists of European origin in the Hollywood of the 40’s, often used opera and classical music in ingenious ways, including a Looney Tunes short film with Bug’s Bunny, The Rabbit of Seville. In this reverse process, irreverent portrayals and associations are rife, from Giovanni Allievi, Pavarotti, and Giuseppe Verdi to the Looney Tunes buzzards in a rather misogynous representation of Berta’s second act aria Il vecchiotto cerca moglie. The animation unleashes a surreal world of absurdities which correspond to the Rossinian spirit and prove especially effective in unscrambling the frantic ensemble scenes. They also provide the sense of mobility and rotation implicit in this vivacious and sparkling work, one of the greatest masterpieces of comic opera. The tone is joyous, playful and very entertaining.
Not all the ideas enhance the opera. The subplot of Rossini’s ubiquitous presence is cumbersome and the initial gag of the conductor running up to him to replace the missing orchestral parts, stops the flow and gives a didactic feel. They seem to belong to another script and are fun only for their own sake. The sound effects,–soldiers tramping, or the wham, whoosh, bang, typical of cartoons and computer games–are jarring, superimposed onto the already perfectly musically portrayed Rossini score. The animation steals the show and pushes the singers and orchestra into a subordinate position. It dwarfs and overwhelms them, depriving them of the possibility of delineating their own characters with their own sense of comic timing.The brilliant ouverture becomes the soundtrack for the opening screen credits, à la Pink Panther.
Stefano Montanari, held a firm and elastic grip on the performance both in his clear and zestful conducting and as harpsichordist in the recitatives and ironic asides, maintaining a perfect balance and synchronisation between stage and pit. Clean and transparent playing from the orchestra, quick on the uptake and attentive to detail, but kept decidedly on the soft side throughout, allowing little range for the piquancy of the orchestration and verve of Rossini’s famous crescendos. A suitably rowdy chorus of soldiers, was well-prepared by the chorusmaster Vito Lombardi. Annalisa Stroppa as Rosina, was precise and even in her delivery of virtuoso passages and melodic decoration. Unable to rely on coquetry in her characterization due to her bizarre costume, her Rosina resorted to straightforwardness both musically and dramatically. Edgardo Rocha was a nobile Almaviva, secure and rigorous in the agility passages, favoured by a bright timbre and a clear diction especially in the demanding, and often omitted final Cessa di più resistere. An excellent Don Bartolo in the convincing and resourceful characterization from Omar Montanari. Vocally strong and expressive whether blustering, pitter-pattering or singing in full voice, and his acting, despite the costume, was the most persuasive. Marco Vinco‘s Don Basilio showed some strain in the top register, and his acting was a little laboured but the natural burnished quality of his voice beguiled. Christian Senn vaunted the sense of ease and congeniality required of the role of Figaro. A personable presence and vocally sound and pleasing, the only inconsistency was a tendency to shout the top notes. Irene Favro as Berta and Salvatore Grigoli in the double role of Fiorello e the Officer completed the cast. The performance was received warmly and reportedly looks forward to a successful run. Photo Ennevi