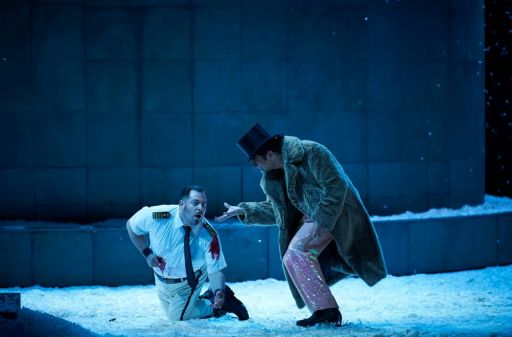 The Deutsche Oper Berlin is extending its French repertory by the last première of the 2014/15 season: Faust by Charles Gounod. Philipp Stölzl’s production develops the action as a kind of retrospective. Marguerite is sitting in a prison cell waiting for her execution that is carried out by lethal injection at the end. She is looking back at what has happened in her life. From meeting Faust for the first time and their short love affair to her longing for him to return and killing her child in despair. Especially the second part of the opera night concentrates on Marguerite’s fate the more so as the producer cancels the bacchanal. As consistent as his unorthodox approach may seem at first sight, it leaves next to nothing of the French spirit of Gounod’s score that focuses on the love story rather than the philosophical aspects of the play by Johann Wolfgang von Goethe. The stage by Philipp Stölzl and Heike Vollmer is dominated by a huge grey column in the middle that takes a lot of space. The scenes are arranged like an illustrated broadsheet all around it on the revolving stage. Little Marguerite (Helene Schwenk) is roller-skating and the ailing old Faust appears in a high-tech wheel-chair with breathing machine and electrocardiogram. Frozen pictures of young girls on bicycles underline Faust’s desire to be young again. After closing their deal Faust and Méphistophélès start their adventures in glittering suits á la Elvis Presley and the producer evokes the style of the 1950s for the fairground scene with neon signs, dodgems, petticoats, and cocktail dresses. An illuminated sign from above with the word “YE$” anticipates what Méphistophélès is going to sing about in the Song of the golden calf. Marguerite sells balloons and Siebel gingerbread in a bunny’s costume. Valentin gets his back tattooed to join the army as a soldier. Altogether it is a flood of colourful pictures framed by the chorus wearing chubby-cheeked waxwork masks and contrasted by the boring grey of the big column and the backdrop of the stage. So the underlying depressive mood never really disappears. Marguerite lives in a shabby caravan in a quickly set up forest and the Jewel song virtually turns into a Cinderella-like scene with a touch of Hollywood. Marthe Schwerdtlein in her light-green track suit appears like an illegal immigrant from Africa or the Caribbean who even satisfies Méphistophélès physically. Depression is all around in the second part in a flurry of snow which hardly stops. Yet Stölzl manages to create a few impressing scenes. When Siebel is the only one who still stands by the pregnant Marguerite, he kneels down in front of her and produces a wedding ring out of his vendor’s tray. Completely aghast at being rejected by her he is gazing after her leaving. Or when a wedding chapel in the form of a big cake is rolled in at the beginning of the fourth act and Marguerite gets married to her much-loved Faust after all, it becomes clear that it is her dream which is soon replaced by reality: socially treated with contempt and prosecuted for the murder of her child with Méphistophélès having a finger in the pie. In the final scene Faust and Méphistophélès can only manage to get into Marguerite’s maximum security prison by climbing over a wall that looks very much like the one that used to divide Berlin and Germany. They have to cut a metal fence and kill a prison officer. On the other hand I do not see at all why Marguerite’s dress by the otherwise professional costume designer Ursula Kudrna has turned out so disadvantageous that the singer looks like a combination of a waitress and a nurse that is completely unsexy at any rate, which is even more inexplicable as Stölzl suggests scenically that Faust’s erotic fantasies are about school girls in pleated skirts and white knee-high socks. Whatever a production may be like, it cannot kill Gounod’s catchy melodies that are the reason why the opera is so popular world-wide. The conductor Marco Armiliato knows about the French spirit of the score and makes the Orchester der Deutschen Oper play correctly but slowly at the beginning to find the right tempo soon. He creates a wonderful sound as a counterpart for the sometimes top-heavy production. The Chor der Deutschen Oper follows suit (chorus master Thomas Richter) and proves powerful and professional again. The young Romanian Teodor Ilincai is optically an ideal Faust singing every note impeccably but in an undifferentiated way. He belts top notes out instead of using the traditional falsetto. He is not a specialist in the French repertory at all even though his rather white tenor seems to be suitable for it. There is a lack of passion also owing to Ildebrando D’Arcangelo’s Méphistophélès who is not diabolic and seductive enough. He delivers notes in a sometimes roaring manner without articulation or finding it delightful to play with words. Altogether he remains too one-dimensional. Krassimira Stoyanova is an excellent Marguerite. Her warm and mature soprano with its effortless emission of higher notes sounds both convincing and touching. Once again Markus Brück proves to be one of the most important pillars of the company. His high and noble baritone is ideal for Marguerite’s brother Valentin whose aria “Avant de quitter ces lieux” undoubtedly turned into one of the climaxes of the performance. Stephanie Lauricella is an ambitious young Siebel and her clear and flexible mezzo sounds promising for bigger roles. The same applies to the glowing and velvet-like mezzo of Ronnita Miller who is simply smashing as Marthe. Photo Matthias Baus