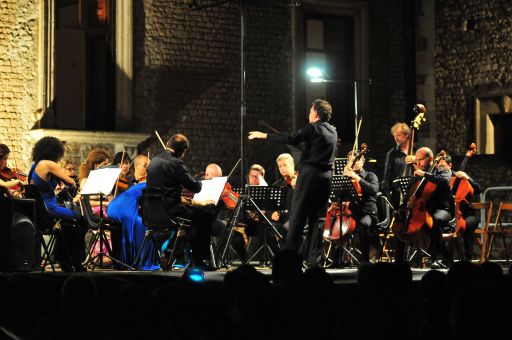 Caetani Castle Sermoneta(Latina). Pontino Music Festival 2015.
The Academy of Santa Cecilia Strings
Conductor Luigi Piovano
Antonin Dvořák: Serenade for Strings in E major, Op.22
Pyotr Ilyich Tchaikovsky: Serenade for Strings in C major, Op.48
Sermoneta. 4th July.
In 1963 Lelia Caetani, the last descendent of the noble Roman house of Caetani, and her husband Hubert Howard, created a chamber music festival, in the castle at Sermoneta, to honour the memory of Lelia’s musician father Roffredo. It was destined to become the Festival Pontino, and today, as such, is a vital musical and cultural force, in the province of Latina and beyond. It provides over twenty concerts in the month of July and in its 51 years of uninterrupted activity, can boast the presence of some of the world’s greatest performers. In 1977 under the guidance of Goffredo Petrassi, an annual international conference on Contemporary Music was also established and the International Campus of masterclasses held by prestigious teachers is held annually in conjunction with the festival. The venues, as often occurs in Italy especially over summer, are in extremely captivating locations. Besides the imposing courtyard of the castle at Sermoneta, reached by a steep climb up the cobbled streets of the stone hamlet, there’s the Gothic Cirstercian Abbey at Fossanova, the baronial palace at Fondi on the ancient via Appia, and the soothing, unruffled atmosphere of the Sabaudia town hall courtyard.
This year’s festival was inaugurated in the monumental Caetani Castle courtyard at Sermoneta on Saturday evening 4th July by the string orchestra, the Archi dell’Accademia di Santa Cecilia conducted by Luigi Piovano, in a popular and pleasurable programme of Dvořák, Serenade for strings in E major op. 22, and Tchaikovsky, Serenade for Strings in C major op. 48. In the way of introduction, the concert was preceded by a homage to the local humanist and ingenious typographer Aldo Manuzio on the 500th anniversary of his death in Venice. In his encomium, professor Giorgio Maulucci, conveyed the profound significance of the humanist, drawing parallels with the objectives and activity of the Festival Pontino and its illustrious guests over the years.
The concert proper opened with the gentle and propellant outpouring of the natural warmth and effusive melodic vein of Dvořák’s Serenade for Strings. Luigi Piovano, forsake his role as leader of the cello section in this occasion, to take on that of conductor. He guided the orchestra with intense participation and the orchestra responded promptly to his musical intentions, descending to almost inaudible pianissimi and highlighting both characteristic accents and hidden lines of counterpoint. The principal violinist and cellist gave a taste of solos to come with a rich and generous lyrical sound and elegant phrasing in their short solos in the first movement. Overall, however, the sound of the individual sections did not come across as compact or homogeneous, giving the impression of untidiness particularly in the violins and in the interwoven imitation passages in general. The intimistic moments too, for example in the opening of the fourth movement, resulted loose and dispersive. Although the very open and exposed courtyard can be held partly responsible, as the evening progressed the problem seemed to progressively improve, and the Tchaikovsky Serenade in the second half displayed a greater adhesion and cohesion of sound. The very nature of the Tchaikovsky work, with its full, majestic opening, the thrust of its passionately romantic style, the density of the writing, the expressiveness of its ineffabile and searing lyricism, overwhelming in the third movement, and the aura of its dramatic tension certainly contributed to a natural and spontaneous inclination towards a more uniform texture than did the transparency of Dvorak’ Bohemian crystal. The orchestra played with passion and precision. The pressing request for an encore was rewarded by a luscious arrangement of one of the most memorable and classic romantic themes;the well known theme from the Zeffirelli film of “Romeo and Juliet” by Nino Rota. The warmth and grace of the entwining solo voices of the principal violin and cello, movingly reflected the spirit of the two protagonists of the tragic tale, with the orchestra delicately providing the swell and tide of emotion. The evening ended quietly with a flowing rendition of Bach’s Air on the G string.
Jill Comerford