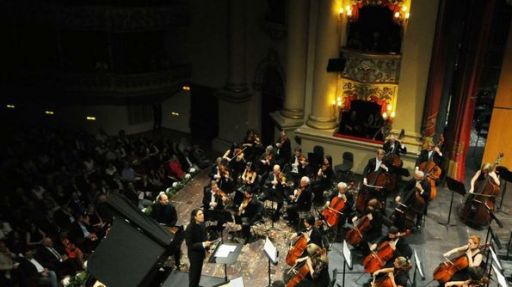 Verona. Teatro Filarmonico. Il Settembre dell’Accademia 2015. 24th Season
London Philharmonic Orchestra
Conductor  Vladimir Jurowski
Piano  Kirill Gerstein
Piotr Ilic  Čajkovskij: piano concerto n.1
Dimitri Šostakovič: 8th Symphony
Verona. 6th September, 2015.
An impressive and memorable inaugural concert by the LPO conducted by Vladimir Jurowoski with the pianist Kirill Gerstein as soloist, in  the  24th concert series ‘Settembre dell’Accademia’ in Verona’s Teatro Filarmonico. The programme was artfully balanced with the most famous piano concerto, Tchaikovsky’s piano concerto n.1 in the first part, and the mighty Shoshtakovitch 8th Symphony after the interval.  For the orchestra and conductor it was the week-end of the 8th; a resounding success in London at the Proms on Friday 4th September, in Verona on Sunday 6th and at La Scala on Monday 7th.  But there was no hint of a routine performance in Verona.  The orchestra played superbly.  Each section compact and resolute, and each soloist a glowing piece of marquetry in the overall architecture. The symphony gave ample scope to the single orchestral members to demonstrate their technical mastery and consummate musicianship; the haunting and mesmerizing cor anglais solo at the end of the first movement, riveting playing by the piccolo and principal flute particularly in the second movement, indistinguishable one from the other. Equally commendable the E-flat and principal clarinets.  The principal trumpet, not only played superbly, but had an edge to his sound in his solos which gave a truly Russian characterization to his performance.  All players  rate a mention for the quality of their performances; the viola section in the gritty opening of the third movement, the luminosity and nobility of every horn and brass entry, the strong presence but measured discipline of the entire line-up of the percussion section, the steady, unwavering foundation of the doublebasses, the flowing, poignant intensity of the cello solo in the last movement, to name the most prominent.
Vladimir Jurowski, demonstrated his complete mutual understanding with the orchestra, conducting  with the  restraint and composure  suitable to the gravitas of the symphony. He conducted only what was necessary, his gesture and movement never exaggerated.  No concession to rhetoric for the symphony that the Soviet authorities censored for its ‘unrelieved gloom’.  Yet the infinite combinations of his hand movements established a vital equilibrium and communicated all manner of  expression in this complex work.  So secure was his understanding with the players, that often, after the initial acknowledgement of an important entry, the instrumentalist needed no further direction. The sobriety of his gesture and the weight of his intentions, underlined the significance of the work. Written in 1943 as a poem of war, it is a  representation of pain, and an attempt to reflect on the terrible tragedy of war.  A particularly timely performance, in the week of the harrowing stories of the thousands of refugees from war-torn countries who are storming Europe.  The audience, mainly faithful subscribers, seemed rather stunned and overwhelmed by the work, so different from the usual choice of more popular and accessible symphonies in the festival’s programming. A pity that no programme notes were provided to guide the listener in an appreciation and  awareness of the musical and emotional content and the historical and social context, just as it would be unthinkable to approach a modern art exhibition without an introduction or explanation.
The first half of the concert, in contrast, was devoted to the most popular piano concertos of all time, Tchikovsky’s concerto n.1, but in its original edition.  Again, the audience was not given information on the implications of this choice.  Although not radically different from the usual version, the modifications do affect the overall interpretation of the piece. In the opening, the second and third beat chords are arpeggiated, giving the melody a  more flexible and differentiated metric impulse, and thereby altering the way the orchestra plays the theme. In fact, the orchestra can play the melody mezzo forte, as marked, the chords acting only as an accompaniment. A cut is opened in the last movement, restoring the original balance and structure, and the many differences in dynamics and articulation make for a more lyrical conception of the piece, replacing the superficial brilliance of the work with a more genuine musical character.  Kirill Gerstein embraced these aspects of the music. His approach was refreshingly more akin to chamber music than to the purely virtuoso.  There was a strong visual contact between soloist, conductor and orchestra, particularly evident as he passed the relay baton during the dove-tailing passages with the woodwinds.  Never understated or reticent, he asserted his dominance from the start, while conversing with  the other musical forces.  His was a sensitive and intelligent performance of intense committment and refinement.  He negotiated the technical challenges effortlessly, the double-octave passages executed with powerful composure at a breathtaking speed.  The melodic lines hung vibrantly in the air,  the bass-lines were highlighted, and the myriad of new colours and sonorities he brought to a much cliched work were all the more evident due to  the transperency of his touch.  Jurowski and the orchestra accompanied beautifully, with the same attention to the dynamic and  timbric nuances as the soloist. A Russian evening ended with the engaging encore, Etude for Left-Hand op. 36 by the quintessential Romantic  composer Felix Blumenfeld, also a renowned pianist and conductor and student of Rimsky-Korsakov.  Gerstein performed this captivating piece with great poise and power, astounding for the lustre, breadth and detail expressed with the left-hand alone. Photo Brenzoni