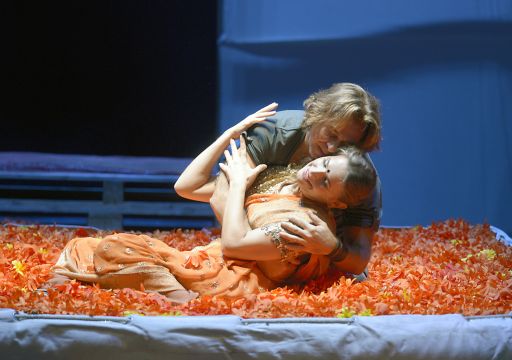 The Deutsche Oper Berlin continues its cycle of operas by Giacomo Meyerbeer who was of German origin and the master composer of the French Grand opéra. It started with a concert version of his “Dinorah” last season to go on now with his last opera “Vasco da Gama” traditionally known as “L’Africaine”. The thing is that Meyerbeer used to compose his operas with a lot of alternative musical pieces that he put together like a patchwork according to the staging requirements and for most theatrical effect. Even though he finished the composition of “Vasco da Gama” before his death, he did not leave a performing edition of the opera. The Belgian musical scientist and composer Fancois-Joseph Fétis looked after the first staging of the opera in 1865 by giving it a final version and the title L’Africaine. Once extremely popular, the Berlin-born composer’s stage works fell out of fashion by a combination of national aesthetics, anti-Semitism and financial considerations. An opera producer has both the chance and challenge to choose from Meyerbeer’s musical options and Vera Nemirova calls the Vasco score a quarry every director and conductor picks out of what he can use for his purposes. She emphasizes that it is a good thing to focus on a core to mark off the complex structure of a Meyerbeer opera. I appreciate her approach but it gets stuck somehow. The first part is like a concert in costumes (by Marie-Thérèse Jossen) as the singers seem to be arranged only, real relationships can hardly be found. After the first interval there is a lot of action going on on the discovery ship: a rape scene, forced baptizing, a pirate attack with a final massacre by machine guns with masked pirates being strongly associated with ISIS warriors. The scene resulted in the fiercest boos of the opening night. Kitsch finally dominates the last part set in a fantasy India with elephant heads and an omnipresent bed of bright orange flowers. The producer presents a lot of nice single ideas and moments associated with conquest, colonialism, exploitation and violence but a consistent line is missing that puts them together and presents this Grand opéra as a whole. I admit that is a real challenge for the complex mix of theatrical effects, cheap conventionalism and opera convention. Designer Jens Kilian uses a both universal and rather uniform stage with a round black board with a chalk outline of the world map pulled up for Inès’ opening scene and put down for a big round table for the council scene of the first act or the deck of the expedition ship of the third. Folded paper ships and half a dozen sails illustrate the famous seafarer’s story. The score is rich of musical colours for passion, love, intrigues, violence, orientalism. The long final scene with Sélica’s death by inhaling the vapours of a manchineel tree ends with an “aerial chorus”. The conductor Enrique Mazzola considers it typical of Meyerbeer’s ability to paint emotions in a completely French manner. His striving to create a balance that allows the music’s lightness and brilliance to emerge does not succeed in every respect. The Orchester der Deutschen Oper Berlin starts very slowly as if Meyerbeer was Wagner but that affects the composer’s intentions. Mazzola delves into details and manages tender single moments but every pause of the score turns into an unbridgeable gap. Star tenor Roberto Alagna and the French mezzosoprano Sophie Koch guarantee an absolutely idiomatic performance. The most famous musical piece of the opera is Vasco’s aria “O paradis sorti de l’onde”, orginally presented in this production as “O doux climat! splendide rivage” and Alagna presents it with stamina and professionalism despite his initially announced indisposition. He manages his part rather well but avoids too lyrical passages that would probably have failed. Sophie Koch performs musically and interpretationally in a masterful way. I got the feeling that there was really a human being on stage going through all the subtleties of love for Vasco whose live she saves several times without reaching his heart eventually. Markus Brück as Nelusco dominates the stage with his presence. Vocally excellent and never forcing his voice he also shows the ambivalence of the role. The Georgian soprano Nino Machaidze’s voice has a timbre I had to get used at the beginning, somehow thin, shrill and little charming but she sang with professional perfection. Albert Pesendorfer stood out of the rest of the cast as Grand Pretre. The Chor der Deutschen Oper Berlin (Chorus master William Spaulding) performed on the usual high level. Altogether this production contributes decisively to a revival of the composer’s work and I am looking forward to the next Meyerbeer projects of the Deutsche Oper to come: Le prophète and Les Huguenots. Photo Deutsche Oper Berlin © Bettina Stöss