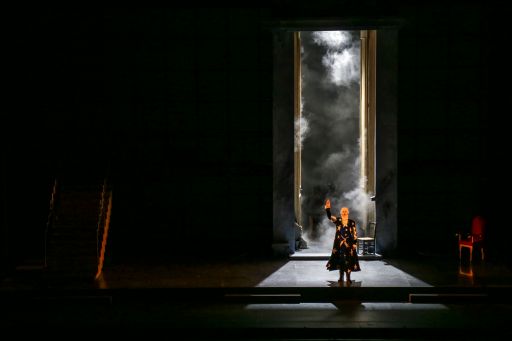 Foreign Readers by Jason T. McVicker19 Ottobre 201525 Novembre 2016
Chicago, Lyric Opera of Chicago, 2015-2016 Season
“LA CENERENTOLA” (Cinderella)
Melodramma giocoso in two acts in Italian. Libretto by Jacopo Ferretti, after Perrault
Music by Gioachino Rossini
Don Ramiro LAWRENCE BROWNLEE
Dandini VITO PRIANTE
Don Magnifico ALESSANDRO CORBELLI
Clorinda DIANA NEWMAN
Tisbe ANNIE ROSEN
Alidoro CHRISTIAN VAN HORN
Angelina, called Cenerentola ISABEL LEONARD
Orchestra and Chorus of Lyric Opera of Chicago
Conductor Sir Andrew Davis
Director Joan Font
Sets and Costumes Joan Guillen
Lighting Albert Faura
Chorus Master Michael Black
Co-production of Houston Grand Opera, Welsh National Opera,
Gran Theatre del Liceu and the Grand Theatre de Geneve
Chicago, 10 October 2015
Rossini’s La Cenerentola is currently playing in tandem at Lyric Opera of Chicago with Mozart’s Le nozze di Figaro, thereby amplifying the theme of forgiveness central to both works.  Rossini adored Mozart, who was a formative influence on the Italian composer’s studies.  Rossini carried forward into the 19th century Mozart’s novel innovations with the operatic ensemble, as well as the dynamic interplay of light and dark plot elements.   Andrew Porter once described La Cenerentola as “a romantic and lovely opera,” noting that Rossini rendered the opera “without the supernatural, a comedy of human character.”  The heroine is a figure of pathos, melancholy by nature and plaintive in expression.  Relegated to the role of common servant and subjected to perpetual abuse by her step family, Angelina responds to every hardship with unfailing virtue.  In her transcendent approach to adversity, the Prince (Don Ramiro) recognizes true nobility and the ideal spouse who will transform him into an appropriately magnanimous ruler.  Rossini’s limns the developmental progression of both characters in music of unsentimental tenderness, a journey notable for its psychological power and pathos.  In a serious production, the fulfillment of this journey can prove as cathartic as the better-known finale to Mozart’s opera.  With a protagonist of stature, Rossini’s opera is elevated from a pleasant coming of age story to an instructional allegory of universal appeal.  Alas, Lyric Opera of Chicago’s production disappointed with both its staging and leading lady, although redeemed to a certain extent by a strong supporting cast and conductor. Lyric Opera’s previous Angelinas include Teresa Berganza, Lucia Valentini-Terrani, Agnes Baltsa and Vesselina Kasarova.  The ideal heroine would combine a timbre of distinction with brilliant coloratura technique and eloquence of expression.  Isabel Leonard possessed none of these qualities and the performance suffered as a result.  A pretty, graceful presence, Leonard was vocally wan, ordinary in tone, more lyric soprano than mezzo-soprano, the lower register swallowed and weakly projected.  She was especially lacking in the bravura demands of the rondo finale, where her labored and frankly inept approach to the vocal fireworks was to simplify them to the point of irrelevance, with little of the emotional release others have uncorked here.  Her best moment came in “Ah! signor, s’è ver che in petto,” Angelina’s plea to Don Ramiro to pardon her family’s cruelty, where she suddenly found the vocal command and dramatic fluency missing elsewhere.  But as a totality, Leonard fell short.  It was not quite a case of Hamlet without the prince but inconsistent enough to leave a fairly large hole in the performance.   For most of the evening, Leonard seemed curiously disengaged from the dramatic situation, blithely unconcerned with what was transpiring around her.  She related mostly to an ensemble of actors costumed as mice, a sort of rodent Greek chorus that adds non-verbal emotional commentary to the proceedings as well as facilitating various scene changes.  The other characters appeared strangely unaware of the ‘corps de rongeurs’ and the reasons for all of this became horrifyingly clear in the performance’s conclusion.
Stage director Joan Font has decided that Cinderella is delusional and the entire story is a fiction of her

unhinged mind.  The final blackout found the heroine back at her hearth, still dressed in rags and wearing an apparently imaginary crown, surrounded only by her pack of loyal mice.  Goodness was not triumphant here but cynically dismissed as a laughable outcome the audience needlessly invested in all evening.  Angelina was reduced to a sort of menial Blanche du Bois, foolishly waiting for her Shep Huntleigh to emerge from the mists of fantasy.  This was a supreme example of distrust in the original material and a mocking slap in the face for anyone naïve enough to believe in the essence of what Rossini and his librettist were attempting to communicate.  The basic elements of the staging were promising.  Joan Guillen’s Day-Glo, Disneyesque designs struck notes of whimsy and fun, the unit set allowing for rapid changes of locale.  But like Lyric’s misguided FIGARO production, this production continually enveloped a resourceful cast in layers of cartoonish costumes, wigs courtesy of Gary Larson’s The Far Side and broadly indicated characterizations.  It is to their credit that many of the singers struggled free of this suffocating framework.
Lawrence Brownlee walked away with the evening’s honors, delivering lyrical elegance, ardent sensibility and cleanly bravura coloratura in equal measure.  His stratospheric high notes were easily produced and brought down the house in Don Ramiro’s scena “Si rotrovarla io guiro.”  Brownlee carried himself with dignity and noble bearing throughout, even when the staging did everything possible to make him look buffoonish.  Christian Van Horn’s Alidoro was not far behind, a literal and figurative tower of strength, his resonant bass-baritone heard to handsome effect in “La del ciel nel arcano profondo.” In the two buffo roles, Alessandro Corbelli and Vito Priante made positive contributions.  Corbelli’s tone was dry as dust but his patter was expert and his delivery of the text was a master class in style and interpretation.  Furthermore, Corbelli was unafraid to fully embody Don Magnifico’s darker side, unflinchingly sadistic and manipulative when necessary.  Priante’s Dandini was unnecessarily effeminate (what’s with this sudden resurgence in the lisping 1930’s Hollywood faggot stereotype currently in vogue at Lyric Opera?) but his vibrant, house-filling baritone proved ample compensation.  Both gentlemen sang heavily aspirated coloratura, a liability in this era of Rossinian proficiency but no worse than any of their illustrious predecessors.  As the two sisters, Diana Newman (Clorinda) and Annie Rosen (Tisbe) were a delightfully accomplished duo.  Both are first-year members of the Ryan Opera Center, the company’s young artist program, and each sang and acted with an assurance that belied their relative lack of experience.  Their decision to not overplay the absurdity of their respective characters was admirable and refreshing. On the podium, Music Director Sir Andrew Davis conducted a crisp, neat and bracing account of the score, unfussy in execution and well played by the Lyric Orchestra.  Davis supplied the feel of Mediterranean sunshine and warmth largely missing from the production.  The male contingent of the Lyric chorus brightened its scenes with wit and precision, singing with refulgent yet polished sound. In summary, Lyric Opera’s CINDERELLA can be somewhat recommended for its excellent supporting cast and conductor but is seriously compromised by a production concept at odds with the innate qualities of the opera itself and a heroine lacking too many of the indispensable qualities for success. Photo Andrew Cioffi & Todd Rosenberg