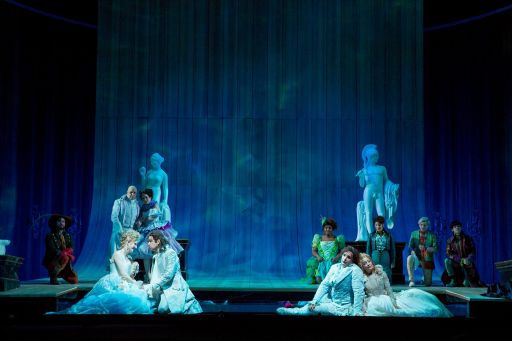 With Le nozze di Figaro, Mozart bequeathed to the ages an eternally miraculous, eternally restorative masterpiece that resonates with young and old. Based on Beaumarchais’ politically incendiary play of the same name, Mozart recast the work as a statement of broader humanitarian value. A story that began life as a cry for liberty has been transformed by Mozart’s music into something more timeless: the reconciliation of man with his fellow human beings. The Salieri character in Peter Shaffer’s play AMADEUS proclaims: “I heard the music of true forgiveness filling the theater, conferring on all who sat there, perfect absolution. God was singing through this little man to all the world.” In the words of Franz Schubert: “What a picture of a better world you have given us, Mozart!” Unfortunately, Lyric Opera of Chicago’s current production managed to obscure all of this in a production of staggering vulgarity and irrelevance.
Director Barbara Gaines, founder and artistic director of Chicago Shakespeare Theater, has served up a grotesque, amateurish staging, devoid of any coherent dramatic narrative or compelling conceptual rendering of the opera. The worst opera productions are those that ask the singers to check their personalities at the door and then strait jackets them in movements and designs that silence their interpretative input. Gaines was particularly culpable on this point, allowing garish costumes and props to serve in lieu of detailed portrayals, each one registering as a one-note, increasingly tedious punch line. Almost every realization of the characters lacked profile, dimension or any sense of internally derived, organically persuasive motivation. At times, Gaines’ choices seemed determinedly perverse in their attempt to override the character’s inherent qualities, no more so than when the Countess stuffed herself with sweets before singing “Porgi amor” or wiped a giant dollop of whipped cream on the Count’s chest at the conclusion to Act Three.
This willful wrongheadedness was especially apparent with the buffo supporting roles. Marcellina (Katherine Goeldner) was presented as a turkey in full autumnal plumage. Basilio (Keith Jameson) was a mincing, flamboyant queen sporting Austin Powers duds and every offensive stereotypical behavior associated with gay men. Bartolo (Brindley Sherratt) came through with slightly more integrity but not much. Seemingly foolproof characters were here a liability, mere ciphers in the dramatic landscape. The competency of the singers was never in question—only the judgment of a director who showed no faith in either her cast or the work itself.  Gaines was aided and abetted in her crimes by the designers. James Noone’s sets consist of blonde wood paneling and interiors suggestive of Liberace’s Las Vegas mansion. Susan Mickey’s costumes looked like the losing entry in a Project Runway team competition. The supertitles added to the mess with an English translation by Colin Ure that aimed for contemporary hipness but landed with embarrassing cuteness. If the overall intention was a form of outreach to the younger audience Lyric Opera so eagerly desires, this non-engaging, unfunny, cartoon-like production made for the worst possible introduction to the art form.
In this context, the singers stood no chance. Amanda Majeski’s Countess Almaviva proved the high point of the evening. She alone of the principals inhabited her role in such a way that its essence was illuminated, transcending the ludicrous stage business thrust upon her. Majeski exuded a radiant humanity that strongly recalled the late Elisabeth Soederstroem (and what a Jenufa or Katya Kabanova Majeski may prove to be!) Her account of the fiendishly difficult “Dove sono” was notable for poise and polish, luminously sung and launched with a grandly phrased, deeply felt recitative. In a still young career, Majeski has moved from strength to strength, justifying Lyric Opera’s confidence in its former Ryan Opera Center member (the company’s young artist program). In her American opera debut, Christiane Karg displayed a sweetly tender yet substantial soprano but the production reduced Susanna to little more than a vacuous blowup doll. Similarly, Luca Pisaroni’s Count Almaviva was allowed no element of sexual menace or despotic edge, hobbled as he was by a series of foppish getups and unkempt hair. Vocally, the Italian bass-baritone fared better but he was sorely tested by the tessitura of the Count’s aria, “Vedro, mentr’io sopiro,” the timbre turning coarse and gravely at both extremes of the range. Still, Pisaroni made a powerful moment of the Count’s final plea for forgiveness, notable for both poignant vulnerability and majestic stature. In the title role, Adam Plachetka was saddled with a characterization abundant in skulking poutiness but none of the wit, intelligence or courage that serve to propel the action forward. His bass-baritone lacked a firm tonal core, occasionally turning raspy or barked. Rachel Frenkel’s Cherubino was blandly sung and neither convincing or appealing as the pubescent pageboy. Henrik Nanasi’s conducting was disappointing, with flabby tempi, mushy orchestral textures, unbalanced ensemble and intermittently tentative coordination between pit and stage. He did, however, encourage liberal and quite interesting use of ornamentation by the singers. In summary, this was one of the most depressing productions in memory at Lyric Opera and an inauspicious beginning to the new season. Schubert may have been right about Mozart but even geniuses of this caliber are not indestructible. Gaines and her design team have achieved the seemingly impossible by turning an opera of endless delight into one of endless tedium. Photo Todd Rosenberg