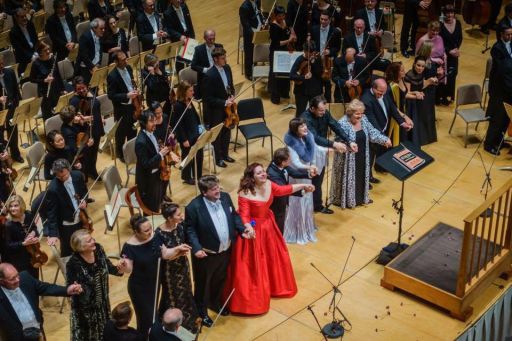 Foreign Readers by John Yohalem25 Ottobre 201525 Novembre 2016
New York, Carnegie Hall, Boston Symphony Orchestra
“ELEKTRA” Opera in one act, op. 58. Libretto by Hugo von Hofmannsthal
Music by Richard Strauss Klytämnestra JANE HENSCHEL Elektra CHRISTINE GOERKE Chrysothemis GUN-BRIT BARKMIN Aegisth GERHARD SIEGEL Orest JAMES RUTHERFORD Orest’s Guardian KEVIN LANGAN Young Servant MARK SCHOWALTER Old Servant KEVIN LANGAN Overseer NADINE SECUNDE First Maid NADEZHDA SERDYUK Second Maid CLAUDIA HUCKLE Third Maid MARY PHILLIPS Fourth Maid SANDRA LOPEZ Fifth Maid REBECCA NASH Klytämnestra’s Confidante ELIZABETH BYRNE Klytämnestra’s Trainbearer MEREDITH HANSEN
Boston Symphony Orchestra
Tanglewood Festival Chorus
Conductor Andris Nelsons
Chorus Master James Bagwell
New York, 21 October, 2015
Richard Strauss’s first fame came from his unprecedentedly elaborate symphonic tone poems, such as Till Eulenspiegel and Also Sprach Zarathustra. Continuing in this vein, his first operatic triumphs, Salome and Elektra, are, in effect, symphonic tone poems with major singing roles. Outside the opera house, they make superb showcases for top-notch orchestras eager to demonstrate technical mastery and to draw crowds with as many A-list singers as can be rounded up. Each is less than two hours long, but so vivid, so emotionally extreme that the talent to perform them adequately pretty much guarantees a resounding success. The Boston Symphony Orchestra, which, under the leadership of Andris Nelsons, brought Strauss’s Salome to New York’s Carnegie Hall last year in an exceptional performance featuring Gun-Brit Barkmin, returned with Elektra on October 21, after two performances of the opera at Boston’s Symphony Hall. The occasion was a triumph for the BSO, for Maestro Nelsons and for Christine Goerke, who had not previously sung the title role in New York. Goerke took a long time to reach her present eminence in the dramatic soprano fach. Around the century’s turn, I heard her sing Gluck’s Iphigénie en Tauride, Handel’s Alcina and Armida in Handel’s Rinaldo at the New York City Opera, and while the voice was never exactly light, it was flexible, wide-ranging and vivid in ornamentation. As an actress, especially the two Handelian comic sorceresses, she was comfortable and witty. Deeper notes were struck by her Donna Elvira in Marthe Keller’s production of Don Giovanni at the Met. She was biding her time. In the last year, Goerke’s Brünnhildes in many houses have thrilled Wagnerians, and I’ve heard her there as the Dyer’s Wife and Turandot. The voice is now enormous with a pleasing rapid vibrato, persuasively voluptuous in the lower reaches with a gleaming top reserved (in Elektra) for the daydreams of victory at the end of her first monologue and, later on, their culmination. In this highly acted performance (no director is listed), she made a point of working closely with her adversaries and allies, matching her scorn to the idealism of Gun-Brit Barkmin’s Chrysothemis. Barkmin’s silvery voice shines very well against Goerke’s darker sound, and her fur jacket and Louise Brooks hairstyle suited the frivolous nature of the character. Jane Henschel stunned us with sheer power years ago when she sang Klytämnestra with the New York Philharmonic under Loren Maazel. She no longer possesses that titanic force, but Klytämnestra doesn’t need it. Henschel makes up for it by acting the role more intensely, grating her despairs and crowing her victories. Among the serving maids, Nadezhda Serdyuk and Mary Phillips were striking. The men sounded impressive, but James Rutherford, a barrel-chested baritone who has sung Hans Sachs, lacked the air of menace, of cold murderousness that should radiate around Orest: It was merely amiable growling. Aegisth is usually a bit of a buffoon, which is how both Elektra and Strauss, in the orchestra, describe him, but Gerhard Siegel sang him as the proper king of Mycenae, a man feared by everyone but the crazed Elektra, with a wonderful warmth of tone that would serve any heroic lover in the Wagnerian repertory. Veterans Kevin Langan and Mark Schowalter performed the small roles to perfection. The BSO played with tremendous, driving pulse, each one wedded to the conductor’s vision. The ear-splitting brasses howled of vengeance and the strings were ripples of fire. It was a splendid, emotionally uplifting performance across the board.