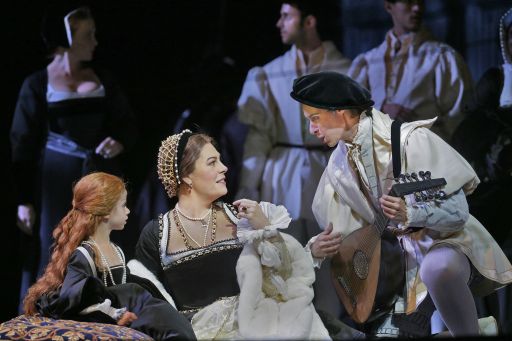 
Anna Bolena, premiered at Milan’s Teatro Carcano in 1830, was Donizetti’s breakthrough, a triumph for the composer and for Giuditta Pasta, one the great singing actresses of her day. The opera’s rediscovery in 1957, in turn, was both a triumph for Maria Callas and a proclamation of the worth of Donizetti’s long-neglected serious works.  But Anna can be a trap – lengthy, slow-moving and static compared to the swifter, more urgent Donizetti operas a few years later. The prima donna must hold our sympathy for three hours, twisting in the wind of King Henry’s malevolence and Anna’s indecision before she accepts her fate (with intervening scena di pazzia) and goes triumphantly to the executioner. The other characters are clichés: the bored, brutal king, Anna’s ineffectual lovers, the rival with a conscience. If Anna is not striking the others cannot carry it, but their parts are written for major voices and it is a dreary occasion lacking them.  Some publicist at the New York City Opera in the heyday of Beverly Sills (and the set designs of Ming Cho Lee) came up with the idea of Donizetti’s “Tudor Trilogy,” and the phrase has, unfortunately, stuck. (For one thing, it neglects his fourth “Tudor” opera, Elisabetta a castello di Kenilworth.) The Metropolitan, which had never given any of these works before, is now hopping on the extended caravan with three productions by Sir David McVicar. His Anna premiered in 2011 with Anna Netrebko and has been revived for Angela Meade. Maria Stuarda followed, and Roberto Devereux will arrive this spring. The three operas have in common a soprano in contention: soprano vs. bass (mezzo on the side) in Anna, soprano vs. mezzo (dueling prime donne!) in Maria, soprano vs. treacherous tenor in Devereux. The mood of all three operas is romantic melancholy with French horns. The prima donna flails against fate, then submits to it with cabaletta flaming. The three headsmen never sing; that would make an intriguing monodrama.  McVicar’s Anna contrasts lofty white brick with high dark paneling. There’s a four-poster bed or two, but the singers have to sing a lot while kneeling, and then attempt to rise gracefully. It is not a comfortable assignment. McVicar seems to be waiting as impatiently as the rest of us for the scene in the Tower, when he can use Tudor arches, the stage elevator and the fatal swordsman (a historical detail) featured just before the blood-red curtain descends. Costumes are black, white and gray, but Anna gets to wear crimson with fur sleeves in Act I, and in Act II, Giovanna Seymour adopts this royal purple.
Sondra Radvanovsky is a tall, slim woman with a huge, rather acid-washed voice. She specializes in Verdi: Luisa Miller, Stiffelio, Trovatore, Vespri, Ballo, Aida; too, at the Met, she has sung an interesting Norma. The lack of sweetness to her tone has been a hindrance to her success but her dramatic conviction tends to win people over—she is a healthy singer who holds nothing back. Her natural gifts do not include elegant fioritura, but she has worked on this aspect of bel canto and her Anna sings many elegant figures, triplets and turns if not quite trills, to underline the queen’s predicament. Her high notes are mighty, but racing to the footlights to hurl them at us like hard balls can set the teeth on edge—I was relieved when she ducked the final E-flat. Too, her power tends to shrivel to a thread when she concludes a phrase with an ornamental extension. It was rather an effective than a lovable performance, but how often do you hear an effective Anna? You can certainly hear this one, and the ovation in response was heartfelt.  Of her co-stars, the most eagerly anticipated was Jamie Barton, currently America’s sweetheart, winner of every award you’ve ever heard of, in the often lackluster part of Giovanna Seymour, Anna’s friend and (she learns too late) rival for the king’s affections. Barton easily matches Radvanovsky decibel for decibel, and their duets were outsize and thrilling conversations in music. Her vocal production has a Marilyn Horne quality, but the voice is more voluptuous than Horne’s was. Alas, she does not have Horne’s facility at coloratura – who does? There were some roughly executed runs and trills that the audience cheerfully forgave in return for many a creamy phrase that filled the house.  Riccardo Percy, one of the more ungrateful tenor roles in Donizetti (Leicester in Maria Stuarda runs neck and neck), was sung by Taylor Stayton, a last-minute replacement, who had made his Met debut in the part in 2011. Stayton proves a goodlooking and ardent lover, but his light voice turned shrill on top and vanished whenever Radvanovsky sang anything whatsoever.  King Henry was Ildar Abdrazakov, singing with his usual dark efficiency and suave style, working the arms-akimbo regality to the max. Tamara Mumford sang the treacherous Smeaton in a mezzo whose grateful evenness, plummy low notes and easy top seemed designed precisely for bel canto musico roles.   As Marco Armiliato led the Met Orchestra, the horns and flutes had an especially happy evening. The sameness of the doleful choral backgrounds and their repetitious motifs outstayed their welcome in an opera that takes its time reaching its dramatic points. The pace seemed rather steady and earnest than driven, but the audience for this long and unfamiliar opera was riveted and enthusiastic, as if bel canto was exactly what they wanted. Photo by Ken Howard/Metropolitan Opera.