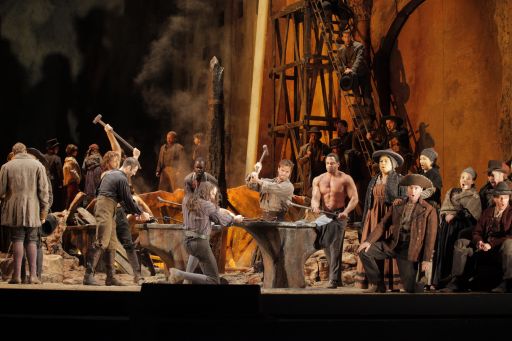 Pauline Kael, the late film critic of The New Yorker, famously described A Night at the Opera as “The Marx Brothers doing to Il Trovatore what should be done to Il Trovatore.” She was wrong about that.    What should be done to Il Trovatore is get five excellent singers whose voices can fill your theater. A first-rate chorus and a lively conductor are a great help, and a production that keeps the story tight, swiftly paced, the improbable plot points falling into place too precisely to be questioned. If the theater is the Metropolitan (3800 seats), that will be a remarkable occasion for anyone’s list, and the current run has been packing ‘em in. For the first three performances (including the HD broadcast), part of the draw was Dmitri Hvorostovsky between brain tumor treatments, received with the acclamation a house favorite in such straits deserves. But even without him and midweek, Trovatore drew a full house and a joyful one.  The David McVicar production is set during a civil war in nineteenth-century Spain. It’s not clear which civil war, there were half a dozen, take your pick, but the production curtain shows grim Goya faces and the costumes range over several eras. Anna Netrebko had a new Act I costume especially run up for her (because if you’re Anna Netrebko, they’ll do that); it is in the same raspberry hues that (with black and gray) dominate the production, but on her it looks like Tosca, a part she will surely undertake in a couple of years. (Goya equals Empire style, get it?). Netrebko’s voice has become heavier and darker with the years; only a phrase or two, uttered as she expired, recalled the silvery sound she possessed as Ludmila, Natasha and Manon. Verdi, however, suits the sound she has now, large and plush though a little unsteady when long phrases are to be held. The naïve but impassioned and sincere Leonora suits her outgoing personality far better than did the neurotic, internal Lady Macbeth. She sang almost tirelessly, repeating both her cabalettas, and leaping up a handy portcullis at the sound of Manrico’s last serenade. Her ornaments were sometimes uneven and she ducked the D-flat that should conclude Act I, but she filled the house with warm, glowing tone.   Yonghoon Lee, her Manrico, makes a handsome presence for Netrebko to hang on—he sang “Ah! si, ben mio” over her shoulder, the girl in his arms. His voice is sturdy and attractive, a baritonal tenor in the hue of Domingo and Bergonzi, lacking a brilliant top register—by which I refer to color; he has all the notes. He lowered “Di quella pira,” as Tucker used to do, to accommodate a B instead of a C, and he omitted the repeat. He does not cut a flamboyant, outgoing figure but he can whack swords with the best—and, in this staging, knock the Count down and slash his cheek at the end of Act II. A Verdi tenor of such gifts is always a good thing.   Dolora Zajick’s Azucena has been a fixture for decades, but her involvement remains total, her intensity and the size of her instrument undiminished, barring the C she omitted at the end of the Anvil scene. There was real beauty in her “Ai nostri monti” and a shiver down my spine at her final line. I know this opera very well, but Zajick always makes it new.
Vitaly Bilyy, who last sang the Count here five years ago, also with Armiliato on the podium, performed the assignment with dignity in a dark, smooth baritone of the proper proportions and liquid skill. He was gripped if not maddened by his passion, and he has mastered the flow of Verdian line: If the voice lacks the creamy resource of Hvorostovsky, he also sang without the desperate gasps for breath between lines that intrude on one’s pleasure in Hvorostovsky’s Verdi. Bilyy’s acting was convincing—not every baritone can lays hands unselfconsciously on the soprano during “Fra te che parli.”

Štefan Kocán sang Ferrando’s narration from mid-stage rather than (as the custom has now become) the very front of the stage apron. He would make an impressive Hunding but appears to lack the sinister depths that might turn him into a Grand Inquisitor. Maria Zifchak rather mumbled Ines’ moment of glory, the top note on “Tenta obliarlo,” but that suited a night of terrific competence and a frequent omission of high notes that might have been shrill. The chorus sang like dark chocolate cake; the soloists had a nice wall of sound upon which to relax while performing their athletic vocal endeavors.    Marco Armiliato conducted the familiar score briskly, but with a gracious link (was it eye to eye?) when singers wished to slow down, to pause, to rush on without applause between aria and cabaletta (Netrebko’s dramatic sense keeps her long scenes uninterrupted; she is willing to wait to be appreciated), to draw things out over a beautiful cantilena (in “Ah! si, ben mio”) because Lee was in the mood and the voice to do that and because, damn it, it is a beautiful cantilena and he sings it exquisitely.  The MacVicar turntable production, with its nest of anvils, its Golgotha in the shadows, its stucco’d Spanish arches up top, its endless staircase (down which Ferrando must puff his way just before singing his aria), is usefully battle-hardened, and the few intrusive touches—camp followers in 1920s black negligees during “Squilli, echeggi”; Manrico slashing the Count with a knife—do not complicate the swift pace of the show. It was a worthy, enjoyable performance, tightly wound but with space for principals with personality (especially the ladies) to show off. Photo by Marty Sohl/Metropolitan Opera.