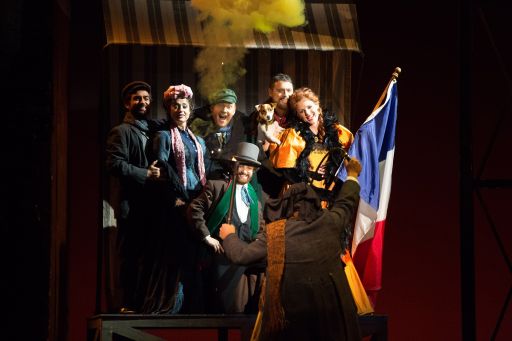 The Atlanta Opera, Georgia (USA)  – Season 2015-16
“LA BOHÈME”
Opera in four acts, libretto Giuseppe Giacosa & Luigi Illica
Music Giacomo Puccini
Mimì MARIA LUIGIA BORSI
Rodolfo GIANLUCA TERRANOVA
Musetta LEAH PARTRIDGE
Marcello TREVOR SCHEUERMANN
Colline NICHOLAS BROWNLEE
Schaunard THEO HOFFMAN
Benoît / Alcindoro ALAN HIGGS
Parpignol TIM MILLER
Orchestra & Chorus Atlanta Opera
Conductor Arthur Fagan
Chorus Master Walter Huff, Charles Baugh
Director Tomer Zvulun
Stage & video Eberhard Rom
Light Roberto Wierzel
Atlanta, 11th october 2015
In 1992 at the Cologne Opera a four year old girl in an orchestra seat was being disapprovingly eyed by a dour operagoer while watching a performance of Mozart’s Die Zauberflöte. When Papagena, disguised as an old crone announced her age as “18 years and 2 seconds!”  the girl laughed out loud, and the old operagoer looked at her. His eyes lit up and a broad smile broke across his severe face. A 200 year old joke had been made new through the eyes of a four year old who heard it for the first time.  And in Atlanta perhaps the best known and beloved of all operas became new for an entire audience. Perhaps not since Torino in 1896  has a public been so engaged in the dialogue and humor which Puccini so demandingly crafted with Giacosa and Ilica. Perhaps owing to this city’s young and openminded but inexperienced opera going public combined with an engaging and accurate staging and brilliantly adapted Supertitles (Stage Director Tomer Zvulun) which kept the audience involved in almost every plot twist, joke and lover’s quarrel onstage. Zvulun and set/projection designer Eberhard Rom set the piece later in the age of the Daguerreotype. Old photos like faded memories adorn the opening curtain, and a similarly themed set, effectively lit by  Robert Wierzel, brings us to these characters of an earlier but not distant time. The terraced floor remains constant throughout, and allowed for a quick three minute set change from Act I to Act II’s attractive Cafe Momus, which begins with the smokey flash of an old fashioned camera. When Act II ends with another photographic flash timed to the music, the curtain came down with what would have been that Daguerreotype, uniting story and memory. Combined with the well placed Supertitle screen this allowed an almost Wagnerian Gesamtkunst where music, drama and scenography are seamlessly united.  The performers onstage were engaging, completely and accurately involved in the story La Bohème tells. The voices were well matched and remained within the theatrical framework of the story of young bohemians with more ambition than talent, made immortal by love and tragedy.. By far the most experienced and polished, tenor Gianluca Terranova presented an attractive and believable Rodolfo. In addition to a long full high C in his famous aria his interesting use of the language made his performance a pleasure to hear. On his way to a upcoming production of Don Carlo (Deutsch Oper am Rhein) he may be a tenor emerging from the youthful days of Roberto Devereux, Rigoletto and Lucia di Lammermoor, into an age of more full throated vocal production. Indeed his most effective singing came at the demanding entrance in the Third Act, as well as the First Act aria’s “Talor dal mio forziere..” to the high C, where he showed no signs of the brighter narrower sound which he used in other parts of the role. Maria Luigia Borsi as Mimì may have the fullest voice of the cast, but register problems in the middle/low voice prevented a legato and she lacked bloom (sventaglio) in her high phrases. As strong as many of her high notes were, the voice sounded as if it might not be entirely healthy. Leah Patridge’s Musetta gleamed on top and she produced an excellent diminuendo at the end of her Act II aria. Trevor Scheuermann portrayed Marcello strongly and has a fine stage presence. His solid attractive baritone sailed through the role, and perhaps one can only criticize him for holding the high F at the beginning of the opera (..affogo un Faraon) so long, a choice which was more silly than tasteless. His Italian, as well as that of the rest of the cast was excellent even in extended exchanges with his Italian colleagues. Schaunard, Colline and Benoit/Alcindoro were cast with young singers. Nicholas Brownlee had no problem with Colline’s aria, but the undeveloped nature of this excellent instrument combined with his lack of Italianate line made this Bass ‘star turn’ unremarkable. Theo Hoffman, who is still studying for his Master’s Degree at the Juilliard School, is a gifted ‘stage animal’ but was barely audible as Schaunard. Alan Higgs was accurate as Benoit and Alcindor, but brought neither the vocal nor physical humor which makes them the operatic gems they can be. Tim Miller sang a strong, accurate Parpignol, no mean feat when running at full speed. The Chorus made Walter Huff’s debut as chorus master an auspicious one, with clean balanced singing and good diction, as did the Children’s Chorus under Charles Baugh.  The Atlanta Opera Orchestra played a sometimes muddy and recalcitrant Bohème under the baton of the company’s Music Director Arthur Fagan. Stage-pit coordination problems quickly settled down after a shaky start, but he and the tenor could not always agree, and slow tempi robbed Puccini’s breathtaking moments of their heart and expansive glory.  A difficult task with limited rehearsal and players who don’t know the opera.  However any faults only serve to reveal why Puccini’s masterwork was such a success in Atlanta and will last as long as Mozart’s: so much can go wrong but what goes right goes to the heart.