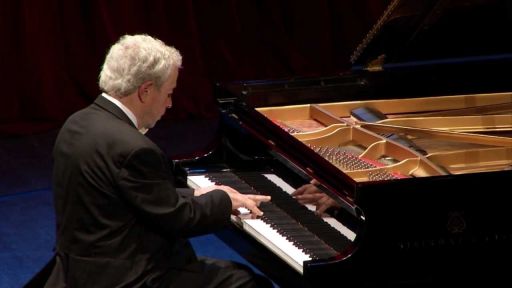 Unanimously recognized as one of the elite performers of our era, Nelson Freire regaled the capacity audience at Verona’s Teatro Ristori with his supreme artistry, in the Amici della Musica di Verona’s 2015-2016 inaugural concert of its 106 th concert season.   The Brazilian pianist, despite his reserved nature and tendency to avoid publicity, is considered one of the most interesting and fascinating artists on the international scene and his appearances are rare in Italy. He presented an extensive programme including Bach’s Partita n. 4 in D Major, Beethoven’s Sonata op.110, eight Vision Fugitives by Prokofiev and Chopin’s Sonata in E minor.  His ability to evoke different and distinct textural and musical realms between the different works on the programme, was astonishing. His figure, composed, still and anchored, left the beauty, power and vitality of his playing to flow through the mesmerizing suppleness of his hands. He caressed the keyboard, conjuring up an infinite range of nuances to convey his vision. His technical and musical devices, superlative phrasing, brilliant and sparkling articulation, flawless memory and categorical control were a delight to experience, but above all, they were the precious elements that this supreme musician forged to create striking and unforgettable interpretations.
His Bach was unashamedly full-bodied and pianistic without being bombastic. He displayed his superb ability to unexpectedly change the weight and texture of his touch like a light brushstroke.   A direct approach, where the the sharpness of the ornamentation and the brilliance of the cascading runs complimented the smooth roundness and resonance of the meandering lyric lines, brought Freire’s own unfailing skill and imagination and rich variety of styles and moods to those of Bach. The highlight of the programme, was Beethoven’s piano sonata n.3 op. 110, the middle one of the last three written for the piano. Characterized by the same intellectual clarity and profound expressiveness that marked the entire concert, his intense but unadorned playing allowed the spiritual and existentialist nature of the work to shine through. The lovingly simple opening melody, the gentle counterpoint of the development and the poetic coda of the first movement followed by the brief and dramatic scherzo prepared the way for the heart of the sonata, the finale, where he coaxed out the vocality of the declamatory recitative, the pathos of the tearful song of the klagender gesang and the transcendental luminosity of the final fugue. He slipped between the poignant and operatic and the light and ecstatic with consummate ease, weaving the fugue’s inversions and the thematic augmentations masterfully. The brief eight movements he chose from the twenty of Prokofiev’s Visions Fugitives, were predominantly those of an elegant, light and playful nature in which he created an intimate and refined atmosphere. In his performance of the last work on the programme, Chopin’s Sonata n.3 in B minor, there was no sign that the writing was in any way as taxing as it is. Crystalline transparency, clarity of structure, sense of direction and a total avoidance of emotive indulgences were the hallmark of an execution of unforced lyricism, fluidity of line, where a panoply of subtle dynamics, colour and articulation were exhibited, not for their own sake but in order to put the expressive content in relief. The delicacy of the fluid Italianate melodies, the dazzling and virtuosistic lightness of the scherzo, and the stillness of the central meditative recitative, the refinement of Largo and the vigour of the bubbling rondò Finale demonstrated the extraordinary depth and breadth of Freire’s art. A resounding success met with thunderous applause to which he generously conceded three encores.