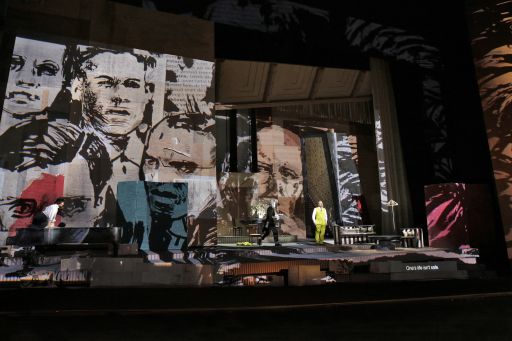 New York, Metropolitan Opera, Season 2015/2016
“LULU”
Opera in three acts. Libretto by the composer.
Music by Alban Berg
Lulu MARLIS PETERSEN
Dr. Schön JOHAN REUTER
Jack the Ripper JOHAN REUTER
Countess Geschwitz SUSAN GRAHAM
Alwa DANIEL BRENNA
Schigolch FRANZ GRUNDHEBER
Animal Tamer / Acrobat MARTIN WINKLER
Painter / African Prince PAUL GROVES
Physician / Professor / Policeman JAMES COURTNEY
Prince / Manservant / Marquis ALAN OKE
Dresser / Schoolboy / Page ELIZABETH DESHONG
Theater Manager / Banker JULIAN CLOSE
Journalist TYLER DUNCAN
Designer KATHRYN SAY
Girl ASHLEY EMERSON
Mother JANE SHAULIS
Solo Performer JOANNA DUDLEY
Solo Performer ANDREA FABI
Conductor Lothar Koenigs
Production William Kentridge
Production Designer Catherine Meyburgh
Set Designer Sabine Theunissen
Lighting Designer Urs Schönebaum
New Production Premiere
New York, 5 November, 2015
Both the singing and the orchestral playing in the Met’s new production of Lulu, which premiered 5 November, are of such quality, such luster, that they will delight admirers of this difficult masterpiece and have added a triumphant critical feather to the company’s cap. But William Kentridge’s visual inventions in this, the company’s second, production of Berg’s outrageous opera, are so busy calling attention to themselves, so insistent that Kentridge’s genius be the focus of the event, that the opera is somewhat obscured. The evening, therefore, did not entirely satisfy. I wish Kentridge, or somebody, had paid half the attention to the dramaturgy, to suiting the actions of the cast to the words they were singing, that was paid to the busy animated scenery and the distracting choreography.  During the first two acts, the enormous Met stage is divided roughly in half, the singers performing in one section while the other was occupied by a grand piano and a dancer, miming … well, I’m not sure what she was miming. Playing the piano in Act I, lolling within it for Act III as if on a drugged bender, exchanging kisses with the title character now and then. The backdrop was a screen for projections, as in Kentridge’s sets for Shostakovich’s The Nose. In Lulu, they are mostly an artist’s sketchbook, notes and caricatures on newsprint, Lulu as a fiendish nude rolling animated eyes, hips and sex, interspersed with headlines. The style of the art and the décor recalled the madcap era after the First World War and ended, appropriately, with a sinking ship in Act III, symbolizing an economic catastrophe. This was a great deal of busy business for the singers to contend with for audience attention. Some of the hyperactivity may have been cued by Berg’s own wish that the great interlude between scenes in Act II be accompanied by a film showing Lulu’s offstage jail break, but less distraction and more attention to suiting the singers’ behavior to the words they were singing would have made this a more effective show. Marlis Petersen, who triumphed in the last Met presentation of Lulu in 2010, still has the D’s and E’s for the role’s fluttering coloratura but the personality of the sociopathic temptress escaped her. She seemed more dazed than flirtatious. Nothing in her affect explained the attitude of the self-destructive men in her life; it was simply a “given,” recalling those Mae West films of the period: the attraction is in the script, not in anything one sees or hears. Petersen has become, however, newly affecting in the third act scenes, where Lulu begins to know herself, to be terrified or depressed by circumstances that once amused her. Vocally, she gives these scenes a greater depth to express her hopelessness. Johan Reuter made a vigorous Dr. Schön, suppressed venom in his unwilling servitude, a distinguished, autocratic figure. Daniel Brenna’s Alwa seemed to be attempting to befriend Lulu, as a foster sister rather than succumbing to her sexuality. Paul Groves was strained by some of the higher notes of the Painter’s range.  Martin Winkler made a more striking impression as the Acrobat (and the Animal Tamer) than one usually sees, a bravura vocal and acted performance, strutting about as if the show belonged to him, his baritone outbursts insinuating or explosive. Franz Grundhaber made an almost endearing Schigolch. Alan Oke gave typically fine performances as the conceited Prince in Lulu’s dressing room and the slimy Marquis who hopes to place her in a Cairo brothel.  Susan Graham sang the Countess Geschwitz with fervent yearning, drawing pity for a figure who too often comes off as a caricature. Elizabeth DeShong, whose strong and beautiful mezzo always sounds radiant at the Met, where she gets far too little to do, was charming as the poetic schoolboy and a casino page who changes dresses with Lulu. The Met orchestra is familiar with this score and, presumably, trained in it with James Levine before he withdrew from the production. His replacement, Lothar Koenigs, underscored the lyrical passages and led the more Sprechstimme ones with terrific energy and precision.  Photo Ken Howard