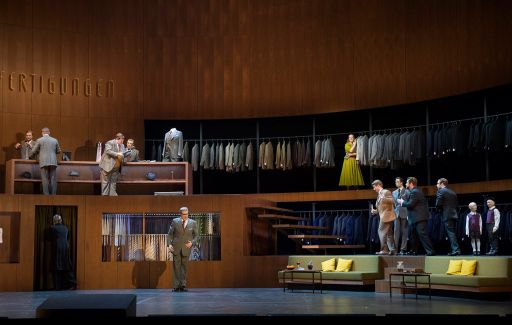 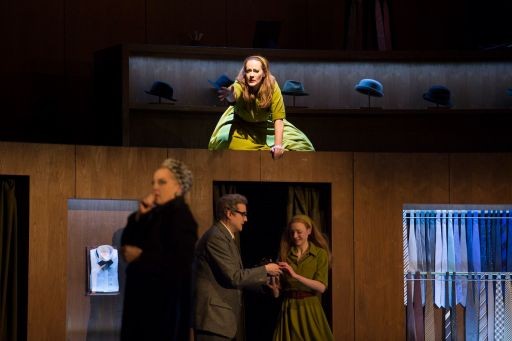 The once shocking combination of the Christian biblical theme, the erotic and the murderous of Salome by Richard Strauss does not pose a problem for today’s audience to accept it but opera producers to stage it. I am not talking about finding the right singer for the title role who is able to sing with the stamina and power of a Wagner heroine, act like a young girl and perform the erotic Dance of the seven veils. Nowadays every producer tries to find his own approach to the story and sometimes fails in telling it as it is. Claus Guth’s attempt is an example for that and he is likely to be in line with another two productions of Salome in Berlin over the last decade: Achim Freyer’s at the Deutsche Oper as well about 10 years ago and the cartoon-like one at the Komische Oper in 2011. Both saw a few repetitions only unlike the nearly 40 year old production by Harry Kupfer at the Deutsche Staatsoper Berlin that has meanwhile acquired cult status. Guth’s focus is obviously child abuse: Salome appears most of the time with six look-alikes who differ in age and tallness and seem to become angels standing around her when she sings the last passages of the final scene. Jochanaan turns into a copy of Herodes throughout the performance and even his head looks like Herodes’s at the end suggesting murder of the step-father. This approach may not be so far-fetched but it does not justify what takes place during the rest of the opera night. It seems to be a new story told by Guth: Herodes is a successful entrepreneur who sells made-to-measure suits, shirts and ties at a plush shop (stage and costumes by Muriel Gerstner). Apart from the suggested child abuse he lives with Herodias and Salome in a supposedly harmonious 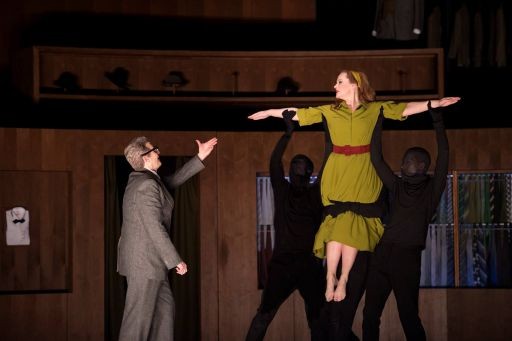 patchwork family having dinner together at a neatly laid table. Salome’s world is limited to her stepfather’s enterprise and she starts to create a world of her own between real people and shop-window dummies. Jochanaan appears in underwear from under a heap of clothes to be dressed like her stepfather by the six Salome look-alikes. Perhaps he is just a product of her imagination, at first still a prophet with his (or Salome’s?) convictions to develop into a copy of her step-father. Like that it appears logical that Salome rips the head off a dummy for the final scene and is helped into a trench coat to leave the shop and her family at the end, possibly as an emancipated woman. The producer creates a new story line that does not have too much to do with the plot of the opera and it seems to me that he wants to provoke by that. He pulled it off indeed as he was heavily booed along with his production team in the end. The premature sexual desires and fantasies of the Princess of Judea are as missing as the religious components of the story. The Jews and Nazarenes appear as customers of the suit shop and show interest in Herodes’s step-daughter rather than the famous prophet. Whatever came from the orchestra pit on that night was more enchanting. Technically the Orchester der Deutschen Oper played very well under the baton of Alain Altinoglu who focused on a loud, rough and broad rather than differentiated erotic sound. Thus the shimmering oriental night did not take place in the music which sounded like Wagner rather than Strauss. The singers managed that in different ways. Noel Bouley and Paul Kaufmann stood out in the musically demanding scene of Jews and Nazarenes. Thomas Blondelle is 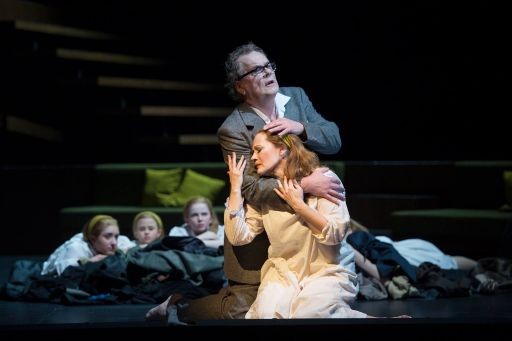 a vocally attractive Narraboth. His light but powerful tenor can cope very well with the orchestral floods. As a character he is reduced to robot-like movements but at least more or less visible on the dark stage at the beginning. The Page of Annika Schlicht however remains completely in the dark but is vocally convincing with her beautiful mezzo. How attractive the young singer is you can only tell from the curtain-calls. A member of the company with outstanding merit is Burkhard Ulrich and I recall his fabulous Mime. His Herodes is quite as thrilling with his good diction and as a rare representative of a Charaktertenor, he sings all top notes that often fall short when the role is sung by an elderly Heldentenor. Chapeau! Jeanne-Michèle Charbonnet is a still attractive femme fatal as Herodias in a pantsuit and with a strict hairdo but she fails vocally. Having been the Elektra in Kirsten Harms’s widely acclaimed production of the other bloodthirsty one-act opera by Strauss a couple of years ago,  you could expect a few highly dramatic moments such as a perfect coping with the climactic phrase “ich will nicht haben, dass sie tanzt!”. Quite the contrary. She does not even have any sonorous lower tones for other prominent passages. As one of the best baritones these days, Michael Volle does not have any problems with vocal power or the unpleasant tessitura of the part of Jochanaan despite the fact that he is blithely neglected as a character by the director. Diction is the weakest point with Catherine Nagelstad who adds to the reasons for surtitles. She tackles the title role as a Wagnerian soprano, which corresponds to Altinoglu’s conducting. Announced as indisposed due to a bruise of her ribs, she made a few alterations to her acting and dancing but her singing was hardly affected. I would call hers an American all-round voice. While she is able to sing every note with power and stamina and her upper and lower registers falling slightly apart, she does not leave much vocal impression. Altogether she is not a match for former great Salomes from the highly erotic Ljuba Welitsch via the passionate and glowing Inge Borkh, the gripping Christel Goltz, the archaic Birgit Nilsson, the suitably hysterical Leonie Rysanek to the girlish and neurotic Anja Silja. Photo ©Monika Rittershaus 2016