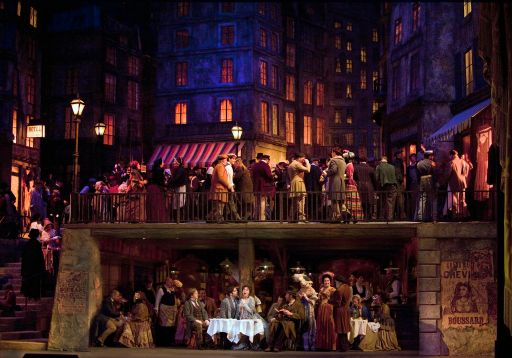 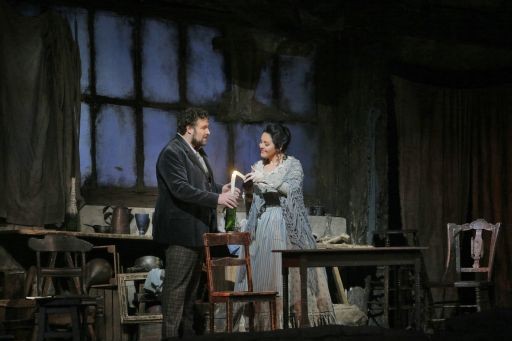 La Bohème has been given at the Met far more often than any other opera, and the current, ancient Franco Zeffirelli production (which replaced a different Franco Zeffirelli production) has probably been put on the stage more often than any other show. Certainly, it is a painless way to introduce new singers to the Met in roles already familiar to them—thus, in this mid-season performance, the season’s second cast featured house debuts performing Mimì and Colline. But the whole overelaborate, overpopulated production has become mechanical and joyless; nor is it as popular as it once was: There were clumps of empty seats here and there. Yet if old-timers were weary, the young audience to whom the current Met management plays its hands appeared to be happy, puzzling (I overheard them) during 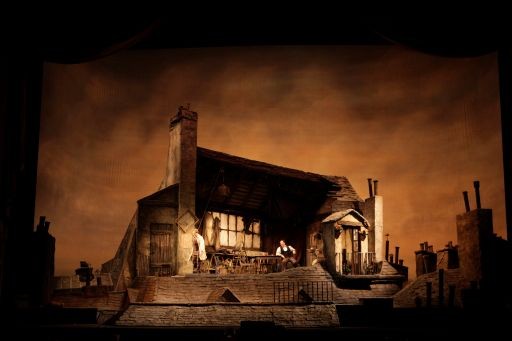 intermissions which character corresponded to the more familiar ones in Rent. For old opera lovers, there was the singing, across the board at as high a level as it is likely to reach all year. Maria Agresta, who sings just about everything around Europe (Norma and Elvira in Paris, Violetta, Desdemona and Mimi all over Italy and Austria, the Oberto Leonora whenever it is revived, even Donna Elvira in the Verona Arena), was making her long-awaited Met debut. I was particularly eager to hear this singer and was not disappointed. The voice is of a thrilling size, undaunted by the size of the theater, and a warm, Italian color, a true spinto in the Tebaldi-Gencer-Millo line. Her acting is reserved in her first, flirtatious scenes—Mimì may be poor as a church mouse, but she’s a lady church mouse—more intimate as their relationship intensifies. Her phrasing is natural and with her “primo bacio dell’aprile,” the sun shone in her upper register, as it should. Too, she is a pretty woman, robust for a Mimì unless one remembers Caballé in the part. I hope she will sing many more interesting roles for us soon. Bryan 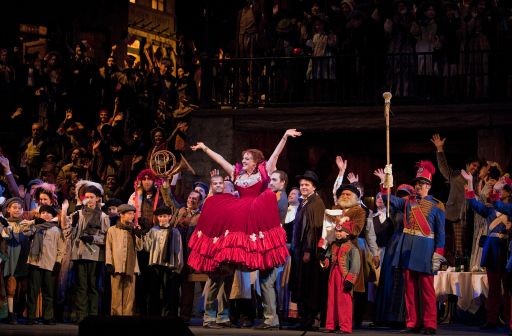 Hymel made his Met debut as Berlioz’ Enée, and he has indicated his preference for that repertory with his highly successful “Heroïque” album; to give him Pinkerton or Rodolfo seems either a waste or luxury casting, depending on your point of view. He certainly makes a robust and handsome poet for any Mimì to rest her head on, and he sang ardent, arching phrases with an unforced top, though lacking an ideal liquidity of sound.  It was impressive enough that he seemed unintimidated by his Marcello, the equally robust and broad-shouldered Quinn Kelsey. The Hawaiian baritone is the real deal we have lacked for so long, the possessor of a warm, superbly produced and Italianate sound that filled the house effortlessly. There is no baritone role in the Verdi canon that I would not be thrilled to hear Mr. Kelsey take on. As a background to the soaring musings of Mr. Hymel, he was like a plush sofa on which the Hymel tiger-cat 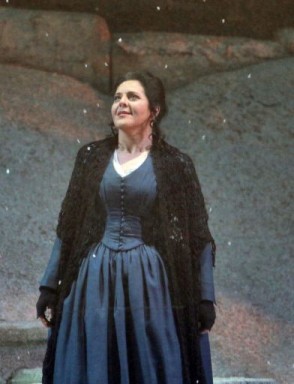 could curl up and purr. I wish Agresta, Hymel and Kelsey were singing the Met’s Simon Boccanegra this spring; they’d bring it to life. The other Bohemians were David Pershall, a lively Schaunard, and Kihwan Sim, a Korean bass making his debut as Colline. Mr. Kim seemed a trifle stiff as an actor and a bit stiff in the serio-comic farewell to his coat, but he proved his worth with a dark, distinguished sound of notable size. Benoit and Alcindoro, doubled in this production, were performed by veteran buffo John Del Carlo, whose voice still permits him to sing rather than (like so many Benoits) squeak and babble through the comedy.  Susanna Phillips, better known for her Mozart and Handel, returned to Musetta, the role of her Met debut. Hers is a nicely etched performance, not too whorish, not too prim, using her fioritura to tease and annoy at the same time. Her little prayer at the end of the opera made a pleasing effect. The overpopulated Zeffirelli shenanigans went off with an impressive lack of spontaneity, but unlike the leads, they’ve been doing this all autumn. Alcindoro’s return (with shoes) to pick up Musetta’s bill has been, for some reason, written out of the show, or else I was looking somewhere else. Dan Ettinger led the orchestra and in the first two acts seemed not always perfectly in sync with his singers, who were perhaps less well rehearsed than the pre- 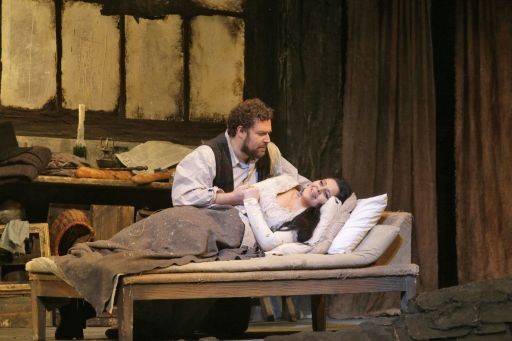 Christmas crowd. One unusual pleasure, here as in the other older productions at the Met is that the singers perform their arias from the middle of the enormous stage and not poised on the edge of the orchestra pit. The extra distance gave none of this cast any problems of audibility or clarity. I do not know if it is the insecurity of younger singers or the peevishness of directors or the insistence of conductors that causes the edge-of-the-stage phenomenon to occur, as it does, whatever the opera. Photo Ken Howard/ Metropolitan Opera