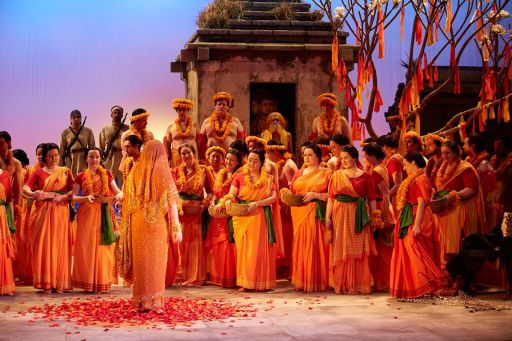 Sydney, Joan Sutherland Theatre, Sydney Opera House
“LES PÊCHEURS DE PERLES” (The pearl fishers)
Opera in three acts, libretto by Eugène Cormon and Michel Carré.
Music by Georges Bizet
Nadir PAVOL BRESLIK
Zurga JOSÉ CARBÓ
Nourabad  DANIEL SUMEGI
Léïla  EKATERINA SIURINA
Australia Opera and Ballet Orchestra Opera Australia Chorus
Conductor   Guillaume Tourniaire
Director Michael Gow
Designer   Michael Kemp
Lighting Designer   Matt Scott Fight
Movement Coordinator  Scott Witt
Sydney. 22nd January, 2016
A colonial setting for The Pearlfishers. Bizet’s The Pearlfishers is surprisingly one of the most popular operas in Opera Australia’s repertoire. This new production is the second in a decade.  The soulstirring  baritone/tenor duet, “Au fond du temple saint”duet was used to great emotional impact in the iconic Australian film Gallipoli by Peter Weir, and despite the acknowledged weaknesses to plot and construction, the opera seems to retain a fervent hold over the Australian public, as seen by the enthusiastic, capacity  audience at the second performance on Thursday 21st January. The well-known Australian playwright and director, Michael Gow, introduces a different slant to the traditional  exotic and colourful Ceylon setting by introducing the strong element of Ceylon’s colonial past. The three main male characters become respectively a hunter, a colonial pearl merchant and a profiteer. The transformation of Nourabad from a wicked Brahmin priest to opportunistic colonial trafficker, however, replaces old dramaturgical problems and inconsistencies with new ones. In this case, a wizened Brahmin priest extra seems rather lost as he wanders aimlessly around the stage fulfilling a function that had been Nourabad’s.  On the other hand, the decaying colonial architecture underlined the associations of Western oriental fantasy, certainly in vogue in the period of the opera’s creation. The chorus was placed untheatrically in static blocks. It emphasized the already episodic nature of the first act music, surely a remnant of the operas original singspiel  predestination.  The dramatic interaction of the cast became more consequential and spontaneous in the second and third acts as the musical construction became more fluid. Michael Kemp‘s sets were evocative, tasteful and monumental with a cheeky concession to a flashy, foil sea. The hardest task in the Sydney Opera Hall is to give sense of space and depth on such a narrow, shallow stage, which he managed admirably.
The opening background blue sky gave a flat, stagy effect but  as the opera progressed the lighting effects of Matt Scott illuminated and deepened the backdrop with beautiful sunsets and star studded deep blue nights. His subtle, warm lighting enhanced the beautiful gold, orange, tangerine shades of the native costumes and the shabby chic of the colonialists.  The pearlfishing villagers themselves were  uncharacteristically  pale and physically incompatible with their athletic activity.  The makeup and costumes did nothing to disguise this fact.  If anything their sarongs and jet black wigs emphasized it, and the Asian features, form, grace and athleticism of the fighting dancers, effectively choreographed by Scott Witt, underlined it even more.   Unfortunately, due to the theatre’s acoustics, the eloquence of the string playing cannot be enjoyed in the middle of the stalls. The sound was faint. But from the clean,  balanced, sound of the  wind, brass and percussion, their delicate and sensitive phrasing and the fact that their full sound never covered the singers, it can be surmised that the strings were in harmony with them. The ebullient Guillaume Tourniaire conducted them with finesse and passion and without even the slightest misalignment between stage and pit. The undisputed star  was Ekaterina Siurina as Leïla.  She dominated the evening vocally.  Her coloratura was precise, strong and rippling, her lyric warm and luscious with a hint of pathos, her dramatic vibrant and expressive.  Her singing was delivered with poise and refinement, exemplified in her reflective aria “Comme autrefois dans la nuit”.  Daniel Suregi as Nourabad also gave a commanding performance.  A most convincing figure, he draws attention by his physical stature but more importantly, by the logical and enticing manner of his reaction and interaction even as an auxillary character.  His beautifully even, rich voice matched his stage presence; solid, firm, easy and authoritative.  Pavol Bresik‘s small voice lacked the mellow expressiveness to transmit the passion and conflict of his romantic character Nadir. However his extensive and smooth range, clear articulation, clean emission and breath control allowed him to sustain the repeatedly high tenor register, often in mezza voce, with impunity, particularly noteworthy in his aria “Je crois entendre encore”.
José Carbó as Zurga is dramatically engaging and convincing in his role as the colonial pearl merchant.  His scenes were performed with intensity and drama although at times a tendency to push the sound resulted in an uncontrolled waver. This production of The Pearl Fishers can still be enjoyed at the Sydney Opera House  for 14 more performances until 12th March. Photo credit: Keith Saunders