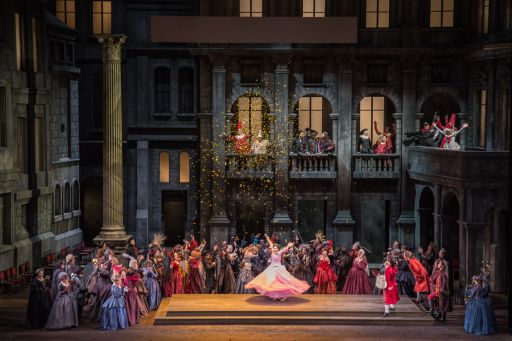 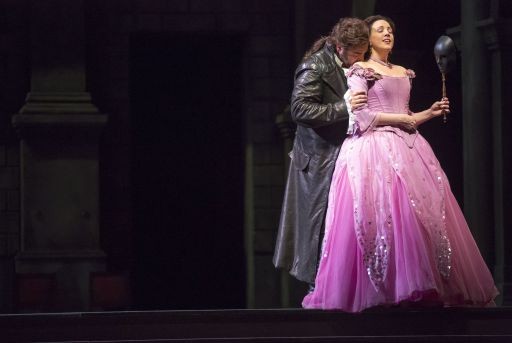 Charles Gounod is the operatic composer who “takes a licking and keeps on ticking.” With the possible exception of his fellow countryman Jules Massenet, no other composer whose works are regularly played by the world’s great opera houses has earned the scorn and contempt of critics and scholars alike. Drawn to subjects of cosmic depth, Gounod treated hallowed works of literature and spoken theater in ways that have been found wanting in matters of profundity. Neither a blazing innovator like Richard Wagner nor an aggressive advocate for change within tradition like Giuseppe Verdi, the French master can seem hopelessly passé. And yet each successive generation of singers is thankfully beguiled by Gounod’s unmatched gift for inspired tunefulness, epitomized by his most famous work Faust. According to M. Owen Lee, “the case for Faust will always rest on its melodies, some of the most beautifully crafted, luminously scored melodies ever written, melodies that stay in the memory as good melodies should, and also delicately etch the characters.”  Much the same could be said of 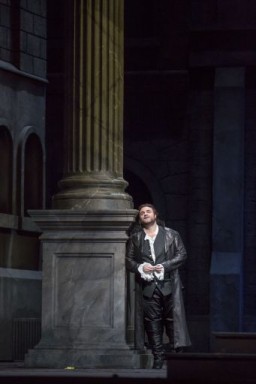 Gounod’s second-most performed title Roméo et Juliette–although its competing charms were so beloved by both singers and audiences that they threatened to eclipse the supremacy of Faust as the world’s most popular opera by the close of the 19th century. Reviewing an 1889 performance of the Shakespeare-inspired work, George Bernard Shaw succumbed to “the spell of the heavenly melody, of the exquisite orchestral web of sound colors, of the unfailing dignity and delicacy of accent and rhythm.” Closer to our time, Andrew Porter noted: “I never hear Romeo without thinking what an excellent piece it is—tender melodies, exquisite scoring, refined craftsmanship in all its workings.” Lyric Opera of Chicago’s current production of the opera reflects all these virtues but is primarily noteworthy for its theatrical values and dramatic cohesion.
Bartlett Sher’s stage direction was laudable for its fluency and focus. A long, sprawling work was here delivered with razor-sharp precision in just less than 3 hours. The familiar tale of young love doomed by an ancient feud between the warring Capulet and Montague families unfolded seamlessly in Michael Yeargan’s unit setting, an open square before the gloomy, brooding façade of a Renaissance palazzo. Catherine Zuber’s “Carnival of Venice” costumes proved the perfect counterpoint, setting the stage picture ablaze with color and elegance, their timeless quality adding to the allegorical richness of the famous plot.  Sher coached performances of great interpretative detail and psychological richness from his cast. All the relationships were sharply etched, not just the central pair of lovers, and benefitted from a freshly considered approach to what often passes for standard operatic business. What dramatic innovations there were arose organically from the material, as when Juliette enlisted Romeo’s reluctant hand in completing her suicide—a moment of devastating realism. Not everything proved convincing, 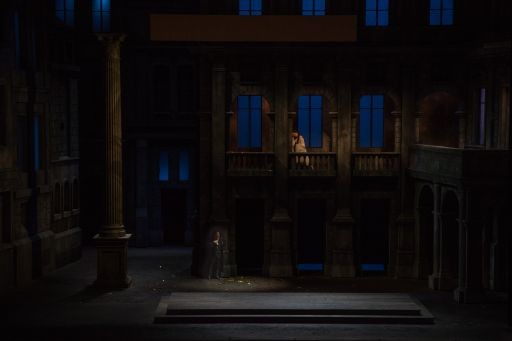 particularly the “Diamonds Are a Girl’s Best Friend” production number approach to Juliette’s widely known Waltz Aria, a moment of virginal innocence inexplicably played out here before an audience of leering men. But this was a rare misstep in a staging notable for emotional logic. Sher was well aided in his efforts by Chase Brock’s choreography and B. H. Barry’s fight direction, their contributions adding panache and tightly coiled aggression to the public scenes. Jennifer Tipton’s atmospheric lighting served to bind all these elements together in storytelling of inexorable sweep and truly Shakespearean chiaroscuro. In the title roles, Joseph Calleja and Susanna Phillips proved a curiously mismatched pair, him ardent of voice but a woodenly prosaic actor and her ideally lithe and youthful in appearance but vocally out of sorts. Calleja’s old school tenor, with its distinctively rapid vibrato and house-filling impact, is not conventionally beautiful but stylistically well-suited to the 19th century Romantic repertoire. However, Calleja seemed unsettled at times, the famous aria “Ah! Lève-toi, soleil!” marred by a limited dynamic palette ranging from loud to 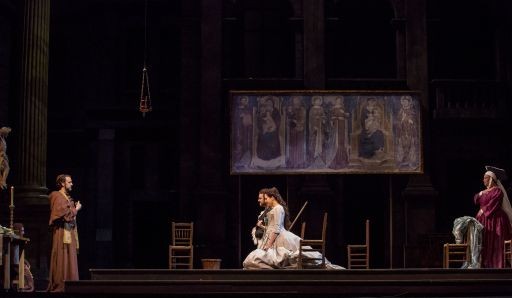 louder, inconsistent legato and abruptly cut off phrase endings. Even more worrisome was the high C near the end of the “Ah! Jour de deuil” ensemble, here a thin, almost falsetto-like approximation of what must be a note of clarion catharsis if it is to have any musical or dramatic function. Even so, Calleja came off like a tower of vocal strength in comparison to his leading lady. Phillips fought a losing battle with her upper register throughout the performance, the high notes screamed, glassy in timbre and falling painfully on the ear. This was all the more regrettable when set besides her other considerable merits. Phillips possesses a middle voice of melting limpidity and mountain spring purity. Her voice floated ravishingly in the less taxing sections of the wide-ranging role. Furthermore, she offered an assured, absolutely convincing portrait of headstrong adolescence, moving from fluttering girlishness in the early scenes to darkly tragic grandeur in the final act. While no 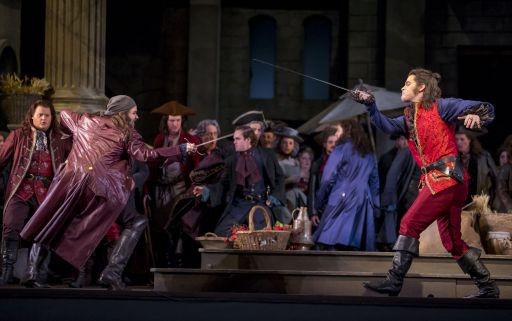 announcement of indisposition was made, it is hoped that Phillips’ vocal shortcomings are temporary in nature. She is too young and valuable an artist to lose her way permanently.   In other parts, Joshua Hopkins made a mellifluous Mercutio, tossing off his Queen Mab aria with verbal and musical dexterity. However, his Johnny Depp as Captain Jack impersonation needed toning down. Christian Van Horn sang sonorously as Frère Laurent and found notes of Machiavellian cunning in his portrayal. Marianne Crebassa was an unusually persuasive Stéphano, impetuously acted and impressively secure in the challenging tessitura of this trouser role’s mocking serenade. Philip Horst was a wobbly, vocally worn Capulet but embodied his role with conviction while Jason Slayden’s menacing Tybalt seethed with palpable hatred. Rounding out the large ensemble were a competent if somewhat faceless group of singers, including Takaoki Onishi as Paris, Anthony Clark Evans as Gregorio, Mingjie Lei as Benvolio and David Govertsen as the Duke of Verona. However, Deborah Nansteel managed to inject a rowdy sensibility into her scenes as Juliette’s nurse, Gertrude.  Conductor 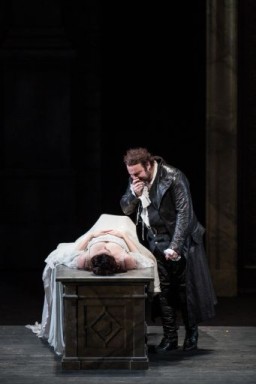 Emmanuel Villaume was a lively presence on the podium, moving the proceedings along with a bracing sense of propulsion. If he was occasionally too brusque in this regard, he understood the value of judiciously used rubato, no more so than in the gorgeously judged melancholy section of Juliette’s Waltz Aria (“Loin de l’hiver morose.”) The Lyric Opera Orchestra responded to his leadership with playing of refinement and finesse. The various preludes and interludes never registered as longueurs and showcased to perfection the sound colors Bernard Shaw found so exquisite. The chorus made an imposing impression from the very beginning with its incisively sung Prologue and was an essential piece of connecting tissue throughout.   In summary, this production Roméo et Juliette succeeds through the brilliance of its stagecraft rather than a less than ideal, if still intermittently rewarding, pairing of artists as the star-crossed lovers. Photo Andrew Cioffi