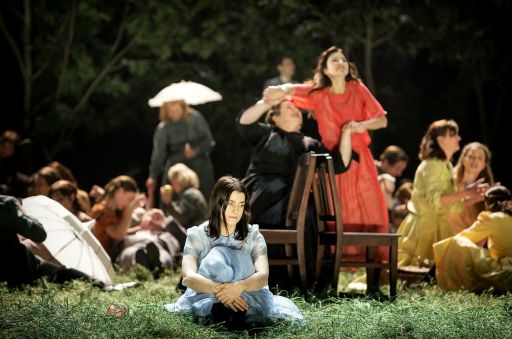 Eugene Onegin by Pyotr Ilyitch Tchaikovsky is a dream of good old Russia. Russia of Pushkin, Tolstoy, Chekhov… I think that is what director Berrie Kosky had in mind about his new production of the opera at the Komische Oper Berlin. The result is absolutely convincing and turns out the best I have seen in Berlin over the last few years. Kosky concentrates on the intimacy of the lyrical scenes, lets the actors stand out by spotlights and even interrupts the musical flow once in Onegin’s first aria for Tatyana to drop the dishes and kiss him without a return. That comes about so naturally that it cannot be considered too much of director’s freedom. The central element of Rebecca Ringst’s stage is a grass meadow partially hand-made on historic looms in Saxony and lined by tall deciduous trees in the background. All action takes place here with deliberate use of the revolving stage. A luxurious classicistic room is put up for the ball scene of the third act to be dismantled again on stage for the finale in the same setting of the first scene including the fog. It ends up with a rain shower to get Tatyana and Onegin wet through. Tatyana’s posh outfit is a bright red dress (costumes by Klaus Bruns) contrasting the light blue summer dresses she wears in the first two acts. Olga has similar dresses in red on while the garments of Larina and Filippyevna are traditionally black. Onegin is dressed in plain but elegant brown suits and Lensky’s suit is bright blue. Tatyana’s name day is not celebrated in Larina’s manor house but as a midsummer torch light party on the grass and the subsequent duel scene lacks all clichés of a Russian winter landscape. Like in a film one scene is followed by the other. Thus Kosky can fully focus on the relationships between the four young people. One of the highlights is undoubtedly Tatyana’s letter scene. She is in the beam of a spotlight sometimes stepping out of it into the dark to collect her thoughts or turning round to sing towards the backdrop while moving her arms and fingers on her back. She does not write a letter but underlines passages in her book she has carried around like a beloved doll or toy to tear the marked pages out eventually to put them in a jam jar to be delivered to Onegin. In the final scene she happens to find the jar again in the grass, pulls out the jam-stained pages and tears them to pieces that she throws towards him. The Orchester der Komischen Oper Berlin is not quite up to the level of the production. Its principal conductor Henrik Nánási makes them play accurately all right with a slightly shrill sound at the beginning. He pays attention to the singers most of the time even though the sound becomes extravagantly big during Gremin’s aria and the singer can hardly assert oneself vocally. The musical flow turns out monotonous or tough at times when rhythmic clarity is required such as in the dance scenes or burning desire in the lyrical passages. It is not the first time that Berrie Kosky has broken the tradition of the Komische Oper Berlin by having Eugene Onegin sung in Russian. It does Tchaikovsky’s masterpiece a tremendous favour and allows him to round up a group of excellent young singers he would probably not have found for a production in German although the title role is sung by Günter Papendell who has been a member of the company for nearly 10 years. He looks handsome, has a beautiful voice but sings in vague Russian. His baritone is balanced, even and sonorous. The singer does not have any vocal problems but sticks to the score at the end of the ball scene unlike lots of baritones who show off some extra top notes there. It is sheer luck to have a Tatyana like Asmik Gregorian. She is ideal for the role: young and slim with a striking appearance and her distinctive soprano with a slightly Slavonic touch seems to be made for it. The voice sounds poetic and gushing in the letter scene as well as determined and dramatic in the finale. Her “Akh kak mne tjazhelo” makes your flesh creep. Born in the former Soviet Union she is absolutely idiomatic. The young Czech tenor Ales Briscein is a wonderful Lensky. The part can hardly be sung better these days. Briscein’s voice is light, soft and easily capable of more dramatic moments. His “open” singing which is typical of the Russian vocal school makes him almost be in a line with former Russian tenor titans such as Ivan Kozlovsky and Sergei Lemeshev. The fact that he started the famous “Kuda, kuda vy udalilis’” a little too dramatically may be attributed to première stage fright. Karolina Gumos is a highly appreciated member of the company and I gladly remember her Octavian full of zest. She uses her flexible mezzo-soprano for an Olga in high spirits and takes advantage of beautiful lower notes. The nanny Filippyevna is usually cast by a mature mezzo-soprano or contralto beyond the climax of her career. Margarita Nekrasova is quite the contrary! She has a plush and warm mezzo and naturally produces low notes that are inaudible with most other singers of the role. Among the Russian-speaking singers she is the one with the most distinct and clear pronunciation. Prince Gremin is impeccably sung by Alexey Antonov whose bass is sonorous but not black enough for my taste. As mentioned before it is not the singer’s fault that he was partly drowned by the orchestra. Christiane Oertel adds the landowner Larina to her wide-ranging repertoire successfully. Triquet is adequately sung by Christoph Späth who makes most out of the couplet and Yakov Strizhak’s most idiomatic Zaretsky is worth mentioning. Altogether Berrie Kosky has hit the nail on the head with this production which is very likely to last in the repertoire of the Komische Oper for long. Photo Iko Freese