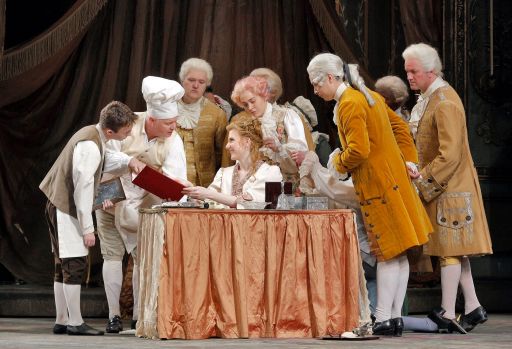 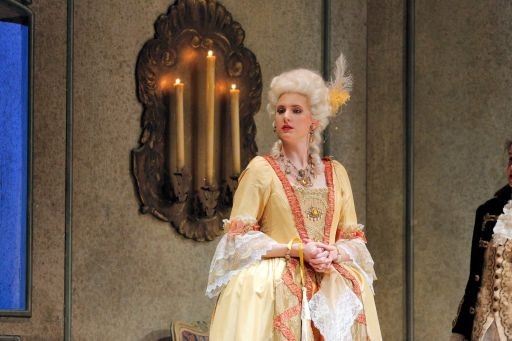 The legendary soprano Lotte Lehmann is buried in a place of honor in Vienna’s Zentralfriedhof cemetery. Her tombstone is inscribed with a quote by Richard Strauss, the composer with whom her name is inextricably linked: “When she sang, she moved the stars.” Perhaps he was thinking of her performance in Ariadne auf Naxos, a work that is very much about moving the stars, or more specifically, the transformation of the mortal princess Ariadne into an eternal constellation, placed in the firmament by the god Bacchus to remind all human beings not simply of their journey from life into death but to function as a symbol of when humanity encounters divinity, that moment of transcendence provided by art and music, a glimpse of the eternal beyond death and decay, what Goethe described in his Faust as the zenith of human happiness, a moment beyond time where like Faust, we might exclaim: “Linger on, thou art so fair.” Strauss’ Der rosenkavalier is work with several of these moments, especially the iconic Presentation of the Silver Rose (itself a metaphor for immortal joy) and the celebrated Final Trio.  “Verwandlung” or transformation was a dramatic motif that held particular meaning for both Strauss and his frequent librettist and collaborator, Hugo von Hofmannstahl. One of Strauss’ earliest tone poems was called “Death and Transfiguration” and he quoted one of its radiant melodies in the conclusion of his final composition, the elegiac Four Last 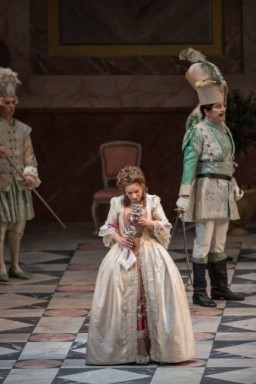 Songs. During the Allied bombing of Germany, Strauss wrote a piece for strings called “Metamorphosen” or transformations.    This theme of transformation resonated strongly with both men and they would create a series of memorable characters which embody what M. Owen Lee calls “Nature’s irrevocable law: ‘transform yourself or die.’” Consider Chrysothemis in Elektra, the disgraced Mycenaean princess who is willing to mix her noble blood with that of a peasant in service of bearing children and fulfilling her preferred destiny as a woman. Or Arabella, who bids farewell to the joys of maidenhood before marrying “Der Richtiger” or the right man, thus saving her impoverished family from ruin. All these characters must adapt themselves to the unfolding realities of life or die. But it is the Marschallin in Der rosenkavalier who most profoundly communicates this imperative and her journey of personal renunciation and psychological sublimation has moved audiences for generations.    The Marschallin is a part of endless fascination and has rightly been called a “destination role” for imaginative sopranos (and mezzo-sopranos) of a certain maturity, if not necessarily age. According to Gramophone critic James McCarthy: “Any questions around the Marschallin’s emotional temperature are answered at the end of Act One, when she has sent her young lover away and contemplates her age in the mirror. Lotte Lehmann dropped hers. Elisabeth Schwarzkopf recoiled at her reflection. Felicity Lott turned her back and, upon facing the stage again, somehow aged 10 years.” Amanda Majeski was Lyric Opera of Chicago’s choice for its recent revival of the Strauss work and her radiant portrayal represented a destination reached, approaching the hallowed standard of these venerated predecessors.   A classic performance of the Marschallin must possess two important qualities:  poised, silvery lyricism for the role’s musically expansive moments and a fleet, fluent approach to the long conversational sections of the score.  Most interpreters split the difference but Amanda Majeski 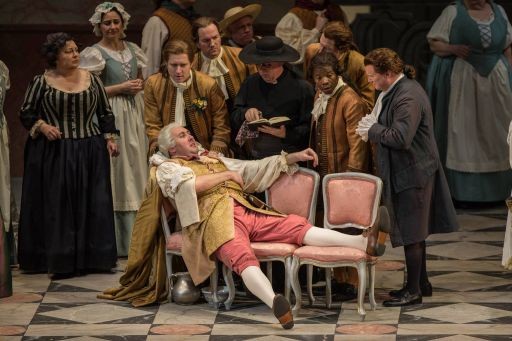 held both requirements in a glorious unity.  Her voice was an instrument of incandescent beauty, glowing, opulent and silken in tone, delighting in the many opportunities Strauss gave his soprano for optimal display.  But her performance was more than a collection of pretty sounds.  Majeski made the all-important text come alive through her alert, nuanced and subtle response to each shift in the character’s mercurial moods.  Given the interpretative skills required, the Marschallin is usually cast with a singer considerably older than the role’s stated 32 years of age.  As if made to order, Majeski is exactly the chronological age of her character but lacked nothing in patrician bearing, deft wit, textured elegance or sophisticated assurance, alternating moments of hauteur with heartbreaking tenderness and vulnerability. Benevolence and generosity of spirit were the finishing touches in Majeski’s memorable take on the part.  All she needs now is a stronger directorial hand and further opportunity to deepen and elaborate what is already a breathtaking achievement.
In the title role, Alice Coote functioned on a somewhat lower plane of accomplishment. An earnest performer, Coote cannot be faulted for seriousness of intention.  But her galumphing boisterousness was at odds with the aristocratically dashing young nobleman implied by the libretto; indeed, this clodhopping physicality found a more suitable outlet in her amusing portrait of Mariandl, the fictional chambermaid impersonated by Octavian.  Vocally, Coote was on firmer ground, her creamy mezzo-soprano more than equal to the wide-ranging vocal writing.  Occasionally, some hardening of timbre and loose vibrato could be heard in the upper register but she used a wide dynamic palette throughout and phrased with distinction.    In an impressive role debut, Matthew Rose almost managed to make Baron Ochs the work’s true protagonist–in much the way Strauss and Hofmannsthal originally intended him to be.  With his towering presence, potent bass and palpable virility, Rose exuded an easy yet dangerous 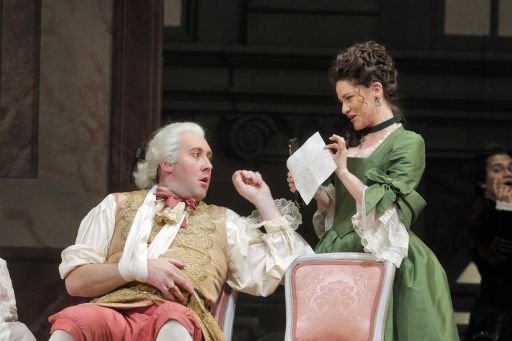 sense of entitlement.  For once, it did not seem like a foregone conclusion that the lecherous Ochs would lose the girl.  Rose kept the dramatic stakes high with an edgy involvement, peppering his characterization with generous amounts of ‘manspreading’ and nervous physical energy.  As his betrothed Sophie, Christina Landshamer scored points for her ravishing but never cloying delivery of the high-lying phrases that have become the signature feature of this role.  Her portrayal was simple but without simpering.  As Sophie’s father Faninal, Martin Gantner earned sympathy with his genial depiction of the easily overwhelmed bourgeois gentilhomme.   Patrick Guetti‘s Police Commissioner was handsome in both voice and appearance and took command of the action as needed while Rodell Rosel‘s acidic Valzacchi and Megan Marino‘s venomous Annina made for an effective pairing as the Italian intriguers. Jonathan Johnson managed to be both cunning and befuddled as the Innkeeper but René Barbera‘s mellifluously sung account of the famous tenor aria was marred by shameless overacting.  The music is parodic enough without the singer ‘goosing’ the material.  Laura Wilde‘s Marianne Leitmetzerin was both fun and fun-loving, her attractive soprano free of the clucking and wobble that so often passes for a “seasoned” rendering of this difficult role.  Rounding out the extremely large cast of singers and mimes, Hlengiwe Mkhwanazi, Lindsay Metzger and Annie Rosen made a delicious moment of the Noble Orphans’ appearance during the Marschallin’s morning levee, while veteran Philip Kraus brought expert comic timing to his portrayal of the wheezing Notary.  Diana Newman‘s opportunistic Milliner and Alec Carlson‘s attentive Animal Trainer also added to the tableaux-like detail of the levee scene.  Finally, Mingjie Lei and Matthew DiBattista both struck the right note of stuffy officiousness as the Marschallin’s Major-Domo and Faninal’s Major-Domo, respectively.  In what is certainly the most spectacular conducting debut in the company’s recent history, Edward Gardner had the Lyric Opera Orchestra performing like a world-class ensemble.  The strings and brass especially outdid themselves with playing 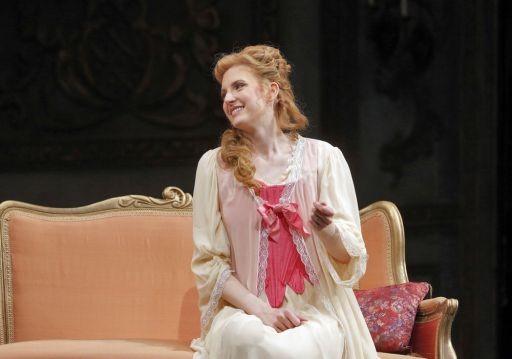 of soaring intensity, mellow warmth and admirable precision.  But Gardner’s collaboration with the artists onstage was also worthy of the highest praise.  In just one notable example, Gardner accompanied Majeski to perfection in the long sequence of monologues by the Marschallin near the end of the first act.  Here conductor and singer functioned as one artistic psyche, blending narrative and subtext into an episode of riveting focus.  Time, which is at the heart of the opera’s message, really did seem to stand still.  Martina Weber‘s direction was standard routine but at least it was well-rehearsed routine.  She had the good sense not to obscure the strong contributions of the principal singers and laid out the story clearly with engaging stage pictures.  One horrid and blessedly isolated “innovation” early in the action:  a servant entered the Marschallin’s boudoir after the prelude to part the curtains–with the princess and her young lover laid out on the bed in full post-coital bliss!  Given that no other shockingly awful additions were made to the standard directions, I have to wonder if this was a costumed stagehand sent out to rectify some problem needing attention.  In any case, it made for a jarring beginning to the proceedings.  Thierry Bosquet‘s traditional sets and costumes have seen better days but Duane Schuler’s lighting managed to preserve some of their former luster.  Stage band conductor Francesco Milioto added immeasurably to the aural pleasures with his superb contributions to the last act.   In summary, this production of Der rosenkvalier brought the 2015-2016 season of Lyric Opera of Chicago to a distinguished close.  In particular, it heralded the arrival of a great new Marschallin in the form of Amanda Majeski, who like her forerunner Lotte Lehmann, it could be said:  “When she sang, she moved the stars.”  In the process, she ennobled the opera’s themes of transcendence and transformation through her sublime artistry.  Majeski’s ascent into the ranks of today’s most exciting operatic talents has been rapid and one Chicagoans have been lucky to witness first-hand. Photo Cory Weaver/Lyric Opera of Chicago