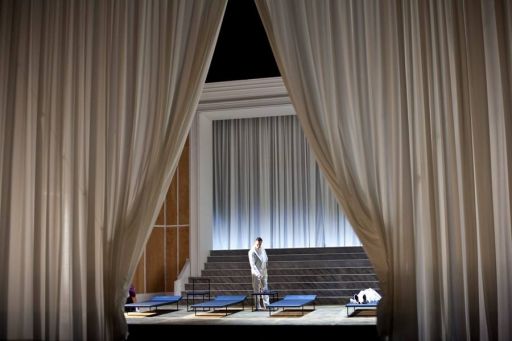 Leoš Janáček’s music can hardly be heard more pounding and raving than in his penultimate opera “Věc Makropulos” but it is at the same time bewitchingly sensitive. Already the prelude which is relatively long compared to others by the composer reveals what the 337 year old Emilia Marty suffers from: agitated melancholia of an eternal life and her longing for biographical identity. We can read the formula E.M. = me at the beginning followed by her many different names on a white curtain as if they were from a silent film of the 1920s when the action takes place. We see her with a little boy, obviously her son born long ago who she fails in dragging from the past to the present. David Hermann illustrates his production with characters from Emilia’s past lives in an attempt to explain the history of the “Makropulos Case”. Therefore Emilia is accompanied by five doubles who represent her at different times between the Renaissance and the end of the 19th century. Emilia seems to jump from one life to another, through time, identities and relationships. The pictures of her memories have mixed up and become blurred, which is repeatedly reflected by flickering lights and video projections. Light and video designers Ulrich Niepel and Martin Eidenberger make the rooms shake, crumble and dizzily rotate evoking some black and white film aesthetics of the 20s in the manner of Fitz Lang’s famous Metropolis also suggested by the underwear worn by Emilia and her doubles that reminds us of the machine woman in Lang’s film. Astonishingly enough, files are missing in the lawyer’s office of the first act and Kolonatý wears a white coat and gloves making him look like a doctor rather than a lawyer (stage and costumes by Christof Hetzer). The theatre rooms seem more appropriate with red curtains and artificial flowers in the second act and designer couches in the third on which the Emilia doubles are slowly dying with shaking movements after each of them has eaten up a copy of the much sought-after document with the recipe for eternal life. Extra rooms and windows open up sometimes for actions that happened in Emilia’s former lives or at the beginning of the last act, to show Prus’s dead son Janek right after the love scene between Emilia and Prus. While Emilia is still the mysterious famous singer in the first act Vitek’s daughter Krista is raving about, Hermann makes her become a sister of Lulu in the second when everyone desires her. She is pulling all the strings and has the power over all her admirers until Hauk-Sendorf shows up in a clown’s costume who had an affair with her fifty years ago when she lived in Spain under the name Eugenia Montez. All odds and ends of stage props may appear a little overdone and confusing at times but pave the way for an amazing final scene: Emilia opens another white curtain for the room of the first act where she finds her son and his father who is supposed to be the only man she has ever loved. This way Hermann leaves it up to the spectator if that is Emilia’s (happy) end or the beginning of another (unhappy) life. Musical director Donald Runnicles emphasizes the romantic and passionate aspects of the score rather than its stark contrasts. Altogether Runnicles conducting the Orchester der Deutschen Oper coincides with the roots of Janáček’s music in the 19th century and

the applause at the end confirms both the excellent orchestra performance and the appropriate musical implementation of David Hermann’s sensitive production. Evelyn Herlitzius who is a darling of the Berlin opera audience and the legitimate successor of the great Dame Gwyneth Jones (yet without her technical problems) gives her debut as Emilia Marty. The role seems made for her through her unparalleled ageless appearance alone. She is gentle and tough at the same time, girlish and demoniac, unprotected and hard-boiled. All that is reflected by her huge dramatic soprano that also excels in roles by Wagner and Strauss. Her voice sounds radiant and tends to be shrill, which is an asset for the complex Janáček heroine. Derek Welton’s powerful bassbaritone as Baron Jaroslav Prus is a vocal match for her. Ladislav Elgr is a handsome and highly idiomatic Albert Gregor whose partly narrow tenor is very well suited to the role. Doctor Kolenatý is sung convincingly by Seth Carico’s profound bassbaritone. The appreciated Wagner tenor of the 1990s Robert Gambill returns to the Deutsche Oper to give an impressive portrayal of the old lecher Hauk-Sendorf by still adding some heroic tones. The tenors Gideon Poppe as Janek and Paul Kaufmann as Vitek complete the cast harmonically as well as the idiomatic Jana Kurucová with her warm mezzo-soprano as Vitek’s daughter Krista. Photo Bernd Uhlig