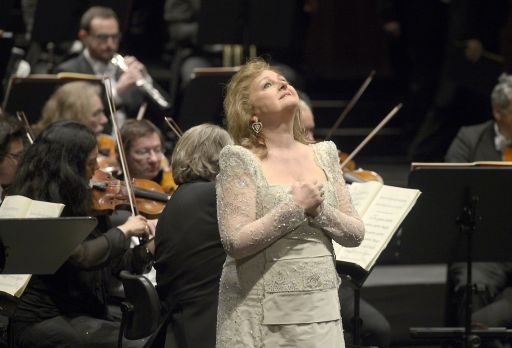 It is not the first time that Edita Gruberova has sung the title role of Norma by Vincenzo Bellini in a concert performance in Berlin. Despite her perfect vocal technique I was wondering whether she would still be able to manage the probably most difficult soprano part of the belcanto repertory. She will turn 70 at the end of this year and has had an extraordinary career for most of the last 50 years. In a nutshell, she appears, sings and is a triumphant success. As soon as she starts to sing “Casta Diva” in the original D major, it will become obvious what an exceptional singer she is and how ageless her voice. She has what belcanto is all about: excellent breath control for marvellous long vocal lines, miraculous floating piani, stunning glissandi, tastefully ornamented extra phrases, powerful top notes. Thanks to her amazing technique she is both vocally and stylistically perfect. I have never heard the cavatina so perfectly sung on stage. The audience are raving and there is no doubt it is going to be another great opera night with the last virtuosa as I like to call her. As a matter of course she repeats the cabaletta to crown it with a stupendous top note. But there is still a long way to go up to the tragic finale. As soon as it comes to the duets and the tricky trio with the climactic D’’’ at the end of the first act, there will be no one-woman show. She joins her partners to sing and interact with them so that there are great moments 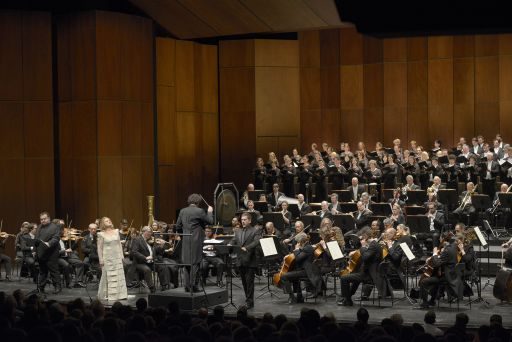 of musical harmony especially in the two duets with Adalgisa when the staccati fall out ideally synchronous. She brings the tenor to sing in a more differentiated way in “In mia man’” and the finale. She creates phrases of mesmerizing beauty but does not hesitate to add pale or otherworldly tones for the sake of an adequate interpretation. Like that the recitative at the beginning of the second act gets a touch of Lucia’s madness when Norma is about to kill Pollinone’s sons to realise after all that they are also her children, which makes her change her mind. Some might find Gruberova’s singing highly artificial or even mannered but where are her successors I have been waiting for over the last twenty years? Singers like her who make you completely forget how difficult a vocal phrase is or that a piano is sometimes harder to sing than a forte. This sort of effortless singing has become rare, sadly enough. A good example is Sonia Ganassi as Adalgisa. She can boast a beautiful mezzo-soprano that sounds homogeneous over two octaves but you can tell how much of an effort she needs to make to reach a top note or sing a tricky passage. Of course she does not want to fall short of virtuosity and sings a (rather short) C’’’ in the first 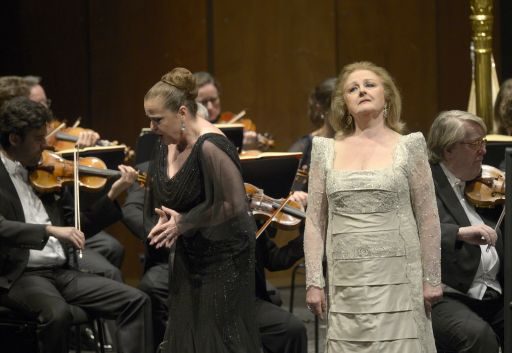 duet with Norma. Her diction is impeccable and her singing very cultivated compared to Fabio Sartori who tackles the role of Pollione with uniformly loud notes at least in the first part of the opera. So he is neither a seducer nor a vocal show-off as he omits the traditional ad libitum acuto in his aria. The duet Adalgisa-Pollione suffers from the slow tempo rather than the contrasting styles of the two singers. Oroveso is sung by the young Croatian bass baritone Marko Mimica who is a pupil of the famous Dunja Veizovic. His noble voice is in line with belcanto and sounds firm, resonant and full. The attractive Rebecca Jo Loeb has a luxurious mezzo for Clotilde while Attilio Glaser’s tenor sounds striking and promising as Pollione’s friend Flavio. The sound of the Chor der Deutschen Oper Berlin is homogeneous as usual thanks to chorus master William Spaulding but at the same time as loud as the exactly playing Orchester der Deutschen Oper Berlin conducted by Peter Valentinovic who unfortunately seems to mistake Bellini for Wagner. The introduction to the second act feels almost like “Parsifal” conducted by Knappertsbusch. The tempo is too slow sometimes and the rhythmic brio is almost missing in the ouverture. Photo  Bettina Stöß