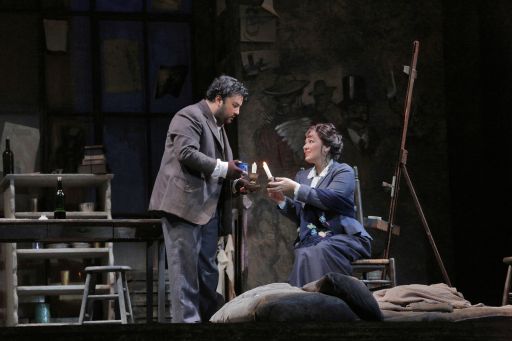 Los Angeles Opera, Season 2015-16
“LA BOHÈME”
Opera in four acts, libretto Giuseppe Giacosa & Luigi Illica
Music Giacomo Puccini
Mimì NINO MACHAIDZE
Rodolfo MARIO CHANG
Musetta JANAI BRUGGER
Marcello GIORGIO CAODURO
Colline NICHOLAS BROWNLEE
Schaunard KIHUN YOON
Benoît / Alcindoro  PHILIP COKORINOS
Parpignol  A. LIVINGSTON GEIS
Orchestra & Chorus Los Angeles Opera
Conductor Speranza Scappucci
Chorus Master Grant Gershon, Anne Tomlinson
Director Peter Kazaris
Stage Gerard Howland
Costumes Peter J.Hall
Light Duane Shuler
Choreograpy Peggy Hicks recreated by John Todd
Los Angeles, 5th June 2016
One of opera’s iconic moments, the tenor’s high C in the first act of La Bohème embodies not only a thrilling visceral accomplishment combined with beauty and emotion, but also encapsulates in one word the theme of the evening, boundless hope and young love:   la speranza. But in the Los Angeles Opera’s production of Puccini’s Parisian classic it was another Speranza who provide transcendence: conductor Speranza Scappucci. From the clean and well paced beginning chords to the heart rending orchestral play out after Mimí and youth have died, Scappucci led the LA Opera orchestra and her cast in a superbly structured performance of Puccini’s music drama. Never relying on false fortes for emotional impact she brought long dramatic phrases to their proper climaxes, bringing the listener in with a warm subtle Italianate sound which was articulated, lyrical and balanced. She got Mimì’s first act entrance just right, and the orchestral interlude before Mim´s final reawakening in Act IV was heartbreakingly beautiful. Scappucci kept the singing moving along briskly but modulated her orchestra and tempi to match their needs and abilities; a quiet and quick “Che gelida manina” for the light Guatemalan tenor Mario Chang, and a lusher and expansive “Sì, mi chiamano Mimì’ for Nino Machaidze. This is a soprano on the cusp of excellence in the full lyric repertoire.. Machaidze, who after early successes with Fille du Régiment and Roméo et Juliette is transitioning into roles such as Luisa Miller and Mimi, has a warm and present middle voice and is an affecting performer. Her upper register does not yet bloom or possess the richness of her middle. Her Italian pronunciation is occasionally quirky and one could wish for  more legato but this is potentially a major Mimí.   With the possible exception of Kihun Yoon’s Schaunard and certainly the much more experienced Philip Cokorinos as Alcindoro and Benoit, the other voices onstage did not carry well over the orchestra pit despite Maestra Scappucci’s control and pacing. Giorgio Caoduro’s Marcello was over rounded and contained, while Nicholas Brownlee as  Colline showed an attractive soft timbred sound, but did not use it to great effect in his Act IV’s “Vecchio zimara”. Janai Brugger as Musetta seemed more intent on proving she could sing Mimí than delivering Musetta’s brilliant waltz. While A. Livingston Geis’  Pargingnol was unexceptional the child chorister Rachel Knell gave a delightfully raucous line in the Cafe Momús scene. There is a voice there!   Revivals are always tricky, especially of a beloved 1993 production staged in Los Angeles by famed film director Herbert Ross. Director Peter Kazaris managed a clean well executed performance from his mostly young performers, with Machaidze and the experienced Cokorinos bringing the extra dimension of expressivity and life which animates the stage. The first rate chorus under the direction of Grant Gershon executed well but seemed to be going through the motions. Thus while the musical entrances in the early morning inn scene at the top of Act III were spot on they conveyed no feeling of early dawning and fading revelries so vividly portrayed by Puccini. Similarly most of the Cafe Momús scene was flawlessly performed without spirit. The same can be said about Peggy Hicks’ entertaining Act II choreography, as revived by John Todd. Architectural purist might object to Gerard Howland’s expansive rooftop garret and stairways in Acts I and IV, but cleverly employed scrims set several scenes intimately and the wide playing area made for a more cinematic La Bohéme. Costumes by Peter J. Hall and lighting by Duane Shuler were a bit somber overall, with an emphasis on blue green tints and brown scrims, but certainly attractive and cinematic. La Bohéme always lives from the exuberance of youth and the blossoming of young love set in the beauty and tragedy of Murget’s sexy snowy Paris, when all were young and believed love and art could soar above the banalities of everyday existence. In this performance transcendence came not with the tenor’s “speranza”, but from the orchestra pit and La  Speranza herself.