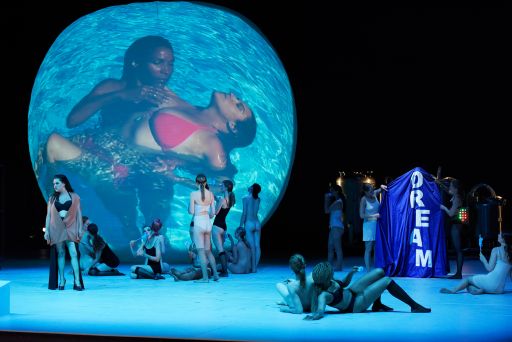 Deutsche Oper Berlin, Season 2015/2016
“DIE ENTFÜHRUNG AUS DEM SERAIL”
Opera Singspiel in three acts KV 384
Libretto after Christoph Friedrich Bretzner by Gottlieb Stephanie the Younger
Music by Wolfgang Amadeus Mozart
Bassa Selim, the Pasha ANNABELLE MANDENG
Belmonte, a Spanish nobleman MATTHEW NEWLIN
Konstanze, betrothed to Belmonte KATHRYN LEWEK
Blonde, Konstanze’s English maid SIOBHAN STAGG
Pedrillo, Belmonte’s servant JAMES KRYSHAK
Osmin, overseer for the Pasha TOBIAS KEHRER
Chorus soloists IRENE MAAS, KRISTINA HÄGER, JWA KYUM KIM, MAREK PICZ
Chor der Deutschen Oper Berlin
Orchester der Deutschen Oper Berlin
Conductor Nicholas Carter
Chorus William Spaulding
Production, stage Rodrigo García
Stage, video Ramon Diago
Costumes Hussein Chalayan
Light Carlos Marquerie
Berlin, 1st July 2016
I admit that the standard has been set high in Berlin at least since Calixto Bieito’s both famous and infamous production of “Die Entführung aus dem Serail” by Wolfgang Amadeus Mozart at the Komische Oper more than ten years ago but the last première of the season at the Deutsche Oper Berlin hits rock bottom with a new production of the opera. Director Rodrigo García and his team are said to have not appeared for curtain calls so that the audience of the first night could express neither agreement nor disapproval. Even though it was unlikely that any of the production team was present at the fifth performance, the dialogue before Konstanze’s G minor aria strongly incurred the audience’s displeasure. García did not only direct but also designed the stage along with Ramon Diago and he replaced most original dialogues of the German Singspiel by his own ones. The result is a mixture of English, German and French. García’s text has little to do with the action going on and consists of a lot of nonsense, silly punch-lines and mere obscenity, especially when the Bassa appears on stage as a smart-looking, hot-blooded woman doing some fitness workout whose lesbian desires naturally include Konstanze. Annabelle Mandeng as la Bassa who also works as a model and TV moderator presents the text that refers extensively to female intimate areas like a mix of a know-all schoolmaster and pretty cool serenity. García and Ramon’s stage is dominated by a big white balloon in the backdrop which serves as a screen for different, partly absurd video projections until it loses its air in the second part and shrinks on the floor. Fashion designer Hussein Chalayan created weird costumes that are hardly wearable such as Belmonte’s ridiculous chequered clown trousers and Konstanze’s fitness outfit looks a little daring. The videos by Ramon Diago are supposed to tell what happened before the start of the opera. During the ouverture we see Belmonte driving a monstrous truck with two flossies through cities and countryside, which ends up as a big dipper ride with one girl throwing up. We also learn that Konstanze, Blonde and Pedrillo were kidnapped by a UFO during a picnic in Berlin’s popular Tiergarten park. Belmonte’s first aria is illustrated by a threesome of him with the two girls while we see beating hearts behind the German word for “lie” during his Baumeisterarie. The big truck of the opening video shows up on stage with Belmonte and his female company and he drives it into the Seraglio at the end of the first scene. A considerable part of the production budget was probably spent on it. The Seraglio is a modern chemical factory where Belmonte and Pedrillo in yellow hazmat suits try to produce a new Crystal meth powder while the semi-nude or naked harem inmates are provided with the drug in the traditional form of candy floss. Konstanze is on a trip before Belmonte’s Baumeisterarie and Pedrillo makes Osmin high on it instead of the usual Cypriot wine. Konstanze covers La Bassa with a cloth bearing the words DRAMA-DREAM during the Marternarie while some other time the words are DESIRE-ERROR. With all his gags the producer fails to create any relationships between the actors coming to a head in the quartet scene that turns into an orgy with all available male and female extras of the harem offering different partner exchanges. The abduction from the Seraglio in the monstrous truck is prevented by a lot of special effects from ear-deafening explosions to dazzling spotlights. The reluctant Osmin eventually gets a black mask and earphones over his head and the final chorus is not the end of the opera. La Bassa has the last word saying that she is sure that either Konstanze will leave Belmonte for her at the next petrol station or all the four will return as there is no better place than her drug paradise. All that appears superfluous as Mozart had already composed everything in his music that will live forever while García’s production will certainly not. It is a good example for: not even the silliest production can kill Mozart’s music and the musical performance was fortunately on the usual high level of the opera house. Even though I do not consider Donald Runnicles who conducted the first night a specialist in Mozart, it is a pity that his assistant Nicholas Carter took over from him for the performance I attended. The Orchester der Deutschen Oper sounded little transparent and too anonymous, the ouverture did not show any musical accents, and altogether Carter’s conducting seemed undecided. I hope that will improve in future performances. Despite the physical exercises at the beginning Kathryn Lewek excels in the vocally most demanding part of Konstanze. She cautiously starts “Ach ich liebte” to get into her stride soon with clear and perfect staccati and trills. “Traurigkeit ward mir zum Lose” turned into a highlight of the first part after the sensitively sung recitative. She shows impeccable phrasing and dynamic pacing. The subsequent “Martern aller Arten”, the so-called Marternarie is another show-piece for her exquisite coloratura technique paired with an adequate dramatic impetus. Matthew Newlin sings Belmonte with his flexible lyrical tenor on a similarly high level. There are beautiful vocal moments in “Konstanze! dich wiederzusehen” and he masters the Baumeisterarie (“Ich baue ganz auf deine Stärke”) very well. He will certainly put the finishing touches to it in the future. Pedrillo is sung by James Kryshak whose tenor nearly has Belmonte quality. He tackles “Frisch zum Kampfe!” in the right heroic way with radiant top notes and the serenade “In Mohrenland gefangen war” with romantically spotted tones. There is no doubt that Siobhan Stagg is an aspiring young singer with a great deal of vocal talent. She sings a fresh Blonde and her voice possesses a distinctive timbre. Perhaps due to some stage fright the utmost top notes do not have the expected easy emission. Tobias Kehrer’s Osmin is professionally sung with all comic details and required notes but the bass has neither the black timbre nor the sonorous deep tones of Gottlob Frick or Joseph Greindl. I find him vocally more convincing in serious roles such as Orest. The admirable Chor der Deutschen Oper contributed to the Chorus of Janissaries with the four soloists Irene Maas, Kristina Häger, Jwa Kyum Kim and Marek Picz and the final chorus. PhotoThomas Aurin