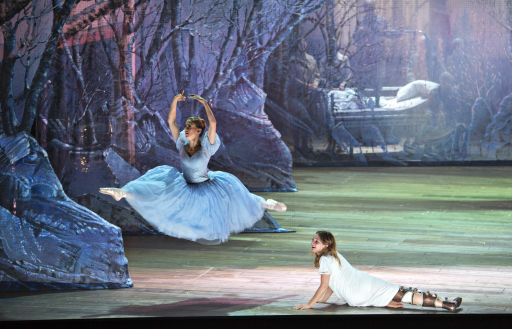 It is all about dreams. Fairy-tales may not be for children only. All of us dream from time to time and the famous Cinderella story is present in film, theatre and music. There are different versions of it depending on the time when they were created and the taste of the audience. In opera the most famous is certainly Rossini’s La Cenerentola which is focused on the comic elements in the tradition of Commedia dell’Arte. The French version Cendrillon by Jules Massenet is more than eighty years younger and emphasizes the romantic aspects of the Belle Époque. Despite some popularity in French and English speaking countries, the opera has been treated like Cinderella in Berlin by never staging it. Thanks to the Komische Oper the audience can now enjoy it here in a production by Damiano Michieletto who gives his debut as an opera director in Germany’s capital. Along with his stage designer Paolo Fantin he relocates the plot to a bald and shabby ballet school with cold neon lamps where the strict and aspiring Madame de la Haltière maltreats the dancers including her own two brashly impertinent daughters. It is the world of classical dance with a rat race for the leading position. This hard and merciless competition can even lead to an acid attack against a ballet director as happened at the Bolshoi Theatre Moscow a couple of years ago. For Lucette/Cendrillon the game is up after a stage accident. She is hospitalised, her leg in splints, a drip and a table with medicine next to her bed. So she can only dream about dancing again and of her Prince Charmant. Pandolfe, her father is degraded to the role of a kind of caretaker at the ballet school who complains about his suffering from the marriage with the dominating Madame de la Haltière and being unable to help his beloved daughter. Cendrillon’s step-sisters hope to take advantage of the situation and reckon that they have a good chance at the audition in front of the royal jury. The casting turns into an abundance of piercing and ironic slapsticks when the soloists of the Chor der Komischen Oper try classical ballet poses in blue tutus. The opera does not start with the music but the appearance of a careworn old woman played by Evelyn Gundlach with a handbag who produces two ballet shoes out of her trench coat. Is she the aged Lucette who remembers her youth? After mending the shoes with a few stitches she walks with a stoop across the scene to remain present most of the time. She blows golden glitter from her handbag over Cendrillon in decisive moments suggesting that she is part of the elves who accompany La Fée in similarly old grey coats (costumes by Klaus Bruns) and get Lucette a splendid ball dress from oodles of blue fabric and tulle enough to cover them all when a surgeon and a nurse are getting ready for an operation on Lucette’s leg which is prevented by the magic of the fairies. The ball with the audition where Lucette meets the Prince Charmant to become his favourite turns out to be a dream that ends up in the bleak hospital room. After an unsuccessful suicide attempt she finds herself in a magic forest with the prince. The scene becomes romantic with wings like in a classical ballet and the two singers are really accompanied by the dancers Ana Dordevic and Michael Ihnow to tell us the story of Lucette’s stage accident in a choreography by Sabine Franz. Things are happening at a breakneck pace at the end. The king rudely trips Lucette up so that she falls down and Pandolfe attacks the prince as he does not seem to agree with their relationship but the lovers unite and the prince fed up with his father’s pressure and false expectations, throws his ballet shoes away with the chorus dancers led by Madame de la Haltière starting to fight over them. If this happy end is also a dream of the hospitalised Lucette is left open by the production which allows even Madame de la Haltière to dream in a scene when she puts on Lucette’s ballet shoes to meet the king. Since the Komische Oper Berlin broke its tradition and started to produce operas in their original languages, the musical quality has increased by engaging internationally renowned singers. The first Cendrillon in Berlin is consequently sung in French on a high level. Nadja Mchantaf from the Semperoper Dresden who was trained as a dancer for ten years before she started to sing is ideal for the title role with her warm German soprano managing both beautiful intimate piani in the dreamy phrases up to perfect coloraturas passed over by La Fée and more powerful tones in the hospital scenes. She is going to join the company of the Komische Oper next season and I look forward to her roles to come. Massenet composed the Prince Charmant for a mezzo-soprano although the role is often sung by a tenor such as Nicolai Gedda in the studio recording alongside Frederica von Stade. The production recreates Massenet’s charming equilibrium between male and female voices by casting the Prince with Karolina Gumos. Her boyish androgyny as well as her Octavian-trained passionate mezzo fit into the role perfectly well. Werner van Mechelen is a convincing Pandolfe in rather unsophisticated clothes such as cardigan and braces whose baritone sounds beautiful and desperate in the opening scene as well as mature and sonorous in the lyrical duets with Lucette. Agnes Zwierko’s contralto possesses plush deep notes and is a luxurious cast for the eccentric Madame de la Haltière. Her daughters Noémie and Dorothée are adequately comic with Mirka Wagner and Zoe Kissa. Carsten Sabrowski as Le Roi uses his profound bass to bully his son Prince Charmant around. Caroline Wettergreen’s precise and effortless coloraturas of captivating beauty are a discovery in the role of La Fée. Needless to say that the chorus soloists get involved with the director’s ballet intentions and convince by delicate singing (chorus master Andrew Crooks). Henrik Nánási conducts the Orchester der Komischen Oper Berlin with French elegance and a fine feeling for Massenet’s multilayer score of esprit, irony and colourful impressionism. A great finale of the 2015/2016 season at the Komische Oper Berlin! Photo Monika Rittershaus