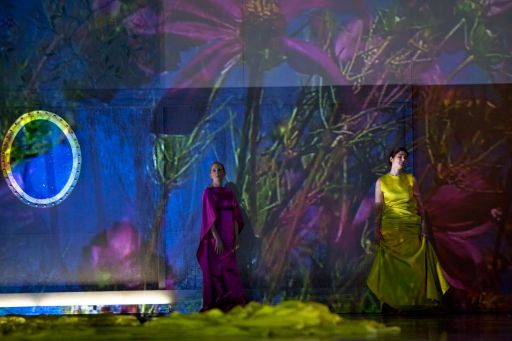 If there is an opera one might wonder how it continues after its end, it is probably Così fan tutte by Wolfgang Amadeus Mozart. Starting with a supposedly harmless bet between the two young soldiers Ferrando and Guglielmo and the wise and sly Don Alfonso who is sure of pursuing his own objectives, the action soon turns into a turmoil of feelings with every aspect of affection, jealousy, seduction, reluctance etc. The bet is about nothing less than proving the unfaithfulness of the soldiers’ fiancées and the set up partner exchange results in a happy end when the original couples find together again even though the pairings the other way round seem more suitable. So far so good for da Ponte’s libretto that is more than two hundred years old with the focus on the two sisters’ unfaithfulness. Today’s point of view may also involve the men whose action is more actively aimed at seducing their fiancées. The production by Robert Borgmann who is also in charge of the stage design and a well-known director of theatre plays who has directed an opera for the first time leaves the actors spread across the stage at the end baffled about what has happened and still in for realising the full consequences of their doing. In that respect I agree with his approach that nothing will be what it used to. Being a visual artist as well, he finds the right expression on stage by a yellow curtain finally coming down with the word YOUTH but unlike at the beginning, in the other way round suggesting that the audience is the mirror of the action and yes, the story is universal and might happen at all times. Doris Dörrie set the plot up in the flower power era of the 1970s in her highly acclaimed production at the Deutsche Staatsoper about fifteen years ago. It was also her first opera production but unlike Borgmann, she managed to create convincing characters on stage by synchronising the action and Mozart’s lively music. Borgmann may not have realised yet that time passes by in a different way in opera, especially when it is by a genius like Mozart who reflects the smallest emotion in the score that spans over no less than three hours. As a result of the flopped production by the Argentinian Rodrigo García of “Die Entführung aus dem Serail” at the end of last season, Borgmann might have been obliged to stick to the plot thus achieving both the acceptance by the audience and some innovation, which is nearly impossible. So he builds up the stage all around the action and leaves the singers to what they are there for: to sing an opera. He seems to try to tell another story with his pictures rather than to illustrate the plot and we often wonder what he is getting at. That does not hurt anyone but he seldom manages to synchronise story and music. The stage starts its own life instead with video projections by Lianne van de Laar: human faces, flower fields, wind wheels. The light by Carsten Rüger provides a basic dim atmosphere interrupted by dazzling neon or spot lights. Costume designer Michael Sontag contrasts rococo costumes with casual modern outfit. The two soldiers wear colourful fashion suits instead of uniforms and the dresses of the sisters could be out of any brand fashion shop. When I saw a crowd of men and women in rococo dresses with fans sitting on the forestage in front of the main curtain when I entered the auditorium, it crossed my mind for a moment that the director did not seem to have better ideas. That impression was underlined throughout the opera by the constantly revolving stage as if he wanted to make up for the missing Personenregie by additional movement to say ‘hey, something is going on’. Needless to say that it is all in Mozart’s music already, opera does have another timing. The stage has a black shining floor decorated with different things that give rise to lots of speculation: a bushy pine plant in the middle and a standing chandelier may still make sense but what about metre-tall mirror walls or a big dominating oil pump whose swinging movements are to correspond with the revolving stage? Towards the end the stage is dismantled anyway, the singers and chorus wear everyday clothes, the backdrop is taken away to show the dreary backstage area. Is it all a play? The falling yellow YOUTH curtain will take the audience back to everyday life and the story happens again and again every day. Is marriage not a reasonable companionship sometimes? A team of young singers seems to be a stroke of luck for the production. They are ambitious and partly excel in their roles. Despina is the motor of the action and exquisitely sung by Alexandra Hutton whose light soprano is vigorous enough not to sound like a soubrette. Both the black designer dress of the first act and the domina outfit and cocktail dress of the second fit her to a T. She even has a thoroughly comical appearance as a magnetising doctor with LED fingers. Noel Bouley is her male counterpart as Don Alfonso who is also dressed in black with yellow boots that go perfectly with the colour of the design cloth draped all around the pine bush. In Depina’s “Una donna a quindici anni” the production even suggests a sado-masochistic relationship between the two. He sings his part well without the usual vocal maturity but like some of the other singers, he stumbles through the Italian text. John Chest is a wholeheartedly singing Guglielmo whose attractive baritone reaches its limits in the presto phrases of “Donne mie, la fate a tanti”. A real surprise for me is the only idiomatic Paolo Fanale as Ferrando. He sings with a young radiant tenor boasting secure top notes and his “Un’aura amorosa” is certainly the musical highlight due to a stylistically exquisite interpretation that bears comparison with Peter Schreier or Fritz Wunderlich. Stefanie Lauricella’s Dorabella is full of beans. Her light and flexible mezzo is ideal for Dorabella’s zest for life and the only thing one could blame her for is that she almost sounds like her sister Fiordiligi who is sung by Nicole Car. A little disappointed by interrupted long phrases in the delicate duets with her sister in the first part, I found her “Come scoglio” adequately heroic and she was even growing in the tricky “Per pietà” although her breathing technique could be improved in general. The Chor der Deutschen Oper (chorus master Raymond Hughes) contributes to the high musical standard even though a little neglected by the production. It is due to Donald Runnicles’ ambition that the Deutsche Oper stages a new cycle of Mozart operas under his baton which started with the controversial “Entführung” last season. Whatever he creates with the Orchester der Deutschen Oper surprises at first sight. We know him as a free and easy fortissimo lover á la Wagner and here he rather concentrates on the low tones. The music sounds restrained but warm, which may be rather pleasant at the beginning but as a whole it will not even be half a Mozart. Often inaccurately played, some phrases pass by in the big theatre and result in a commonplace sound. Mozart’s music is full of fine, witty, ironic, even cynical subtleties, the preludes and interludes are sometimes a chamber opera themselves. All these musical accents and nuances can hardly be heard. Mozart’s colourful score must not be underrated or sold under value. Photo © Bernd Uhlig