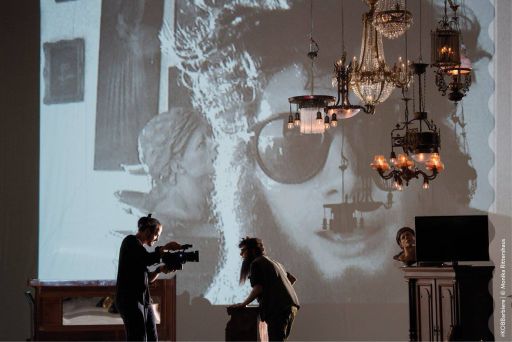 Komische Oper Berlin, Season 2016/2017
“IL BARBIERE DI SIVIGLIA”
Commedia in two acts. Libretto by Cesare Sterbini after the comedy by Pierre-Augustin Caron de Beaumarchais.
Music by Gioachino Rossini
Count Almaviva TANSEL AKZEVBEK
Bartolo, doctor and Rosina’s guardian PHILIPP MEIERHÖFER
Rosina, rich pupil in Bartolo’s house NICOLE CHEVALIER
Figaro, barber DOMINIK KÖNINGER
Basilio, Rosina’s music teacher TAREQ NAZMI
Berta, governess in Bartolo’s house JULIA GIEBEL
Fiorello, Almaviva’s servant DENIS MILO
An officer JASON STEIGERWALT
Chor der Komischen Oper Berlin
Orchester der Komischen Oper Berlin
Conductor Antonello Manacorda
Chorus David Cavelius
Production and stage Kirill Serebrennikov
Co-Stage Alexey Tregubov
Video Ilya Shagalov
Light Diego Leetz
Berlin, 9th October 2016
When the 23-year-old Gioachino Rossini composed his Il barbiere di Siviglia in about two weeks only, he was aware of the competition with other operas based on the same comedy by Beaumarchais but his work became one of the most popular operas ever that sees its 200th anniversary this year. So popular that the first première of the new season at the Komische Oper Berlin is a new production of Il barbiere even though the other two Berlin opera houses also have highly acclaimed productions of it in their repertoires. The one by Ruth Berghaus at the Deutsche Staatsoper has become the longest opera runner in Berlin since 1968 without losing its freshness. The Russian film and theatre director Kirill Serebrennikov is celebrated at festivals in Venice and Cannes as a specialist in drama rather than comedy. It is all the more surprising that he has staged the new barbiere at the Komische Oper. That is staged in the true sense of the word. He is in charge of the production as well as the stage and costumes. Alexey Tregubov helped him construct an empty white wall as a kind of screen for Facebook messages and Google searches. It opens up later to consist of two narrow segments with stairs inside which form the cramped world of Doctor Bartolo whose house looks like an antique shop with old furniture, lusters, paintings etc. Art market experts are alleged to say that these things can hardly be sold nowadays. Younger generations are not interested in them anymore. So Bartolo’s world is going down the drain: loveable but no future. Serebrennikov consequently transfers Beaumarchais’ plot to here and now and shows what young people like Rosina and Almaviva are into today. Smartphones and laptops dominate their everyday lives. They communicate through Facebook, emojis, uploaded music videos instead of letters, billets-doux, secret messages like at Beaumarchais’ time. The reasons why people flirt with each other are still the same but modern social media offer a good deal more possibilities of disguise, self-staging, self-optimisation up to digital calumny. What else is described in Basilio’s aria “La calunnia”? Serebrennikov admits that man is sometimes unfathomable and the human soul has a dark side. That results in a wedding of two young people who do not appear to be happy about it at all and who will probably run away from each other again soon despite all jewelry and luxury designer goods Almaviva has heaped on Rosina. Do they really know each other? The producer’s approach is right here. Today’s ways of communication bear a high potential of anonymity and estrangement and a loss of social empathy. But why does a girl of our time have to be afraid of a shot-gun wedding with her guardian? She is obviously not from a family of one of the Islamic refugees who are billeted on Bartolo instead of Spanish soldiers. They roll out their prayer rugs and enjoy TV programmes from a Middle-Eastern theatre of war. As a final touch, Rosina carries a poster reading “REFUGEES WELCOME!“ and quite a lot of odd-looking figures appear as if they were out of a mix of a crime thriller and “A midsummer night’s dream”. When heavily armed policemen show up after all, you should seriously wonder if you are not in front of your TV news at home. The production wants to outdo the story already full of punch-lines: Almaviva does not show up as a music teacher but the Austrian drag-queen Conchita Wurst, ditto Figaro to replace him at the harpsichord. The orchestra players in everyday clothes are seated at stage level for the Sinfonia interrupted by Fiorello checking the score for the remaining pages so that the conductor feels obliged to speed up the music. The orchestra is lowered after the Sinfonia to reappear on stage at the end with the players and conductor in formal outfit. A great idea! Serebrennikov’s costumes reach from casual wear such as a hoodie jacket for Almaviva, tracksuit trousers and a T-shirt for Rosina, an old-fashioned slipover for Bartolo to a Mephisto-like hipster outfit for Figaro. The young couple wears adequate wedding clothes finally whereas Berta is dressed in a fatsuit costume all the time – there is no accounting for taste! A no-no in opera so far, the production even interferes with the music when Fiorello sings with his mouth full or Almaviva turns his canzone “Se il mio nome saper voi bramate” into a blaring pop song after he started wrongly with “Una furtiva lagrima” from Donizetti’s “L’elisir d’amore”. Video artist Ilya Shagalov projects the chats of Rosina and Almaviva on the white wall as well as the video takes by Figaro of Almaviva’s cavatina and canzone at a speed, which makes it hard to follow them up. The potpourri of funny ideas, gags, optical surprises etc. rather than the lack of Personenregie requires that the musical performance keeps everything together. Antonello Manacorda is the very conductor to do so. The Artistic director of the Kammerakademie Potsdam and Chief conductor of the Dutch Het Gelders Orkest is experienced in Mozart and Rossini even though the start of the Sinfonia is a little slow and not lively and accentuated enough, which may be due to the interaction with Fiorello and Almaviva but he soon develops the gaggling, sparkling, sobbing and bustling sound typical of Rossini’s music, particularly in the great ensembles. For me it could have been a bit more ironic and cryptic the more so as Philipp Meierhöfer stands out as Bartolo. The production brings him into focus as not only the fool the others laugh at but also a tragic character. He does not have the final say but plays on a barrel-organ at the end of both acts. A touch of Fellini in opera! His warm and flexible baritone manages the insanely fast phrases of “A un dottor della mia sorte” strikingly well. Another plus is Denis Milo’s Fiorello. He is still a member of the Opernstudio der Komischen Oper and I hope they will soon bring the young baritone forward in this or other operas. I have seldom heard the hit “Una voce poco fa” in so half-hearted and unrefined a way. Obviously Nicole Chevalier cannot make up her mind if she sings the soprano or mezzo version of Rosina. The result is rather disappointing despite the fact that she sings a better “Contro un cor che accende amore” with the only acuto. Tansel Akzeybek uses his attractive tenor material for the Count Almaviva. Though brilliantly sung, he is overdoing the number of acuti that even me as an avowed top note fetishist would have been more impressed by more stylistic singing and less sloppy coloraturas. Tareq Nazmi sings the sinister music teacher Basilio with his young profound bass letting go a real “colpo di cannone”. I am sure Julia Giebel would be a veritable (soprano-)Rosina herself. Though hampered by the fatsuit she sings the devoted Berta instead with an appealing “Il vecchiotto cerca moglie”. Last but not least, Dominik Köninger with his attractive baritone and a Berlin-Neukölln male pigtail in the title role climbs down from the dress circle during his lively „Largo al factotum“ with almost tenor radiance at the end. The Chor der Komischen Oper under David Cavelius spreads as much brio as the Orchester der Komischen Oper Berlin, also thanks to Antonello Manacorda who leaves his visiting card for the vacancy of the General music director. Photos by Monika Rittershaus