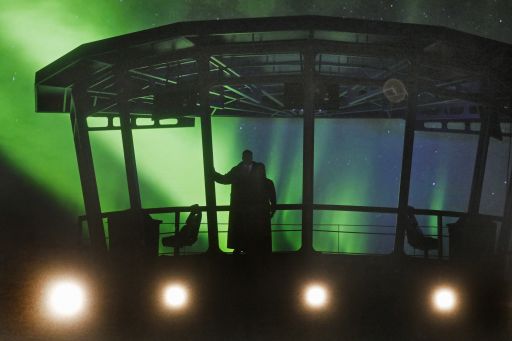 With no mad preamble of applause, the chandeliers rise, room darkens and Sir Simon Rattle in an aureole of white hair hops up on the podium and launches our ship of questing mutual passion. Are we enchanted by this score because we are drunk on its familiar allusions to the philosophical underpinnings of love, or because the Met orchestra plays it so exquisitely? Rattle leads the opera at rather a quicker and, at dramatic points, more abrupt pace than James Levine’s expansive vision of an underground ocean spreading out to the formless horizon. There are places that feel rushed or abrupt, almost shocking pauses for breath. We seem pushed not to linger, perhaps because the stage pictures do not urge us to linger.  Too, in this new production by Mariusz Treliński (shared with Baden-Baden, Warsaw and Beijing), the projections by Bartek Macias are constant and excessive in the modern style: As a reviewer, I did not want to close my eyes; as a Wagnerian, I would often have preferred to do so. The images sometimes enhance but often contradict the desire to submit, sink beneath the ever-renewing surge of the music. Do we need the sonar scope and the ship tossing in the waves through the Prelude? It is far too tiny a ship to be the one in which Tristan and Isolde sing their great Love-night duet, a set (by 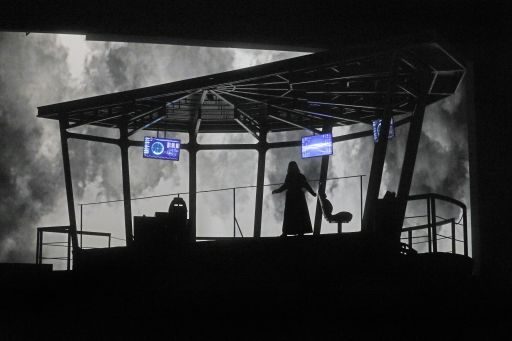 Boris Kudlička) which resembles the weapons depot of an aircraft carrier. Must all the colors be either black … or not so black? Isolde switches to a dark crimson gown after the duet, but that’s too late to make much difference. I liked the green Northern Lights during the “O sink hernieder” section, but instead of being inspired to stay above decks by this, the lovers headed downstairs to the armory for their atomic confrontation.  The Met’s new production of Tristan und Isolde derives its range of symbols from the light-and-dark, day-versus-night symbolism that infuses Wagner’s entire poem: the day is the realm where the lovers must adopt social ranks conferred by their society, and the night is the realm where they can live their truer feelings. This ur-myth lies at the base of so much of modern society and modern lore that the 1865 opera manages to feel a great deal more modern, more detached from romanticism and its frenzies, than it is. At the Met, certainly, there is no time for colorful romantic preoccupations.   There are touches of flame in the signal flares set off by the ship, the cigarettes chain-smoked by nervous Brangaene, a match carried about by a memory-hallucination of the childish, orphaned Tristan, who is 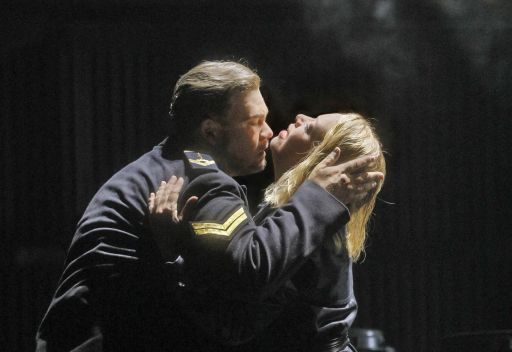 also visualized in projection as a tousle-haired waif a bit too securely embraced by King Mark in a white captain’s uniform. Monotonous black and white stormy seas are visible on screens or beyond windows. Lights glare into our eyes when the mood changes from internal yearning to external confrontation. Perhaps it is a matter of losing hope, but I was not offended by this production, as many were. It is endurable. And the cast is as good, perhaps, as the world can now present.  Stuart Skelton, a burly stage figure, has the power for this role and easy access to a broad range of colors: lyricism and bitter anger, taut sarcasm for his tense pre-potion shipboard duet, hysteria and remorse in his deathbed mania. It was a thrilling performance, with no hint of wearing out until Wagner required him to expire. There was much beauty in the lyricism, much ominous foreshadowing in the baritonal growls. A compleat Tristan (though slightly cut).  The Isolde of Nina Stemme, long-awaited in New York, is more difficult to admire uncritically. Her fruity, often beautiful soprano is perhaps a little small for the more overpowering orchestral moments in a house the size of the Met. As in Elektra last year, I felt she made more effect when the conductor held back, and that they were working together to allow her this freedom. Too, her breath control was not always on the mark and her pitch was frequently off it. She seemed to be working too hard to achieve effects that came more easily to other singers, and her high C’s, though pretty, were held in as if she was not quite sure she’d make them. She is not, of course, the first Isolde whose C’s have been outdone by her Brangaene. An accomplished actress, she inhabited the role’s many moods and temperamental leaps 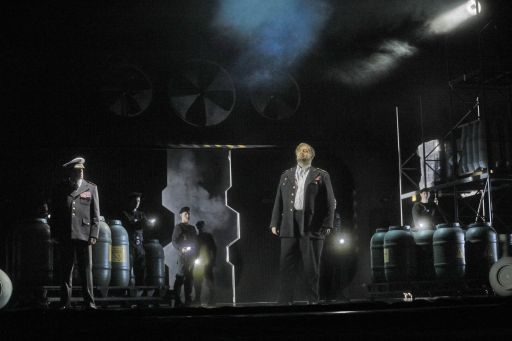 easily and completely, but vocally she was not among the best. Ekaterina Gubanova is one of the many Russian mezzos the Met has imported without having any clear idea how to use them. The obvious answer: put on more Russian operas, does not appeal to the management. Gruberova, possessed of a clear, sizable instrument, has been wasted on Donizetti and Offenbach; the best thing I’ve heard her do up till now, Clytemnestre in Gluck’s Iphigenie en Aulide, was performed in Rome. (The Met has never given this opera.) Brangaene at last makes proper use of her sizable voice and her acting skills. The character’s nebulous status in the show was exploited: she’s the best girl-buddy, lighting up a cig whenever she needs it. Why she is sent on a mission to fetch Tristan four stories away when Isolde could just pick up the phone can summon him is not clear. Yevgeny Nikitin sang and acted an able if less than sailor-like Kurwenal. René Pape sang his familiar King Marke, though it now takes him a minute or two to warm to the proper glow for his Act II narration. This is a long-awaited and very well-cast performance for Wagner-starved New Yorkers, and a presentation one that I shall return to during its debut run. Photo by Ken Howard©Metropolitan Opera