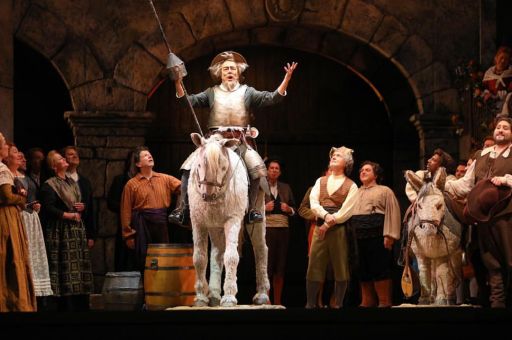 Lyric Opera of Chicago, Season 2016 / 2017
“DON QUICHOTTE”
Opera in five acts. Libretto by Henry Cain, after Jacques Le Lorrain’s stage adaptation of the novel by Miguel de Cervantes.
Music by Jules Massenet
Don Quichotte   FERRUCCIO FURLANETTO
Sancho   NICOLA ALAIMO
Dulcinée   CLEMENTINE MARGAINE
Pedro  DIANA NEWMAN
Garcias   LINDSAY METZGER
Rodriguez   JONATHAN JOHNSON
Juan   ALEX CARLSON
First Servant    TAKAOKI ONISHI
Second Servant   EMMETT O’HANLON
Bandit Chief    BRADLEY SMOAK
Bandits   WILLIAM COMBS, MATTHEW CARROLL, JOHN CONCEPCION,  RONALD WATKINS
Orchestra & Chorus of Lyric Opera of Chicago
Conductor Sir Andrew Davis
Chorus Master Michael Black
Director Matthew Ozawa
Set Designer Ralph Funicello
Costume Designer Missy West
Lighting  Chris Maravich
Choreographer August Tye
Chicago, 23 november 2016
Lyric Opera has scheduled performances of two French operas for these weeks, and the contrast looks deliberate: Berlioz’ Les Troyens is a blockbuster, a work that only the grandest companies can do justice to. LOC, in giving the piece its Chicago premiere, casually underlined local claims to the proper grandeur. Massenet’s Don Quichotte is a contrast in every way, an opéra-comique with few grand effects and a human level of drama. You will mark the contrast in the gait of company music director Sir Andrew Davis, who bounds onto the podium for Quichotte with a great grin for all the orchestra and all the house: He’s having fun! And LOC performs Massenet with elegance and panache. Don Quichotte is a diversion not a masterpiece. (Massenet called it a “heroic comedy,” and it was his last success.) There is no reason to perform it unless you have a star bass, heroic vocal glamour and adept at comic acting, who is looking for a proper star vehicle. Massenet created the title role for Chaliapin, and in Chicago in previous seasons it has been sung by Nicolai Ghiaurov and Samuel Ramey. That’s the level you want to aim for.
Ferruccio Furlanetto anchors the present revival in an attractive, realistic production borrowed from the San Diego Opera, which created it for him. He is rumored to be winding up his mighty career, but you’d never know it from the gratifying floods of perfectly produced sound with which he easily fills the Lyric Opera’s vast auditorium, the attention to detail, the touches of comedy and pathos he brings to this mightiest of character parts. All the varied touches of high comedy tinged with pathos are here: the yearning for Dulcinée, the crotchety swordsmanship, the religious fervor of his “martyrdom” by a gang of bandits who have stolen Dulcinée’s pearl necklace, the concluding death scene. It is a rare gift in the theater to have a comic role that ends in tragedy; audiences eat it up. Massenet, who accompanied Werther’s suicide with Christmas carols, recognized such a gift. Furlanetto’s outsize talent is adroitly partnered. Nicola Alaimo, best known for Rossini buffo roles, is just the right sort of Sancho, comic, practical and nobly devoted, and he sings French the way he sings Italian, with precision and good line. Clémentine Margaine, who gave a dazzling performance as Donizetti’s La Favorite at Caramoor last year, her American debut, sings Dulcinée with a smoldering near-contralto that gives me great expectations of her Carmen, Dalila, Charlotte and Didon, all roles she has sung in Europe. (She will sing Carmen at the Met this winter.) The Dulcinée of this version of the story bears slight resemblance to Cervantes’ naïve farmgirl; she is a small-town diva, bored with her many suitors, attracted by the sheer novelty of the elderly knight who idealizes her. The original creator of the role, Lucy Abell, insisted on accompanying her “Spanish” song on guitar, but Margaine needed no gimmick to strum our hearts. She struck the notes of high spirits and a yearning for something unknown, and she was affecting and powerful as the dying Quichotte’s ecstatic hallucination.  Director Matthew Ozawa, among much other cleverness, provided Dulcinée’s four suitors, Diana Newman, Lindsay Metzger, Jonathan Johnson and Alec Carlson, with distinctive gestures (arms crossed or pocketed or in prayer) so that we wouldn’t confuse them with the rest of the crowd, and Missy West was similarly distinctive with the costumes. Bass Bradley Smoak was threatening and magnanimous as the bandit who captures Quichotte and is impressed enough to set him free. Ralph Funicello’s sixteenth-century Spanish village might well pass for the real thing, and his runaway windmill, Quichotte trapped in one of its arms, was a proper treat. Photo Todd Rosenberg