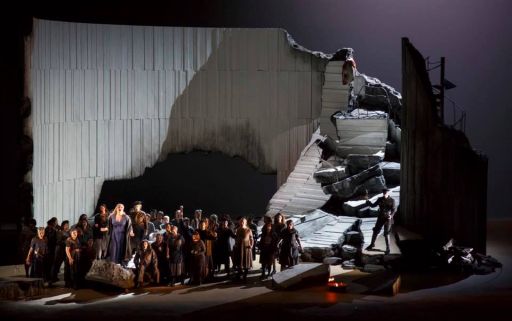 Turning narrative fiction into drama is a task full of pitfalls. One pitfall that Berlioz dug for himself in his masterpiece, Les Troyens, loosely based on the first books of Vergil’s Aeneid, lay in creating the prelude to Act IV, “The Royal Hunt and Storm,” an orchestral illustration of the poem’s discreet narrative of Aeneas and Dido out hunting, taking refuge from a storm in a convenient cave where … what occurs is not described. The orchestra seems to take care of all that.  But then grand opera sets in: a sequence of gala celebrations of the lovers’ military victory over a neighboring king. Ballets, songs, a supper party … and the gorgeous sequence of quintet and septet, climaxing with the lovers alone to consummate their union with a throbbing duet of pretty speeches drawn from Berlioz’ other favorite author, Shakespeare. If they have already become lovers in the cave, does that not rob the exquisite duet of its dramatic perfection? During the prelude we can ignore this awkwardness of story line, but nowadays directors stage any music intended to be played before the curtain. Tim Albery, at the Lyric Opera of Chicago, which is currently giving the opera its local premiere, has devised an alternative that violates none of the narrative and allows the psychology to evolve in proper sequence: At the first chords of the Royal Hunt, the curtain rises to show Didon asleep. Enter Enée, a bold intrusion into her dreams. Both singers leave the stage and are replaced by projected waterfalls and a nymphs-and-heroes ballet. It is clear that we are seeing Didon’s unquiet erotic dreams. The relationship has not been consummated, but everyone’s feelings being musically clear, we are set on a direct through the act to the Shakespearean rhapsody that concludes it so magically. In Chicago, Susan Graham, the go-to lady for the role of Didon these days, is in lush voice and her Enée is Brandon Jovanovich, taking it on for the first time with a dark, burnished sound, and the duet plays against a planetarium-like light show. Sir Andrew Davis, the company’s artistic director, leads the orchestra in a sweeping, delicately detailed account of the score, mercifully snipping a few of the many ballets and the comic scene of garrulous soldiers in the last act. What remains flows seamlessly, with all the rhythmic variety and balanced elegance of affect that were Berlioz’ specialty. The chorus, too, a major part (many major parts) in this opera, performed brilliantly.  The rather straightforward Albery production is played in modern dress (with modern weaponry) on Tobias Hoheisel’s turntable set, curved ramparts resembling a vast cement barrier, which calls today’s Middle East to mind. The ramparts are battered and ruinous from ten years’ warfare in La Prise de Troie, brand new if grim as the newly rising city of Les Troyens á Carthage. The inner wall provides a backdrop for projections, the waterfalls of Didon’s dreams and the starry night projections of the love duet. As it twirls about the stage, expertly and atmospherically lit by David Finn, ghosts of the dead or hallucinations of the living emerge unexpectedly around corners or down alleys. There is witty work with shadows, notably of the Trojan Horse rising ever larger to alarm Cassandre, and in this production it is the bloody Ghost of Hector, not the god Mercure as in Berlioz, who interrupts the love duet with the cry, “Italie! Italie!” to urge Enée towards his destiny. One might have liked more color in celebratory Carthage, but this is an intelligent and earnest effort. One of opera’s supreme achievements has been worthily presented. Christine Goerke declaims the falcon part of Cassandre with power and regal authority. The lower notes seem more congenial to her than the soprano ones, curiously enough, but her brooding despairs anchor the opening scenes of Act I and rise to superb heights in the scene of the temple suicides. Her Cassandre did not remind me so much of her demented Elektra as of her Iphigénie en Tauride many years ago, and Berlioz was a notable admirer of Gluck. Les Troyens a Carthage was to have introduced Sophie Koch’s Didon, but she withdrew and was replaced by Susan Graham, who has sung the role in New York, Paris and San Francisco. Her mezzo is of the proper size and beauty but a cool sound, with little emotional kick. Her performance was first rate, but she lacks the sensuality I treasured in Troyanos’s Didon or the searing anguish Lorraine Hunt Lieberman brought to the part. Too, I question whether Didon, however upset she might be at news of Enée’s departure, would threaten to slash him with a dagger while begging him to stay at her side. Enée was a role debut for the sturdy and ubiquitous Brandon Jovanovich, whose career moves from strength to strength. The voice is rather sturdy than spectacular, a solidly produced baritonal tenor, and he transposed the most extreme high notes. He does not seem reflective enough for his last-act meditation on duty versus inclination, but he creates a commandingly masculine stage figure for the many ensembles Enée is obliged to lead, and this exhausting role did not push him beyond his enviable strength. The entire enormous cast were ably chosen, aided perhaps by the director’s habit of pushing them front and center whenever they had to declaim. The tenors of Mingjie Lei (Iopas) and Jonathan Johnson (Hylas), though pretty, seemed a trifle light for the size of an enormous Lyric Opera House, but these roles are understood to be boys in the context of the story. Lucas Meachem made an ardent Chorèbe, Christian Van Horn a distinguished Narbal, and Bradley Smoak, bloody but unbowed, a powerful Ghost of Hector. Okka von der Damerau sang touchingly as Didon’s sister, Anna, and Annie Rosen’s Ascagne suggested a voice destined for greater things. Photo © Todd Rosenberg