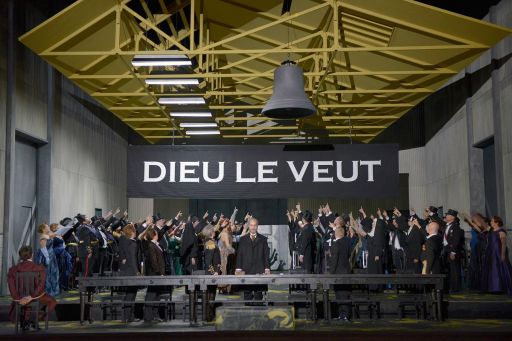 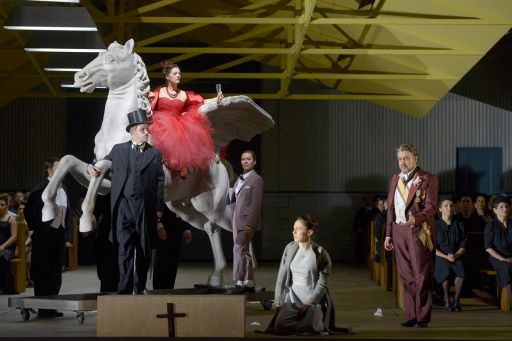 Les Huguenots by Giacomo Meyerbeer is the Grand Opéra par excellence! The composer’s most popular and spectacular work at least in Germany is now staged within a cycle of his operas which started with Dinorah and Vasco da Gama at the Deutsche Oper Berlin in the last two seasons. Meyerbeer who was born to a well-to-do Jewish family near Berlin in 1791 created his masterpiece based on one of the bloodiest chapters of French history: the Bartholomew’s Day Massacre in 1572. Despite the historical event, the storyline about the love between the Catholic Valentine and the Protestant Raoul was invented by Eugène Scribe and Émile Deschamps to get a sensational and melodramatic libretto out of it that along with Meyerbeer’s combination of German orchestra style and Italian vocal tradition, has what it takes to be an opulent Grand opéra which is a perfect mix that can be compared to an epic historical drama film of our time such as Ben Hur. Said to be the most popular opera of the 19th century it fell into oblivion in the 20th to be forbidden after all in Nazi Germany. We must appreciate the effort of the Deutsche Oper to revive Meyerbeer’s operas even though Les Huguenots was staged here about thirty years ago with a highly acclaimed production by John Dew in an abridged version in German featuring the young Richard Leech as Raoul and the unforgotten Pilar Lorengar as Valentine. This time the opera is in French and said to be complete. So it extends to more than five hours, two half-an-hour intervals included but the music is worth it. Meyerbeer’s vocal requirements are enormous and go beyond usual voice categories in most cases. For star tenor Juan Diego Flórez that is a win-win situation. Raoul de Nangis can be considered the most decisive role 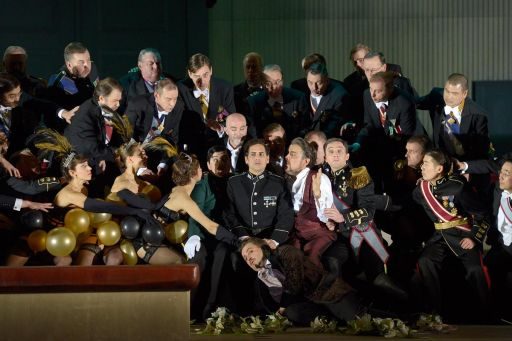 debut of his career so far. His substantially lyrical tenor has grown by a slightly metallic sound without losing its soft and flexible core which has made him the best Rossini singer of our time. His emission is effortless and he manages the many acuti with an ease that makes the extremely high tessitura totally forgotten. Raoul’s romance “Plus blanche que la blanche hermine” accompanied by Katharina Dargel’s Viola d’amore in act 1 turns into the first of many vocal highlights. I admit that his voice is a little drowned in the massacre scene at the end, which would not happen to a more heroic tenor such as Corelli but his excellent, delicate and stylistically perfect performance makes up for that short moment thoroughly. Patrizia Ciofi who sang Dinorah in concert two years ago tackles the Sutherland role of Marguerite de Valois with her experience in belcanto like Flórez. Her wiry soprano seems ideal for the part and she delivers a brilliant performance of the big opening scene of act 2 with virtuosic coloraturas, clear trills (a rarity nowadays!) and amazing top notes to find adequate lyrical moments in the duet with Raoul. As the setting reminds of a Mozartian comedy, she can also show some talent in funny moments. It is certainly an idea of the producer that she finally 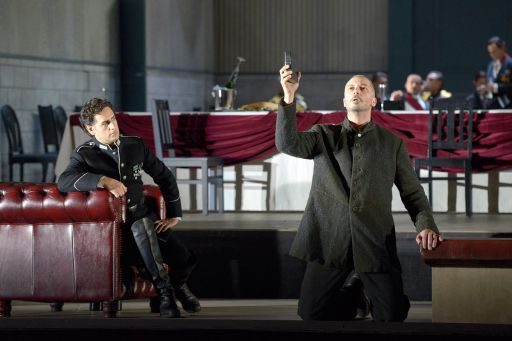 appears in a Lucia-like white dress with bloody spots like a death angel rather than referring to the central role in her belcanto repertoire. There is no doubt that Olesya Golovneva has another vocal background even though I believe to have heard her as the Queen of the Night at the Deutsche Staatsoper Berlin about ten years ago. The Russian soprano has started to take on more dramatic roles such as Raoul’s Catholic lover Valentine who converts to Protestantism in view of death. She may not have a Falcon soprano but she is absolutely convincing and meets all vocal requirements of the role. In the big duet of act 4 she reminds me a little of Martina Arroyo perhaps due to the fact that I know the recording under Richard Bonynge inside out. Her voice develops great radiance and she even spurs Flórez for a passionate love scene. Ante Jerkunica acts the part of Raoul’s loyal servant Marcel most affectingly up to the tragic end and sings magnificently in the best tradition of Slavonic basses. Irene Roberts is an outstanding page Urbain with excellent musicianship, perky wit and sparkling staccati in the scene with Marguerite. Talents like her seem to be found only at the Deutsche Oper these days. The Meyerbeer cycle is an ambitious project even for a big and powerful opera house but the Deutsche Oper again proves to 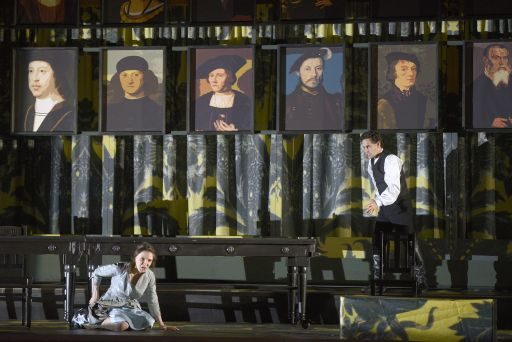 be up to it. The minor roles are also excellently cast such as the Comte de Nevers by the impressive and idiomatic Marc Barrard and the Comte de Saint-Bris, Valentine’s father by the sonorous and reliable Derek Welton. Bowled over by the Chor and Extra-Chor der Deutschen Oper Berlin (chorus master Raymond Hughes) it becomes quite clear that the chorus plays a major part in a Grand opéra. Some uncertainties at the beginning give way to a powerful homogeneous sound after all. Conductor Michele Mariotti is experienced in belcanto as well but does not seem to find the right approach to the opera by taking off its sweep somehow. He prefers cautious tempi and a finely tuned dynamic equilibrium. There are excellent solo parts in the orchestra and they play as if they had never played anything else before but fall short of the twinkle-toed ballet-like character of the opera which may be the reason why frequent ballet conductors such as Richard Bonynge excelled in it. Reserved applause and single boos for the production team coincide with my mixed feelings. David Alden from New York has succeeded in staging Britten’s Peter Grimes and Billy Budd at the Deutsche Oper so far. He talks in the programme about Meyerbeer as the “grandfather of the Broadway musical” but his production does not have anything spectacular. It drags on with conventional opera gestures emphasizing the tableau-like character of the five acts. The tableaus turn out taut and uninspired at first but contain more and more details such as the brutality of the religious conflict in the church scene of act 3 that leads to a kind of ballet with-blood stained rubber gloves and Ku Klux Klan hoods. Giles Cadle’s stage design of corrugated metal walls is dominated by a big wooden roof truss with the bell that rings in the massacre later when the roof is lowered not as a shelter for the Protestant victims but to prevent their escape. Papered walls or rococo lustres will descend for the party with Nevers or the scene at Marguerite’s palace that also features a bathtub raised from below the stage which is furnished with pews in act 3 to be toppled over later, huge white merry-go-round horses appear from time to time for Raoul and Marguerite to ride on horseback. Renaissance paintings decorate the house of Saint-Bris in act 4 and a big gate in the backdrop opens and closes for the chorus, horses or the final fray when the Catholics set fire to three crosses on top of the lowered roof. After all Alden finds adequate pictures for the action towards the end and tries to find them for the first two acts which are more easy-going supported by a mix of tasteful costumes by Constance Hoffman. Wait and see whether the production can survive in the long run. Photos by Bettina Stöß