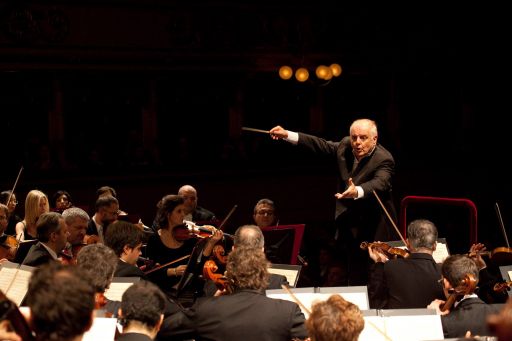 Milano, Teatro alla Scala, Filarmonica della Scala Concert Season 2016/17.
Orchestra Filarmonica della Scala
Conductor  Daniel Baremboim
Soloist  Marta Argerich
Ludwig van Beethoven: Piano Concerto in C major n.1 op.15
Anton Bruckner: Symphony N.7
Milan. 7th November 2016
A predictably highly charged and emotional evening at the inaugural concert of the Filarmonica della Scala’s 2016/17 season. The same sort of excitement that surrounds the opening of La Scala’s opera season each year on 7th December. The prestige that the Filarmonica have attained through their dedication to musical, cultural and social commitments in Milan was heightened in this case by the presence of two great artists as soloist and conductor whose extraordinary musical paths have entwined for almost 70 years from their shared childhood as friends and prodigies in Buenos Aires.
The atmosphere of expectation in the audience and the thunderous applause that broke out as Marta Argerich, after an absence of 22 years from La Scala, and Daniel Baremboim came on stage left no doubt as to the sense of occasion felt by the audience. Even as Argerich crossed the stage, her body language, her hesitant  steps, turning for a word with a violinist in the orchestra, and then fiddling with the piano stool until her entry, all betrayed her well-known sense of discomfort and unwillingness to play in public. Not Baremboim. A confident and determined step.  A calm, centred and compact demeanour.  A long-standing, close friend and perfect foil. A beautifully simple and balanced programme: the early romantic represented by Beethoven’s Piano Concerto n.1 and  Bruckner’s Symphony n.7, generally considered the last great romantic symphony.  The connecting Viennese and romantic period time-line was still to be completed by the Schubertian encore.
Argerich has always acknowledged Beethoven’s Piano Concerto n.1, which she played at her public debut aged 8, as a key work in her life. Her rendition is  ashamedly romantic although still capable of embracing and capturing the classical pianistic models of summary scales and arpeggios typical of Clementi and Hummel that burst forth in the first movement.  Baremboim’s comfortably paced introduction, played with the finest delicacy by the orchestra, was immediately taken in hand with decision by Argerich at her entry. From that moment, theirs was a constant interplay of musical exchange and discourse. The highlight was the second movement with the wide sweep of Argerich’s lyrical phrasing and the smoothness and sensitivity of the dialogue between the piano part and the wind section, particularly the clarinet. The pianist delineated the exquisite vocal line with loving warmth and  intimacy. The exhilarating rhythmic energy and vivacity  of the last movement, was driven by her strong characterisation and accented rhythms of the themes, alla turca, the folk dances, in the quantity and variety of  the humorous secondary episodes and in the scintillating virtuosistic passages. Even in the most technical passages her sound  always resulted round and smooth; never hard or metallic, demonstrating a carefully balanced and sensitive treatment of each note.
The much implored encore, Schubert’s rondo in A major for four hands,  was pure chamber music. Particularly moving the fact that this example of inspiration and heartfelt beauty was written five months before the composer’s death. With Baremboim playing on the audience side, we were invited to share the sheer pleasure of music making between two long term friends. Their complicity and mutual understanding, in their instinctive accommodation of each other.  Their grasp of the progression from the simple tender and effusive folk tune through its succession of ornaments and decorations, to its development through distant modulations until its final climax and a return to a much transformed first theme before its quiet close.
The  monumental 7th Symphony is the most famous and most performed symphony of Bruckner, and is considered his masterpiece. It contains the qualities most identified with his symphonic style, mysticism, sensuality, candour, doctrine, faith, and foreboding, in its most complete and balanced state. It fuses disparate worlds including the tortuous harmonic Wagnerian syntax, the ‘heavenly length’  attributed to Schubert’s symphonic work,  unsophisticated folk influences, the timbric grandeur of majestic organ liturgy and simple lyrical abandon. It contains the noble, moving and heart wrenching second movement written in honour of Wagner and famous for its extra musical associations; for Hitler’s admiration and as the soundtrack of Visconti’s film Senso. Baremboim’s gesture was secure and expansive, attentive to each individual entry or fragment, eliciting a depth of range of sonority and colour, and underlining the dramatic tension and  profound significance of every moment with unflagging concentration. The tempi were unrushed. Tremendously musical, incredibly expressive and dramatically compelling. However, despite moments of great intensity and beauty the performance did not seem to lift off. Some instrumental imprecision, a lack of cohesion of intent within the various sections and an impression of unfamiliarity with the work, flattened what had the potential to be an excellent performance.