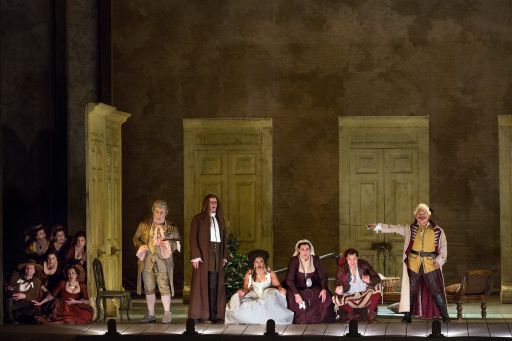 New York, Metropolitan Opera, Season 2016 /2017
“IL BARBIERE DI SIVIGLIA”
Opera in two acts.Libretto by Cesare Sterbini, based on the play by Pierre-Auguste Caron de Beaumarchais
Music by Gioachino Rossini
Count Almaviva  JAVIER CAMARENA
Doctor Bartolo  MAURIZIO MURARO
Rosina  PRETTY YENDE
Don Basilio  MIKHAIL PETRENKO
Figaro PETER MATTEI
Berta KAROLINA PILOU
Fiorello TYLER DUNCAN
Ambrogio ROB BESSERER
An Officer  MARK SCHOWALTER
Orchestra & Chorus Metropolitan Opera
Conductor Maurizio Benini
Director Bartlett Sher Revival Stage Director  Kathleen Smith Belcher
Stage Michael Yeargan
Costume designer Catherine Zuber
Lighting  Christopher Akerlind
New York, January 13, 2017
The Met revived its popular ten-year-old Bartlett Sher production of Il Barbiere di Siviglia in the first week of the new year with an imposing cast, most of whom, unfortunately, were suffering from winter colds. It is, perhaps, reassuring to learn, after seasons of doubtful wonder, that Peter Mattei is in fact human, that the easy verve with which he fills the enormous theater with superb sound actually costs him some effort and may not always be relied upon. His Figaro was working hard to bring off the legato and the humorous “falsetto” effects of “Largo al factotum,” and he did not comfortably hold his own in his duets with Javier Camarena’s charming Almaviva or Pretty Yende’s strong Rosina. There were phrases of wonderful Mattei sound but he spent most of the evening mugging through the comedy with a confidence for once belied by his vocal estate. It must have been one heck of a cold to congest that magnificent chest. But he was not to be defeated.
Camarena has announced that these four performances—Dmitry Korchak takes over on the twenty-first for the remainder of the run—will constitute his farewell to the role of Almaviva, which first brought him notice in Europe though he has never performed it before at the Met, where he debuted as Elvino in La Sonnambula. There were ornamental runs in “Ecco ridente” and “Cessa di più resistere” that were less than ideally smooth, but on the whole it was a graceful performance. Bellini and Donizetti are really more his style, and he will sing Arturo here next month.
Pretty Yende, a South African lyric coloratura, earned ovations for both the recit and the cabaletta to “Una voce poco fa.” The voice is silvery and agile but also strong, if anything stronger as it goes higher, and she has the bravura style for “Contro un cor.” This seems to set her future in the Semiramide or Armida direction rather than Adinas and Norinas.
Doctor Bartolo was Maurizio Muraro, a singer unknown to me. He is a precise farceur of imposing, ridiculous dignity, and he pronounces each word of “Un dottor della mia sorte.” One does not ask much more of a Bartolo, the object of everyone’s conspiracies, and many a perfectly adequate Bartolo gets by with little more. The surprise was Muraro’s sound, large and liquid and darkly colored, beautiful phrases pronouncing ridiculous sentiments. He is a lovely singer of this unbeloved role, and one hopes he will give us something serious one of these days. Mikhail Petrenko, comically tall and thin to Muraro’s rotundity and Camarena’s shortness, sang Don Basilio with low notes worthy of Meyerbeer or Moussorgsky, which adds to the fun.  Karolina Pilou, who has brought her sizable and plummy low mezzo to a number of small companies around town, made her Met debut as Berta. Though her sound easily filled the house, a cold rather cluttered the phrases of her aria del sorbetto.
Maurizio Benini kept the music at the sprightly pace it calls for. Sher’s production requires the scenery to wobble and the singers to shuffle and tap and double-take and mug, and all of them did so with tremendous gusto. An audience full, I gathered, of people unfamiliar with Barbiere responded with belly laughs of joyful surprise to the ancient jokes so skillfully pandered, with the sort of precision American audiences are used to on Broadway and on screens both large and small. Photo by Marty Sohl/Metropolitan Opera