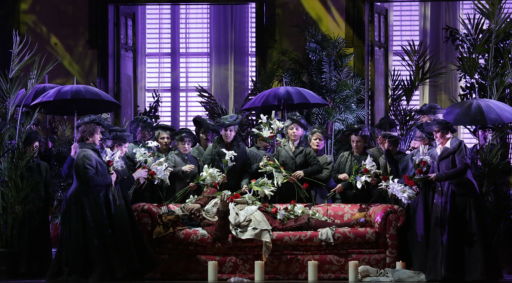 Milano. Teatro alla Scala. Stagione 2016/2017.
“FALSTAFF”
Opera in 3 acts. Libretto by Arrigo Boito
Music by Giuseppe Verdi
Falstaff  AMBROGIO MAESTRI
Ford  MASSIMO CAVALLETTI
Fenton   FRANCESCO DEMURO
Dr. Cajus   CARLO BOSI
Bardolph  FRANCESCO CASTORO
Pistol  GABRIELE SAGONA
Mrs Alice Ford  CARMEN GIANNATTASIO
Dame Quickly YVONNE NAEF
Nannetta  GIULIA SEMENZATO
Meg Page  ANNALISA STROPPA
Orchestra and Chorus of Teatro alla Scala.
Conductor  Zubin Mehta
Chorus Master Bruno Casoni
Director Damiano Michieletto
Stage Designer Paolo Fantin
Costumes  Carla Teti
Lighting  Alessandro Carletti
Video  Roland Horvath
A Salzburg Festival Production (2013)
Milano. 7th February 2017
The latest staging at La Scala Milan of Verdi’s Falstaff, which had its premier at La Scala in 1893, is that of the controversial and ingenious Italian director, Damiano Michieletto. The production first appeared at the Salzburg Festival in 2013 to great acclaim. As he so often does, Michieletto proposes a multiple plane reading. He sets the opera in a perfect replica of the parlour in Casa Verdi, the retirement home for aged musicians in Milan which Verdi built and considered his greatest work. There are intriguing connections between the composition of Falstaff and the retirement home which would seem to favour Michieletti’s vision. Both were created at the same time and in close proximity. Verdi’s librettist for Falstaff was Arrigo Boito and the architect for Casa Verdi was Arrigo’s brother Camillo. Falstaff was the eighty year old composer’s last opera and was based on the declining and decadent Shakespearean figure of Sir John Falstaff. The idea of linking all these connections, especially at La Scala, is certainly tantalizing. Before the curtain rises a film  of the piazza and the present day Casa Verdi is rolling. The curtain rises to what is to be the only set of the evening, the salon of Casa Verdi where strains of Verdi’s best known themes are heard on the piano. Two parallel threads of the narrative take shape; the performance of the opera Falstaff exists only as a figment of the crepuscular dream world of the old baritone.  When the opera begins the staff at the home can’t wake the aged baritone who is napping. He and the residents are dressed in modern clothes, the characters from the opera in late 18th century costumes. The opera characters appear and disappear through a trap door behind the divan or through the swinging glass doors which lead off to the the dining area.  Their comings and goings mingle with those of the residents. But just as dreams  are inconsistent, interrupted and contaminated, so in the end is the Falstaff story line, a victim of its own duplicity. Adding to the dispersiveness,  an enormous leap of faith and suspension of belief is required to accept the rough and rowdy behaviour of rogues in an Elizabethan inn with their transposition, to the decorous and genteel haven of Casa Verdi. The oneiric atmosphere syphons off the raw energy of the bawdy original. The exhilarating moments of the climax at the end of act two, where Falstaff is hidden in the washing basket and emptied into the Thames disappear into a rather tame and contrived scene consisting of  the parlour covered with an enormous sheet and a final explosive splash of blue confetti.  The strawberry feeding of the nurses recalling the film Nine and a Half Weeks is a concession to popular culture. The parlour ‘come palm court’ in the third act enfeebles the mysterious and magical wood of Windsor, as do the mock funeral and seductive fairies. The overall effect in the end, notwithstanding the clever combination, is that the impetus of the comedy is dissipated and the spirit of the original work is lost.
Despite these reservations, Ambrogio Maestri‘s characterisation was masterful. He dominated the performance in every sense; physically, vocally and dramatically. He was relaxed and spontaneous, sardonic, wry and smug, but never exaggerated or emphatic. His timing was perfect and  his very presence on stage was enough to galvanize attention.   He doesn’t play Falstaff.  He is Falstaff and his effortless personification betrayed his absolute command of the role and his 250 performances of it. His ability to colour and accent the vocal line, to whisper, to float and to boom were exemplary. He harnessed his power with admirable control.   Carmen Giannattasio‘s  Alice was spirited and lively. Her luscious timbre gave warmth and style to her character. In fact the four female voices, Gianattasio, Giulia Semenzato as Nanette, Yvonne Naef as Quickly and Annalisa Stroppa as Meg were perfectly matched vocally and the flawless execution of their ensembles was of rare timbric beauty  and clarity. Of particular note, Giulia Semenzato’s ´Bocca Baciata’ and ‘Sul fil d’un soffio estesio ‘ were rendered with shimmering vibrancy and ethereal finesse.  Massimo Cavalletti‘s was an expressive though self-controlled Ford within the constraints of his overlapping role between present and past. Francesco Demuro‘s Fenton was both strong and delicate, coupling a well defined diction with  his smooth and sustained legato. Carlo Bosi was a fine blustering, indignant and duped Dr Cajus. Francesco Castoro and Gabriele Sagona as Bardolph and Pistol were a strong and entertaining support to the main story line throughout the evening. The chorus directed by Bruno Casoni was impeccabile. The scenery by Paolo Fantin, costumes by Carla Teti, lighting Alessandro Carletti and video by Roland Horvath were all fundamental in creating the convincing authenticity of Casa Verdi and its residents and the flights of fancy of Michieletto’s old trouper/Falstaff.
Zubin Mehta‘s musical direction was refined and discreet. His tempi, calm. His gesture, frugal and controlled. The orchestra, light and transparent remained  in perfect equilibrium with the stage, their articulation crisp and precise. The finale fugue, ‘Tutto nel mondo è burla’, was stylishly and impressively constructed.  Every vocal entry was given brief prominence before receding abruptly to allow the following voice to emerge in a play of subtle nuances where every thread was clearly etched. In fact all the ensembles were exquisitely assembled, honouring Verdi’s masterpieces of concerted writing.