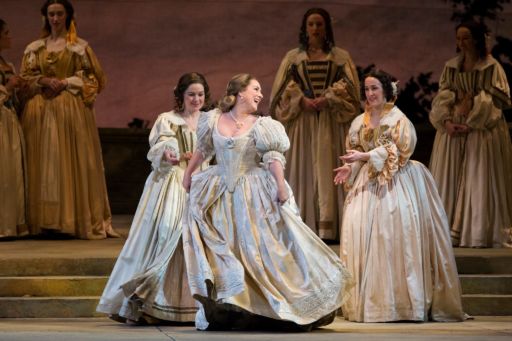 New York, Metropolitan Opera, Season 2016/2017
“I PURITANI”
Opera in three acts, libretto by Carlo Pepoli
Music by Vincenzo Bellini
Lord Walton  DAVID CRAWFORD
Sir Giorgio Walton  LUCA PISARONI
Elvira Walton  DIANA DAMRAU (Feb. 10) / PRETTY YENDE (Feb. 14)
Lord Arturo Talbot  JAVIER CAMARENA
Sir Riccardo Forth  ALEXEY MARKOV
Sir Bruno Robertson  EDUARDO VALDES
Queen Enrichetta  VIRGINIE VERREZ
Orchestra & Chorus Metropolitan Opera
Conductor  Sarah Ina Meyers
Chorus Daniel Palumbo
Director Sandro Sequi
Stage Ming Cho Lee
Costume designer Peter J.Hall
Lighting  Gil Wechsler
New York, February 10 and 14, 2017
I Puritani is pure joy and pure froth. To experience the opera is to stand amidst a mountain stream, the chilly spume from all sides knocking you about so you can barely keep your feet. But Bellini’s white water is melody, erupting at you from all directions, battling you down the rocky channel of the preposterous plot, mad scene by mad scene. Give it a strong cast and the show is irresistible. A friend of mine took eighteen of his students, college freshmen, to the Met’s Puritani last Friday, a first operatic exposure for most of them. They were in bliss by the conclusion of the experience: Yes, this is good old- fashioned opera! The real stuff, unwatered by modern standards. Come, be intoxicated, drown in it! The Sandro Sequi production on Ming Cho Lee’s sets, now forty years old, designed for the thespian skill of Sutherland and Pavarotti at their peak sags a little, but the great staircases (Sutherland loved staircases; Ming Cho Lee was famous for them) are spacious and the washes of the concluding horizon are as brilliant as watered endpapers. At the first run of performances, back in ’76, nobody cared about their acting! What singing that was, from a quartet that included Sherrill Milnes and James Morris! Today, it’s, well, old-fashioned: Enormous choral forces with more costume than personality trudge on and trudge off, expressing joy, shock, regret. The ancient lighting, with storm effects in Act III, does not cheer.
The star performer in the present revival, giving a highly satisfying performance in an awkward part, was Javier Camarena. He has lost, perhaps, a touch of the velvet that provided a delectable sleeve to his exquisite sound when he sang Elvino and Ramiro a couple of years ago, but he gave a ringing, passionate performance, the long lines floating irresistibly, rising to a thrilling high E in “A te o cara.” In the last act, he sang the three verses of his serenade differenced by an intricate brocade of highly musical ornament. In “Credeasi o misera,” he omitted the F in alt on which so many singers come to grief (in recent seasons here only Lawrence Brownlee has attempted it, sometimes impressively). At least one member of the upstairs audience was rude enough to point out the lacuna: “No high F!” he cried, as the gratifying applause died down. The rest of us were far too happy to have this ardent and tasteful bel canto artist among us. You don’t need that F for a great Puritani. Pavarotti and Kraus never sang one in the house.
Diana Damrau’s Elvira bounced about the stage, her hairstyle and rambunctious persona recalling Olivia da Havilland in her juvenile costume pictures. Her madness was expressed in puzzlement and an incomprehension of boundaries; when, in Act III, she beheld the long-vanished Arturo, she passed him by with a shrug as if to say, “Another hallucination; oh well.” But if her acting was winsome, her vocalism showed sad signs of fray. True, she had been ill during the rehearsals and did not sing the Dress Rehearsal, but even allowing for that, her Elvira was not top drawer. Brilliant phrases rose to shrill or insubstantial tops, and “Qui la voce” was pitchy throughout its length. Coloratura, which must be brilliant in this role above nearly all others, was rather a let-down until the final cabaletta, for which seemed to have been holding herself in readiness.
For the second performance, on Valentine’s Day, Damrau admitted defeat. Pretty Yende, who had been singing a run of Barbiere di Siviglia, had lingered in town against just such a contingency (she is down for a run of Juliettes), as it chanced, had sung Elvira in Zurich last June, and was easily able to brush up her fioritura. She came, sang and conquered.  Heaven only knows what the Zurich production of Puritani was like, but Yende’s interpretation was very different from Damrau’s. Instead of giddy canary whirling about the Walton mansion, Yende was a more troubled and troubling presence. At the end of Act I, she sat on the floor fiddling with a discarded bouquet of white roses, and she spent Act II toying with a wedding veil—whose? it can’t be the one the Queen (Virginie Verrez, a slim, stately woman with the loudest voice in the cast) eloped with in the previous scene.
Yende’s bel canto chops were never in doubt. She ornamented wherever she could, in “Son vergin vezzosa,” in “Vien diletto e in ciel,” in the final cabaletta, where she sang Sutherland’s variant with considerable credit. More impressive than that, she sang with a lusciousness to the overall tone that recalled Mariella Devia and contrasted with Damrau’s rather metallic sound. More impressive even than that, her pitch was absolutely true throughout “Qui la voce,” where Damrau had sung flat. There were some insane high notes—was that an F at the end of Act I? I had thought, during the Barbiere, that Yende did her best singing in the Lesson Scene, where she is out of Rosina’s character in an aria di bravura. Her Elvira justified my feeling that she is potentially a great dramatic coloratura. If anything, the vocal lacework was a bit excessive, though on such an occasion (last minute substitute in a part no one’s heard you sing) and in such an opera as Puritani, this is of no importance. For a more dramatic role, one would hope for less ornament and more dramatic point to it. For Elvira’s mad scenes—well, the dramatic point is the singing. Yende’s voice seemed a bit small in Act I, and she came down to the footlights to go mad, but she seemed to gain strength in Act II, easily matching the other singers. She and Javier Camarena, such happy partners in Barbiere, seemed truly to enjoy each other’s company, matching phrase for phrase in “A te o cara” and the great Act III duet. That gave us half a Puritani Quartet.
Alexey Markov, a stalwart singer, the Riccardo, sang a foursquare, ringing double aria in the opening scene but seemed to have a run of dry throat in Act II, choking on several lines. Luca Pisaroni, a suave and justly admired Mozartean, was out of his depth in the patriotic trumpetry of  “Suoni la tromba.” The great martial duet, which should bring down the house, went for naught. Maurizio Benini, who conducts all the Met’s bel canto revivals if no one more interesting claims them and does so with a basic competence, had some moments of imperfect interaction with the singers, but his rhythms were clear enough to permit them to interact among themselves rather than staring at him, and the opera’s brilliant bubbling tunes won many new and old friends. For Yende’s scenes, he was careful to be highly supportive—their sessions over a piano must have been interesting—and if there was an instant or two of mis-cue, it hardly mattered on such a splendid occasion. Photo  Marty Sohl/Metropolitan Opera