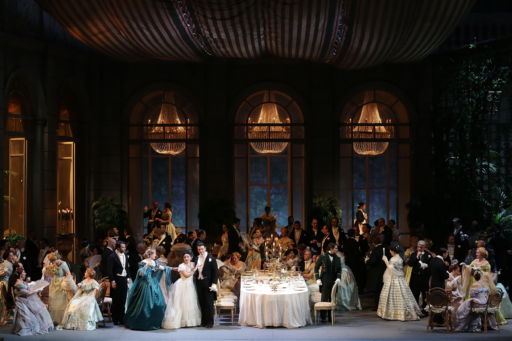 Milano, Teatro alla Scala, Opera and Ballet Season 2016/2017
“LA TRAVIATA”
Opera in 3 acts. Libretto by Francesco Maria Piave
Composer Giuseppe Verdi
Violetta Valéry AILYN PÉREZ
Flora Bervoix   CHIARA ISOTTON
Annina CHIARA TIROTTA*
Alfredo IVAN MAGRÌ
Giorgio Germont LEO NUCCI
Gastone,Viscount de Letorières  ORESTE COSIMO*
Baron Douphol,Violetta’ protector  COSTANTINO FINUCCI
Marquis d’Obigny,Flora’s protector   ABRAMO ROSALEN
Doctor Grenville  ALESSANDRO SPINA
Giuseppe,a servant  JÉRÉMIE SCHÜTZ*
Flora’s servant/Violetta’s valet  GUSTAVO CASTILLO*
*Soloists from La Scala’s ‘Accademia di Perfezionamento per Cantanti Lirici’
The La Scala Orchestra, Chorus and  Ballet
Conductor Nello Santi
Chorus Master Bruno Casoni
Director  Liliana Cavani
Stage designer Dante Ferretti
Costumes  Gabriella Pescucci
Choreography  Micha van Hoecke
Milan, 5th March 2017.
A rapturous reception for the second of six sold-out, non-subscription performances of the La Traviata revival at a La Scala Theatre filled to the rafters.  Even without the drawcard of the international star Anna Netrebko, who will sing the last three, and with the substitution of the indisposed scheduled tenor Francesco Meli, there was a palpable air of expectancy and sense of occasion in the noticeably cosmopolitan audience.
The historical 1990 production directed by Liliana Cavani with scenes and costumes of spectacular impact by  two celebrated Oscar winners and multiple nominees, Dante Ferretti and Gabriella Pescucci is at its eleventh seasonal revival.  The lavish sets and costumes are as sumptuous as can be expected but not overladen with detail or clutter. The opulence of the winter garden setting in the first act, the refined casual luxury of the country retreat and  the ‘gattopardesque’ palace of the second and the bare but distinguished bed chamber of the third were stunning. The auxiliary of subtle and naturalistic lighting was the engaging factor.  The first act reception sparkled with the brightness of candid colours, iridescent fabrics and shimmering lights of carefreeness, the country scene was suffused with soft, serene hues and elegant but relaxed country style in contrast to the decadence and darkness suggested by the plum colours predominant at Flora’s. In this scene Violetta’s blood red gown clashed strikingly and pointedly with the overall colour scheme. Independently beautiful and splendid in their own right, combined with the naturalistic and fluid staging of the cast and chorus, they production provided a valuable and refined support to the effectiveness of both music and libretto.
The young Mexican/American soprano Ailyn Pérez was a generous Violetta. Vocally assured, her   beautiful round timbre is sustained by a well-placed voice and solid technique. Her ‘mezza voce’ was exquisite and she syncronized beautifully with the conductor in her display of contrasting dynamics supported with enviable control. Greater emphasis could have been given to the development of her character’s role.  Accomplice the relatively slow tempi, the lightness and frivolity of the initial Violetta and her gradual conviction to commitment, underlined by her conflicting emotions in her first act aria ‘Ah, forse lui’, were not evident vocally or theatrically. She was composed and self-aware from the beginning.  Not a natural coloratura she was at her most compelling in the fervently lyrical moments. Her second and third acts were movingly sung with sensitivity and depth.
The young tenor Ivan Magrì, substituting Francesco Meli, threw himself into the role passionately. After a first act were he was more often than not misaligned with the conductor(perhaps due to unfamiliar tempi), but from the second act the problem disappeared and he sang and acted convincingly with exuberance and intensity, prodigal with appropriate accents and abandon.  Leo Nucci, a seasoned Germont, at 75 was in fine form, his voice firm and strong, the weight and incisiveness of his words authoritative and his presence and stagecraft relaxed but commanding. Chiara Isotton was perfectly at ease as Flora and Chiara Tirotta was an accurate and attentive Annina. The roles of Gastone, the Baron, the Marquis and the doctor, respectively Oreste Cosimo, Costantino Finucci, Abramo Roselen, and Alessandro Spina were convincing and well defined musically, vocally and theatrically. Jérémie Schütz as Giuseppe and Gustavo Castillo as valet and servant completed a competent cast. The chorus gave a polished performance. The choreography of the gypsies and matadors in act ll though, was not appealing or convincing.
Without wishing to minimise the importance of the sets and staging or the charismatic cast, the undisputed protagonist of the performance, however, was the doyen of Italian opera conductors, the 86 year old Nello Santi who despite a long,  illustrious, international career has only conducted one production at La Scala dating back to 1971. Appreciative and thunderous applause and cheering met his every entry.  The singers acknowledged him with deference and reverence at the curtain calls. His step may have been unsteady but his gesture was firm, his direction determined and his reactions immediate. He was the fulcrum of the evening who exercised a complete dominion over the performance and on whom all eyes were fixed. The outline of his interpretation was clear from the opening four bar violin phrase of the Preludio, which presciently anticipated the melancholic orchestral introduction to the fateful last act. The violins responded with a fine spun pianissimo followed by a suspended and what seemed interminable two beat rest. Subsequently soft sighing phrases, pauses, the coaxing out of the counterpart harmonies and purposeful dynamic colourings created a sense of discovery and suspension.  The rest of the prelude, a repetition of the ‘Amami Alfredo’ theme, was performed with the expressive poignancy of a sorrowful prophesy linking it to the passionate and emotional intensity of the moment as it would later occur in the opera. Throughout the performance the tempi were unhurried, the musical line sculptured and the orchestral colours and passages highlighted on an equal musical footing with the stage. The orchestra shone for homogeneity of sound, balance, ensemble and commitment. The evening was anything but a routine performance of a popular piece of repertory.  The final curtain calls were a triumph for all.