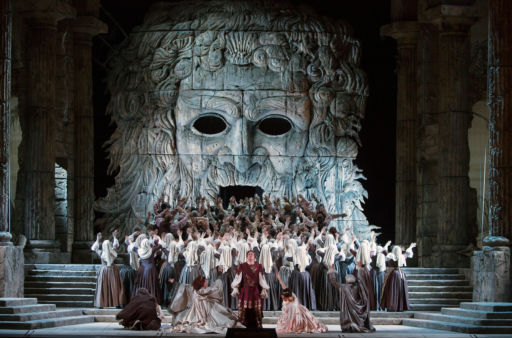 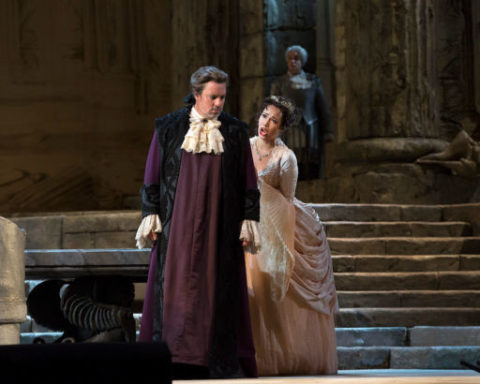 Idomeneo was still at the fringes of the repertory in 1982, when the Met introduced Jean-Pierre Ponnelle’s production, one of the “Roman ruins theme” devices he created around the world for many of Mozart’s opere serie. (The Met also got his Clemenza di Tito. I saw his Lucio Silla in Vienna.) The opera was not quite new to New York, back then, having had concert performances and a disastrous staging by the New York City Opera on a set resembling the Minoan palace at Phaistos. But with the Met—where it starred Pavarotti, von Stade, Cotrubas and Behrens and was conducted by James Levine—the opera joined the local big leagues. The contraption still exists and returned to the house, Levine still in charge, last Monday night. The music-making at the premiere was not all top grade, but should improve during the run.
Ponnelle well understood this revolutionary score. Nettuno’s enormous visage, mouth agape for victims, looms at the rear of the stage, its closed eyes open when (for two sentences) he speaks and solves the dilemma of the plot. The stage movement has a processional feel that suits the grandeur of the score, a formality building to the sacrificial rites at the opera’s climax. The chorus, whose role here is all but unprecedented in grand opera, long the preserve of solo singers, celebrates the union of warring peoples, illustrates the tempest in Act I with despairing cries for help and the balmy weather of the leavetaking in Act II—an idyllic scene abruptly destroyed by orchestra and chorus, as (we are told) a sea monster erupts from the deeps. (Ponnelle has the sails fall before the wind, while behind them we see again the furious head of Nettuno.) This full and active role for the chorus, which Mozart developed upon what he had learned from Gluck, is one thing that makes Idomeneo significant as well as beautiful: Nineteenth-century grand opera blossoms here, and in Zauberflöte and Fidelio in succession. Idomeneo is not merely very lovely, it is important!
Most of Ponnelle’s ideas have been retained by David Kneuss, stage director of this revival, but Levine has not been able to find singers of quite the star billing of the past to sing it. (In previous revivals, Placido Domingo, Ben Heppner and—best of all—David Rendall have succeeded Pavarotti in the title role here.) Matthew Polenzani, an experienced Mozartean who has given us marvelous Ferrandos and Belmontes and Taminos, was deemed to have grown in vocal stature sufficiently to take it on. He managed it agreeably but the smoothness of his voice in lighter roles has faded with time, and some of the divisions of “Fuor del mar” were (appropriately?) heavy weather. He sang the more elaborate, original version of the aria, but he did not blaze easily through it. Perhaps by later performances he will have found the key to it. Meanwhile, these less-well-known names mean the house was not crowded at the premiere and, as the long evening drew on, many seats were vacated by those unfamiliar with the glories of the later scenes.
Alice Coote, the Idamante, a more than effective Handelian and Rosenkavalier, had a very awkward opening night. Not until Act III when (aside from the quartet) Idamante has little to do, did she sound in charge of her assignment for pitch and breath. I hope this is some temporary ailment. Nadine Sierra, the Ilia, scored a proper triumph, filling the house with her easy, soaring lyric soprano and ornamenting “Zeffiretti lusinghieri” prettily.
Ponnelle’s costumes are simple, white and brown and beige, and the only eighteenth-century touch is the 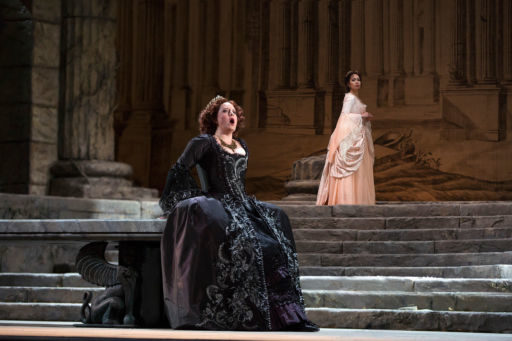 periwig on the royal counselor, Arbace—except for Elettra, in a black, silver-spangled court gown complete with panniers, topped with a curly red fright wig. She seems to have invaded Crete from foreign parts or some other opera, which is precisely the role as Mozart has composed it. Elettra is an intrusion, unhappy when other characters are happy, happy when they are sad, insane when the rest rejoice in a lieto final. The other roles are baroque clichés: tormented king and father, loyal, heroic son, disinherited princess, devoted counselor. But Elettra, driven mad by her passions, is something almost new and Mozart (though he cut the mad scene at the premiere) is experimenting again.
Nothing can quite efface my recollection of Hildegard Behrens in this role: Demented was the only word. Behrens’s voice was always unpleasant in lyric Italian music, but Elettra’s evil temper suited her very well. Only in “Idol mio,” Elettra’s aria of languid love, was her timbre actively at war with Mozart, and her mad scene made us fearful for her survival, her body heaving with emotions almost too desperate to be sung. Carol Vaness, who succeeded her and was far more suited to the music (as she was to all Mozart soprano leads), could only imitate Behrens’s physicality. Elza van den Heever has a very pretty voice and an outsize stage personality. Her technique is clear and appealing—as was not obvious when she sang the arch, fist-pounding Elisabetta in Maria Stuarda. Her acting was choreographed, each line of music accompanied by a gesture of sweeping artificiality (the artifice compared to Ilia’s “naturalness,” was intentional), so that, lacking Behrens’ awkward voice, she still managed to produce the “alien” effect that Ponnelle—and Mozart—were striving for. She came across as self-involved to the point of rapture, and her elegant coloratura produced a very happy event. Her mad convulsions astonished everyone who did not remember Behrens. This was a fine performance and makes us curious about the Anna or Elvira or Fiordiligi she could give us. Behrens, however, shook us in our shoes. (And when Behrens did sing Donna Anna, it was a disaster.) 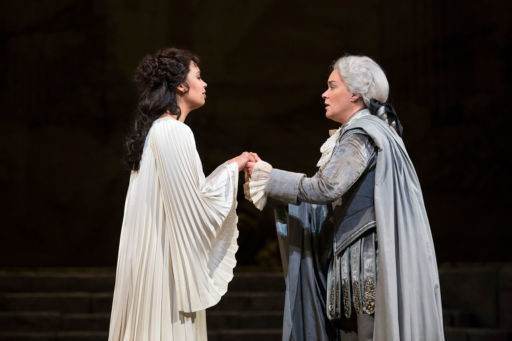 The other gentlemen made an intriguing contrast. Gregory Schmidt, a last-minute replacement Arbace, sang his lines with easy power that suggest a promising future, and got through the coloratura with slight audible effort. House regular Noah Baetge, however, sang the brief but important role of the High Priest with a liquid, melting tone that made one long to hear him in the Mozart roles Polenzani used to grace. Nettuno was sung by Eric Owens with proper dignity. You can’t have a nobody sing the god! (Nettuno is easily offended.) The importance of the chorus to this opera—and the pretty little solos Mozart inserted into the choral text, an effect he and other composers were to build upon—made us the more grateful for Donald Palumbo’s happy cohorts. But if one could raise an eyebrow, it is that the finale to Act II, the chorus of terror after the appearance of the sea serpent, was a bit too brash, too forward. This is one of the very, very few times in all opera that a catastrophe ending a middle act is not sung with all the force at the company’s command; on the contrary, the Cretans run away in nearly breathless terror, and we end in an uneasy piano. It is one of the spookiest effects I know of on the lyric stage, and another proof (if we needed one) of the genius of Mozart and the brilliance of his first really great opera.Photo Marty Sohl/Metropolitan Opera