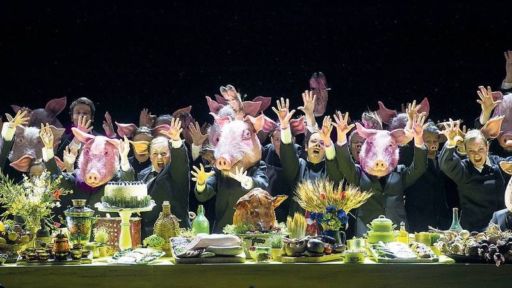 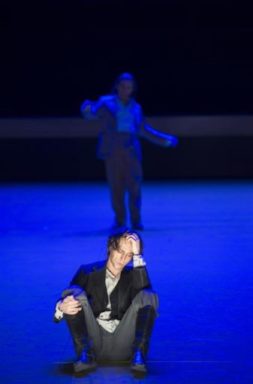 Like most operas by Modest P. Mussorgsky, “Sorocinskaja Jamarka” (Sorochinsi Fair) is a posthumous piece of work. Staged at the Komische Oper Berlin in 1948 it has not seen any revival in the city ever since. There are plain incidents in a loose order which are not related to each other but brought to full life in a popular way by Mussorgsky. He does not only use traditional folk songs and dances but spreads them over the whole composition and even adds his orchestral fantasy “Night on Bald Montain” from 1867 extended to a chorus piece as the dream or nightmare of the country lad Gritsko. Several composers tried to turn the material left by Mussorgsky into a performable opera. The last version from 1932 issued by Pavel Lamm and Vissarion J. Shebalin seems to get closest to the composer’s intentions. It does not polish but acknowledges the coarse structure of the work to reveal its beauty and boldness. It appears to be a musical painting of rural Russian life of the 19th century depicted in Nikolai V. Gogol’s narrative of the same title that is part of the writer’s early work “Вечера на хуторе близ Диканьки“ (Evenings on a farm near Dikanka). Komische Oper director Berrie Kosky who surprised with a highly romantic and sensitive production of Tchaikovsky’s Evgeni Onegin last season approaches Mussorgsky’s mere fragment with a colourful sheet of pictures, preferably in shrill neon colours on an almost empty stage by Katrin Lea Tag whose traditional Russian costumes correspond with the folklore aspect of the plot. First of 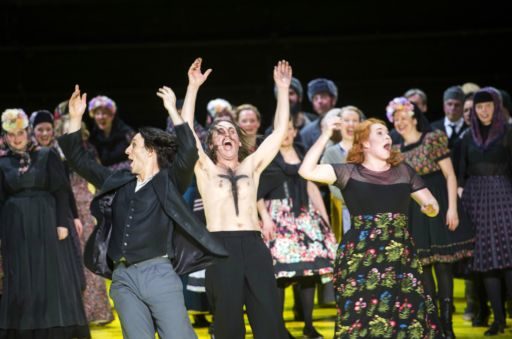 all it is a chorus opera and the chorus soloists of the Komische Oper Berlin (chorus master David Cavelius) excellently supported by the Children’s chorus (chorus master Dagmar Fiebach) and the Vocalconsort Berlin are the musical highlight of the opera night along with the brilliantly playing Orchster der Komischen Oper Berlin under the baton of its parting General Music Director Henrik Nánási who tackles the score with concentrated exactness and the right mixture of grotesqueness and surrealism. At long last orchestra and conductor seem to have found a congenial cooperation. The light design by Franck Evin is worth mentioning as it goes perfectly well with Katrin Lea Tag’s colourful costumes and the slanting stage with a shining floor dominated by a long table across it that is moved forward or back to serve as a podium for the omnipresent Gypsy in the first, Khivrya’s kitchen in the second and a huge laid table in the third acts. Mussorgsky himself considered the second act the core of his opera: nearly 40 minutes of continuous music which brings food and eroticism together. In Kosky’s approach Khivrya is cooking and baking as a prelude until her young lover Afanassy Ivanovitsh turns up. She is feeding and seducing him but is found out after all and has to hide him stuffed in a big roast turkey. Kosky continues that ambiguous appetite in Gritsko’s nightmare when Khivrya’s erotic menu turns into a satanic food orgy. The people are divided into two groups dressed in black and red with pig masks on their heads fighting against one another, on top of it a couple of stilt 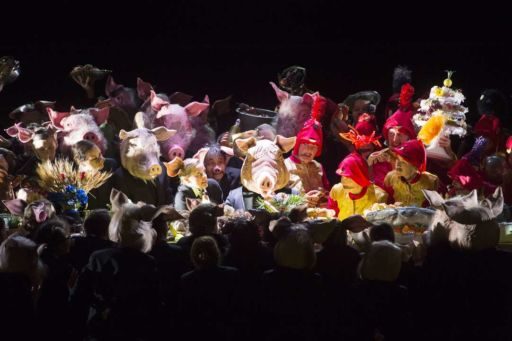 walkers. All that suggests a lively party of the villagers between faith, superstition, death and supernatural apparitions so that the patchwork scenes about the young lovers Parasya and Gritsko, the gypsy’s legend of the devil who once pawned his red overcoat to the local innkeeper, the farmer and drunkard Cherevik and the love affair between Khivrya and the pope’s son Afanassy appear to become episodes or brief and small snapshots as you can see when browsing a strange photo album. Like Gogol’s narrative the plot focuses on the life in the Ukranian village of Sorochinsi and its inhabitants of Russian Orthodox faith and consequently Kosky inserts three out of the four songs of Mussorgsky’s cycle “Songs and Dances of Death” to link the three acts to an opera night without an intermission. Even though the cycle was completed by the composer and it is highly popular in Russia, the songs remain a foreign matter which does not really fit in. The same applies to Nikolai Rimsky-Korsakov’s Hebrew Song presented a cappella at the beginning and the end as a kind of frame. I wonder whether that is Kosky’s strange attempt to emphasize the deep rootedness of metaphysics in rural life in Old Russia to explain the plot. I do not think there is any need to as Mussorgsky’s music and even more his libretto tell their own tale. It is a shame that unlike in Kosky’s Evgeni Onegin or The Fiery Angel before, the Komische Oper does not employ any native singers in this production that you can hardly tell of being in Russian. Even me who is said to have a fairly good command of the language had to refer to the German subtitles to get an idea of the Russian text. I stick to my opinion that Russian opera should preferably be sung by native speakers unless there are singers who are very well 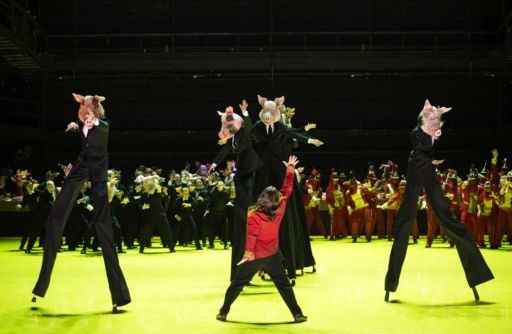 trained in the tradition of the Russian singing school that puts a lot of emphasis on declamation and pronunciation. Kosky’s remark that “Sorochinsi Fair” is made for a company opera house like the Komische Oper is a lame excuse for the arbitrary text handling in spite of convincing vocal performances by the soloists led by the highly comical Agnes Zwierko who uses her resonant mezzo-soprano with organ-like deep notes as the frustrated wife and evil stepmother Khivrya. Jens Larsen is a vocal match in the role of her husband Cherevik. Apart from the previously mentioned idiomatic aspect, his profound bass sounds ideal in Russian repertoire as reviewed before about his appearance in Prokofiev’s Fiery Angel. Tom Erik Lee’s baritone is luxurious for the Godfather and Alexander Lewis’ tenor too white and wiry for the young Gritsko. His tenor colleague Ivan Tursic as Afanassy Ivanovitsh sounds more convincing with his Charaktertenor. Mirka Wagner’s soprano is clear as crystal but a little too neat or for my taste, un-Slavonic for Parasya. Hans Gröning convinces vocally in the gypsy’s superstitious narration about the devil and his red overcoat and remains present stripped to the waist throughout the opera. There was unanimous applause for chorus, orchestra and singers at the end with occassional boos for the production team around Berrie Kosky.Photo Monika Rittershaus