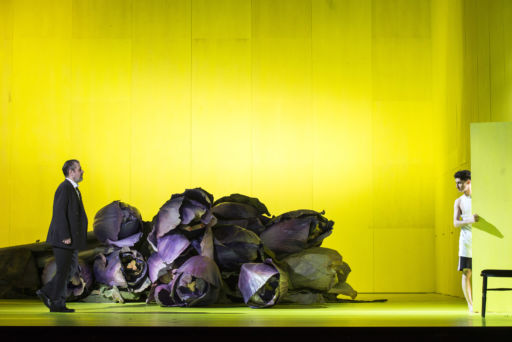 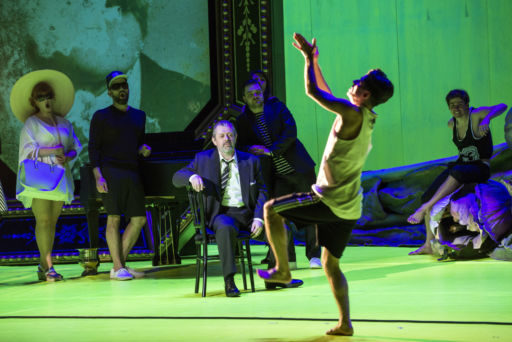 “Death in Venice” is Benjamin Britten’s last and probably most autobiographic opera. Given his bad health condition at the time of composing it, he seems to look back at his own life even though doubtful situations, questions, emotions are part of everybody’s life. As a creative artist he was particularly affected by dwindling inspiration, artistic doubts and inner conflicts. All that is also reflected by the main character Gustav von Aschenbach. Luchino Visconti’s masterpiece “Morte a Venezia” is like Britten’s opera based on the novel “Der Tod in Venedig” by Thomas Mann and whoever has seen the film will be influenced by its strong scenes set on original locations in Venice such as the now run-down Grand Hotel des Bains on the Lido. In the opinion of Thomas Mann “a book is a book and a film is a film” and we could consequently add: an opera is an opera. That also seems to be the approach of the British director Graham Vick. His production does without any direct or visual association with Munich and Venice supported by the sets and modern costumes of stage designer Stuart Nunn. The action takes place in a room with glaring, yellow-green neon walls (Light by Wolfgang Göbbel) that is dominated by a partly mouldered photo of the supposedly younger Aschenbach in a big black frame on the left and a giant bouquet of purple tulips lying across on the right with a grand piano in the middle of the stage. Doors sometimes open on either side to let light and actors in. The minimalistic stage remains in the second part with the photo removed from the frame now lying on the floor and the word ACHTUNG (attention) painted on the rear wall as an indication that cholera is spreading in the city. The empty frame is used by Tadzio’s family as an altar to place bunches of flowers on. Simple black furniture must do to illustrate Aschenbach’s journey. There is no attempt to capture the rowing of a gondola or the lapping of waves. Most of the action just takes place to illustrate and underline Aschenbach’s mental state, his emotions and reflections. The opera consists of a lot of monologues and with the accompanying piano, they seem to turn into one of Britten’s song cycles he used to perform throughout England with his personal and professional partner, the tenor Peter Pears. I admit that the opera does not become clear to me at first sight by the music alone. It does require a live performance, which turns out to be an advantage of Vicks’s production that does not give rise to any boring moment. It opens at a funeral where Aschenbach, perhaps dreaming, perhaps already dead, finds an onstage chorus of mourners ending up in some hanky-panky, perhaps alluding to his sexual desires. Unlike suggested by the libretto Vick uses actors

instead of dancers for the bunch of adolescent boys around Tadzio (Rauand Taleb), obviously the scrawniest among them who Aschenbach falls fatally in love with. In a reversal of the plot Tadzio dies at the end while Aschenbach leaves the room through one of the doors. Vick sets up great crowd scenes when the hotel guests gather in the first act or for Aschenbach’s dream of the contest between Apollo and Dionysus in the second. In the fourth production of a Britten cycle under way since 2013, music director Donald Runnicles conducts the Orchester der Deutschen Oper in a broad and romantic way á la Wagner with rhythmic percussion passages, neo-baroque sequences and 12-tone confessions while Adelle Eslinger alias Mrs Runnicles plays the piano onstage. The many minor roles of the excellent chorus of soloists rehearsed by Ido Arad and Christopher White mix up ideally with the Chor der Deutschen Oper Berlin behind the scene conducted by Raymond Hughes. The likable British tenor Paul Nilon has a monochrome voice like emery paper and you are afraid at the beginning that he could not get through the long and taxing part of Gustav von Aschenbach but he manages it very well with vocal economy striding through the monologues idiomatically. Altogether he leaves a strong impression of a vulnerable, earnest, demonic protagonist. Death seems omnipresent in the opera the more so as Graham Vick hammers out the theme so heavily that it is simply great to see how ensemble member Seth Carico countersteers by breathtakingly slipping between roles as the elderly fop, old gondolier, hotel manager and barber in almost the same costume, the high-heeled leader of the players with a feather boa and Dionysus stripped to the waist. His rich and virile bass-baritone is paired with a natural comic timing and a stunning falsetto which I find a little overdone at the beginning. Counter tenor Tai Oney as Dionysus’s counterpart Apollo appears convincingly helpless. I wonder why composers of the 20th century make counter tenors yell even though Oney sounds like a guttural contralto. Like “Peter Grimes”, “Billy Budd” and “The Rape of Lucretia” before, “Death in Venice” contributes to the Britten cycle at the Deutsche Oper Berlin. The “War Requiem” is to follow and Runnicles has supposedly hinted at “A Midsummer Night’s Dream“. We will stay tuned. Photo Marcus Liberanz