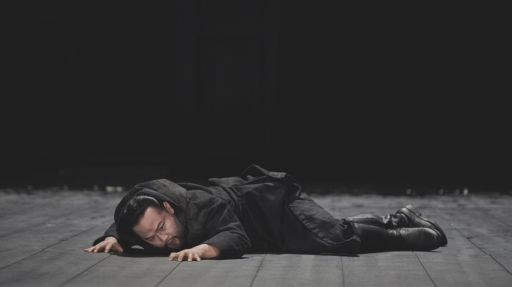 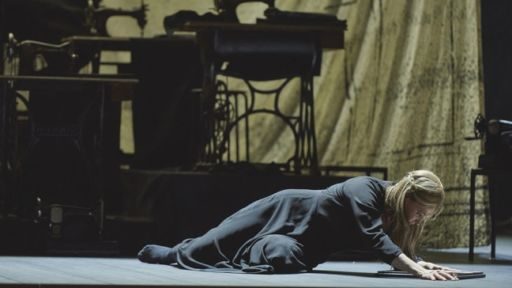 “The Flying Dutchman” was my first encounter with the oevre of Richard Wagner and I was quite as fascinated as by “Elektra” by the other Richard two years later. It was just the beginning of dealing with his operas and there is hardly another composer whose work you will never fully understand. I mean you can go in for it for the rest of your life and you will find new details and subtleties in it again and again. I would not assert that it is a kind of philosophy itself but it has something to do with philosophy. To dispel the prejudice: his music is not heavy or convoluted. It is rather simple if it comes to the notes themselves but its effect is enormous. It may be called pompous and haunting but it cannot be detached from the words or the action which form a unity. The score of “The Flying Dutchman” is formally still structured into arias, duets etc but in its condensed form, it already achieves the quality of later works such as Tristan or Meistersinger. Director Christian Spuck consequently plays the opera without an intermission as suggested by Wagner himself. Stage designer Rufus Didwiszus has created a high black room with tall doors towards the backdrop where the action starts with the ouverture while water is raining down throughout the opera. There is no doubt that water is an essential element of the plot but I find that the constant ripple of the lake on stage affects the music at the softer passages and despite the prejudice that Wagner’s music is as loud as long, there are a lot of them. The stage is empty apart from a big black heap tied up by ropes and Erik is present all the time. Spuck tells the story from Erik’s perspective or rather his retrospect: Senta is dead, the Dutchman far away. Erik comes to the deserted house to live through the plot again in his memory, takes action according to the score until the final scene when he wants to stab Senta to death but is held back by the crowd so that Senta stabs herself. This change to the original end is to my mind as unnecessary as the approach to make Erik look back at what happened. Spuck could tell the story from say Mary’s perspective and it would not make any difference. Spuck’s approach does not make a hero out of Erik. Quite the contrary: he appears as a loser and coward to a greater extent than usual. The same applies to the Dutchman somehow. Breaking down several times he seems to be a weak ghost tired of endless seafaring rather than 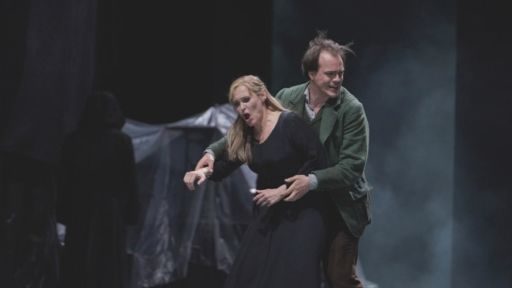 the damned mysterious phantom who is looking for redemption. Wagner’s basic idea of salvation simply does not take place. I mean it does not need to be the final picture of Senta who has thrown herself into the sea and the Dutchman ascending to heaven but modern technology such as video, projections etc could make something like that possible. It also gives me the impression that the director does not care much about Senta, either. Since Harry Kupfer’s production in Bayreuth in 1978 it has become quite common to have her run around with a painting of the Dutchman, climb chairs during the ballad etc. And what about Daland? He remains the cliché of the greedy seafarer who sells his daughter for the Dutchman’s treasures. It is a shame there is not much more to say about the stage than the ropes around the before-mentioned black heap are loosened to pull up a kind of tent to indicate that the second act takes place in a room with genuine sewing machines which need to be protected by big foils in the third act because of the permanent rain. I dare to say that the production does not abound in new ideas or a sophisticated Personenregie that you will often find in other stagings. But there is a plus due to the fact that Spuck is a dancer and choreographer. The mass scenes are set up with an elaborate choreography for the chorus. Light designer Ulrich Niepel does not have too much to do in this production as the stage is (too) dark most of the time and the use of electric torches by the sailors of Daland’s ship at the beginning makes me call it a torch production typical of the late Karajan era. Emma Ryott’s mostly black costumes fit into the gloom and doom setting. So it is Wagner’s music that has to carry the Romanticism of the opera. Whatever can be heard from the pit is convincing. Donnald Runnicles is an experienced but overrated Wagner conductor to my mind. He goes for a broad and loud sound and mistakes slow tempi with musical dynamics such as in the duet between Senta and Dutchman in the second act. Altogether he makes the Orchester der Deutschen Oper play correctly apart from some weakness in the wind section. Chorus master Raymond Hughes makes the Chor der Deutschen Oper Berlin sing powerfully but cannot avoid a few wobbles. Since his debut in the title role at the Bayreuth festival in 2012 Samuel Youn has been a much sought-after Dutchman but his 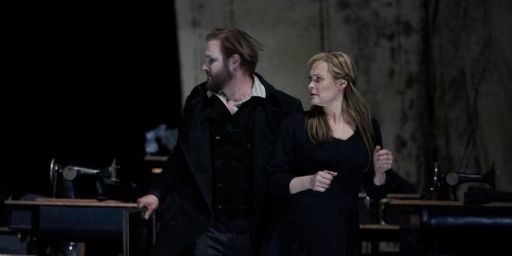 monochrome, nearly vibratoless bass-baritone was obviously suffering from a cold in the premiere and revealed some problems in condition towards the end, not to mention the unidiomatic text handling; yet his reliable performance does not justify the final boos. Tobias Kehrer as Daland does not make much out of his promising vocal material. His bass sounds thin in the upper register and lacks some resonance in the lower. I wonder if that is the result of some overstraining or rehearsal tiredness. Senta is sung by Ingela Brimberg who seems to develop into another case of the Violeta Urmana-/Nadja Michael-syndrome: forcing a basically beautiful mezzo up to soprano notes which sound quite convincing but reveal that the voice is not at ease at all, which will result in a drain on vocal strength in a few years. Due to the director’s focus on Erik Thomas Blondelle grades up the character by tackling it vocally with his lyrical Mozart-proven tenor but I object to his opinion that he could sing Belmonte and Erik within one week and consider Erik the present limit for his voice. His tenor colleague Matthew Newlin sings Daland’s steerman convincingly even though the director makes him appear too ham-fisted. Ronnita Miller as Mary looks like out of “Gone with the wind” and sounds luxurious in a role that is often cast by elderly singers. To sum it up, I wonder if the production will see twenty years in the repertoire of the Deutsche Oper Berlin.