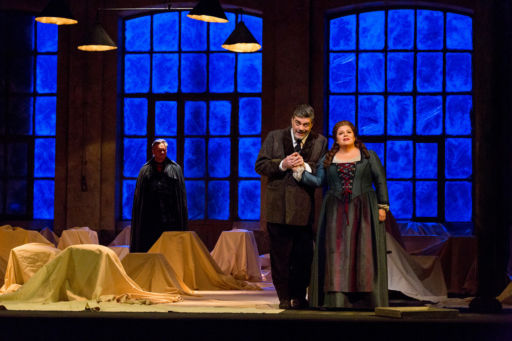 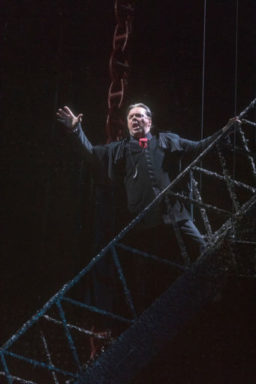 Der Fliegende Holländer is making a rare return to the Met with an unusually strong cast, led by incoming Music Director Yannick Nézet-Séguin. The performance runs two and a half hours without intermission, as is nowadays standard. The maestro seemed in charge of the orchestra but not entirely in command of the score, which seemed to slow down, hold back, whenever he encountered the theme of predestined and sacrificial love. It is as if he was determined to underline, emphasize, italicize the theme, which is not necessary—Wagner has already dinned it into our ears, from the prelude onwards. We cannot possibly escape its importance. We should let Wagner tell the tale his own way. He was a master of the theater and can be trusted in these matters.
The Dutchman was Michael Volle, previously heard here only as Mandryka and Hans Sachs. The voice is not enormous but his skill in deploying it is masterful; his despair in the initial monologue, his fury in the final trio seemed to be self-consciously restrained as if he were holding back a rage that might destroy him if unleashed. It was a superbly paced, intelligent and musical performance. Amber Wagner, the Senta is an exceptional hochjugend soprano, with a voice of great size and the proper strength, whose metal does not preclude great beauty. She has sung wonderful Elsas in Chicago and Ariadnes in Montreal, and only the Met’s disinclination to Wagner nowadays (a mistake, in my opinion—the house was quite full for this Holländer and the Tristans last fall) accounts for the rarity of her Met appearances. She is a full-figured woman but an able actress, and she moves well on stage. I hope she will be our Sieglinde in the next Ring—she will be singing the role in Australia this summer, and she has the expressive lyricism for it. The top is not 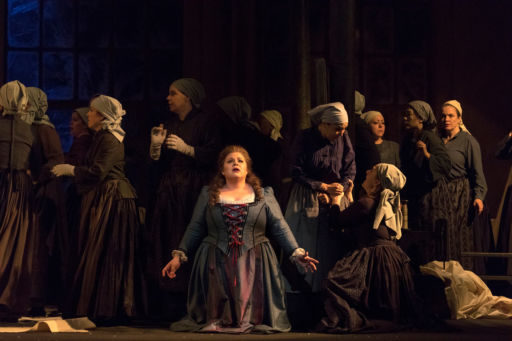 detached from the rest of the voices, as with some dramatic sopranos, but evolves properly out of a clear line. I could have hoped for more intensity, of desperation in this fey role—I was raised on Leonie Rysanek’s manic Sentas—but Wagner is a strong singer, from ballad to fatal leap. There will be time to fill in details. Franz-Josef Selig sang a satisfyingly amiable Daland, the dense but human figure who must hold his own in duet with archetypes. He phrases graciously if he does not overwhelm us with sound. Erik was a debutant, AJ Glueckert, a substitute for Jay Hunter Morris, who withdrew before the run began. Glueckert paced himself with caution and enthusiasm, and his judgment paid off: His wooing of Senta in the last act was extremely beautiful, his contribution to the trio most effective. Ben Bliss, best known here for Mozart, made a most appealing Steersman. The basic August Everding production no longer surprises when it holds back from the antique supernaturalisms that the score might lead us to expect, but its snow storms, carnival costumes and vacant spaces allow the characters and chorus ample room. Some might object to a Dutchman and Senta who sing their passion quite so far apart on the stage, but they are, after all, in different worlds. It is a duet of separate monologues rather than a meeting of bodies. Sung by these voices, it will do very nicely.Photo: Richard Termine/Metropolitan Opera.