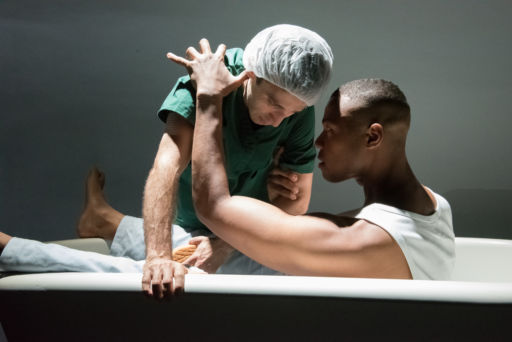 In 1708, when the 23-year-old Handel spent a wanderjahr in Italy, picking up odd jobs and local style wherever he found them (Venice, Florence, Rome), he secured a gig composing a serenata, a short chamber oratorio for three singers, for a ducal wedding in Naples. The subject was Ovid’s triangle of the river nymph Galatea, the shepherd she loves, Aci (Acis), and the monstrous cyclops, Polifemo (Polyphemus), who busts it up. A few years later, Handel would set an English-language version of the story, Acis and Galatea, with entirely different music, and that remains justly popular. But the serenata, which has just been staged at National Sawdust in youthfully chic Williamsburg, is remarkable, too: for one thing, it demonstrates that, even at so young an age, the composer was already in full command of the melodic, orchestral and emotional resources that would continue to produce astonishment for half a century. And in this tyro work, not only are the melodies exquisite and appropriate, he experiments with duets and even a trio, counterpointing the lovers against their oppressor—very rare matter for Handel (or any baroque composer) at this point in time.
Aci, Galatea e Polifemo was not intended for staging and hasn’t a very detailed plot, but that’s the sort of thing that whets the appetite of today’s opera producers. The piece’s brevity (about eighty minutes) and the story’s simplicity provoke invention, and this one has been performed by many European groups. No baroque music-drama has much in the way of surviving theatrical tradition, so there are no old devotees to be outraged by modern staging techniques. The revival of baroque vocal standards meets the acting chops expected of opera singers nowadays.
National Sawdust is a theater complex in fashionable Williamsburg, Brooklyn, one subway stop from Manhattan. Musically, the venue specializes in the work of living composers, electronic and ethnic eccentrics, intimate concertizing. The hall seats about a hundred (no fixed chairs) and the acoustics are vivid. The three experienced singers of Aci, Galatea e Polifemo hardly had to raise their voices to fill the room. Nine musicians of the Ruckus Ensemble included percussion effects inserted in the score for dramatic effect, to raise tension, and for a couple of electronic touch-ups, so that (for instance) the voice of the murdered Galatea could seem to haunt the bewildered Polifemo as he gloats over her corpse. (In Ovid, of course, he murders Aci not Galatea.)
Christopher Alden, the director, set the piece in a private spa, a claw-footed bathtub surrounded by projected walls of Delft tiles that wavered with watery light or were spattered with oozing blood. Titles were simple, and the acting of repeats so effective one hardly needed them.
Aci and Galatea were composed for castrato soprano and alto, respectively—they are often played, nowadays, by two women, but in this production Aci was a soprano, Ambur Braid, and Galatea a countertenor, Anthony Roth Costanzo. Gender was a nebulous concept anyway; we saw two sexually indeterminate figures, dressed alike in desexualized scrubs and hair nets, cleaning the tile-lined spa. They appeared to be servants of some kind—serfs? slaves?—their tenderness for each other interrupted by the domineering Polifemo, a bass, dressed in rather more colorful and masterful garb, who played games with their affections, threatening and teasing by turns. This could only end in tragedy, but death is no bar to a final chorus. Braid, a frequent Queen of the Night, sang the determined Aci with a brilliant sound and vivid ornamentation, but strayed occasionally, uneasily, from pitch. Galatea, who has more beautiful music, was taken by Roth Costanzo, who also co-produced the entire venture and is becoming one of the more familiar names of his generation in the American baroque scene. His voice ranges from lofty notes to low tenor ones, following the ecstasies and resentments of the character, never allowing us to assume we know what a countertenor’s range should be. His forceful declamation, mated with exceptional diction, is more dramatic than seductive. There are more beautifully sung Galateas on youtube (usually women), but Roth Costanzo plays her to the agonized hilt. I like my countertenors to produce sexier sounds, but this one has a star quality that remains persuasive despite an inferior instrument.
Polifemo was Davóne Tines, whose supple bass-baritone with its potent hints of irony and threat rose two and a quarter octaves in a smooth bel canto wave to a sweet near-alto, an astonishing feat of sheer vocalism. His ornaments were elegant, his musicianship a pleasure, his stage presence exciting. This is a singer to watch for, a coming man. Clay Zeller-Townson led a well paced ensemble performance in which the tension of the story seemed to wax and wane to demonstrate the abilities of the singers, the give and take of the relationships of the mythic figures. Photo Jill Steinberg