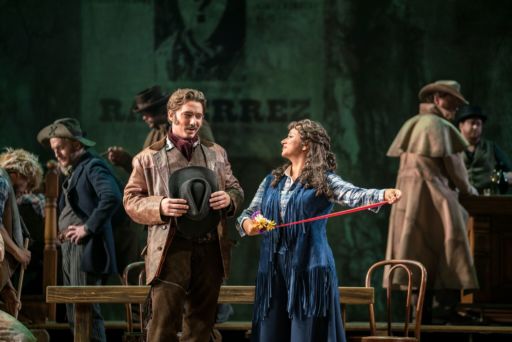 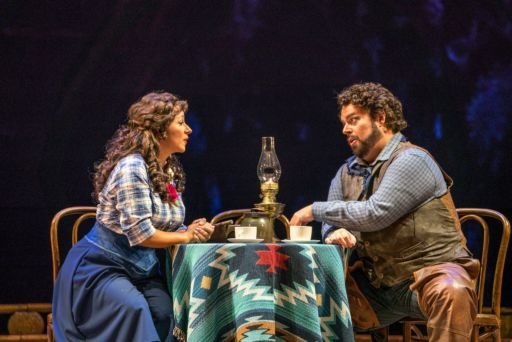 For all Puccini’s wish— it was also Toscanini’s and Giulio Gatti-Casazza’s desire—to create an American epic, an expression of the United States in operatic form (including an upbeat, all-American love-conquers-all ending), Fanciulla del West is, in fact, his most Wagnerian score, with very few numbers that can be exploited out of context. For this reason, or because it has a happy ending, the opera has not been among his most popular; it is infrequently given even in the city of its birth. But those who love it, love it a lot. For the New York City Opera, an American company putting itself back on its feet, a worthy Fanciulla is just the ticket.
Puccini saw David Belasco’s 1905 hit play, The Girl of the Golden West, when he arrived in New York for the triumphant Met premieres of Madama Butterfly (based on another Belasco play) and Manon Lescaut. Puccini loved to attend plays in languages he did not speak; if they touched him despite that barrier, he knew they’d work as opera libretti. This first Gold Rush horse opera of a play reached its mark with situations already a little trite from dime-store literature and theater, but it had never been given a proper sound before, other than the folk songs Puccini attempted to quote in his score as well. His miners often sing “Doo-dah, doo-dah day,” though not to the tune of “Camptown Races.” 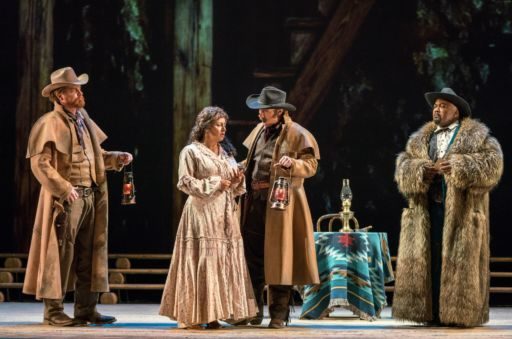 The City Opera’s co-production (with Lucca and Cagliari—it has also been seen at Opera Carolina in the United States) makes use of projections of Northern California scenery and a couple of interiors so that the narrow stage of the Frederick Rose Theater is no hindrance to its success. The scenery does seem to move a lot when the story is not moving, but that’s a small price to pay. At least they have not set the opera in a Siberian gulag or a Parisian fashion show, and I am grateful. The director, Ivan Stefanutti, appears to have taken great pains with the small roles, keeping them naturalistic and in character, but the leads seem to have been permitted to do whatever they liked, and I should have preferred more care, more singing of love by a lover to another person than to the top balcony.
Kristin Sampson sang the title role. She is a passable actress and a passable spinto, and her performance was acceptable. She is not especially loud or especially lyric, and I did not feel she inhabited the part until well into Act II. Minnie has a lot of personality, a rock-like faith in her moral outlook, and this keeps the men in awe of her far more than the fact that she is the only “Anglo” woman in the neighborhood. We did not feel her yearning, her anguish, her sweetness. There are limits to what Puccini can do for you if you do not enter into his shadows and inhabit them. 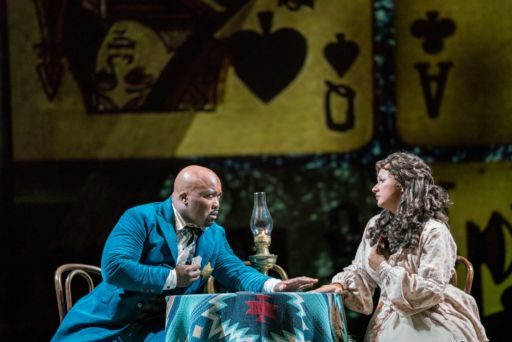 Rather making up for Minnie’s imperfections, Jonathan Burton sang a soaring Dick Johnson, free and pretty as a bird on the wing. It was a pleasure to hear his high notes, and his seduction of Minnie was very believable. The City Opera gave us the complete love duet in Act II, clipped in many performances (it does go on for a while), and great was the delight thereof. He has high notes Caruso, the first Johnson, did not possess, but lacks Caruso’s low growl for the phrases sung in extremis. He sings a lot of Puccini in these parts, and I’d love to hear his Cavaradossi or Rodolfo. A fine leading man and reassuringly tall. Kevin Short, though unpleasantly costumed in teal and inclined to sing of his ardor for Minnie to the balcony rather than to the girl, was an effectively agonized Sheriff Rance. Michael Boley sang a fine, sympathetic Nick, Alexander Birch Elliott a noble Sonora, Kenneth Overton a moving Jake Wallace, and Hyona Kim was quite impressive in the tiny role of Wowkle with some great big luscious notes that suggest a Dalila or Erda in her future. 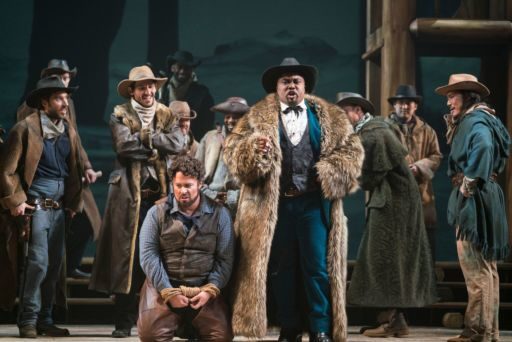 James Meena filled the background with lovely falling phrases of this enchanting score, and gave its climaxes the proper weight and tension. At times he drowned out Miss Sampson, but that’s the sort of rivalry that takes a performance or two to work out. Four performances were given, and the many admirers of Fanciulla were satisfied. It would have been nice to have a horse in the final scene, or at least the projection of a horse. The last time I saw this opera performed by the New York City Opera, Maralin Niska entered on a horse, dammit. True, it got away from her and rambled all over the stage and she was almost hurled into the pit, but it was a thrilling scene, and the lady, a great and game singing actress who left us only last year, kept right on singing. Photo © Sarah Shatz