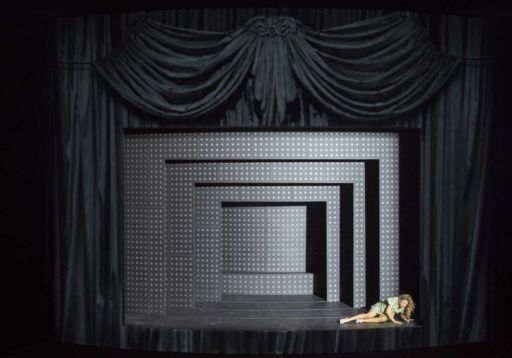 After his acclaimed debut at the Bayreuth Festival this summer with a new production of Wagner’s “Die Meistersinger von Nürnberg”, opera director Barrie Kosky is back in Berlin to open up the festival season of the Komische Oper Berlin. It was founded 70 years ago by Musiktheater pioneer Walter Felsenstein who has ever since influenced the style and character of this unique opera house that can still boast about being an Ensembletheater. This precious feature of the theatrical landscape in Germany has more and more given way to the international stagione system above all at bigger opera houses with jet-setting star singers, conductors and directors to zap up their productions to compete on the meanwhile mercilessly commercialized opera market. It has become an open secret that smaller German theaters often stage more aspiring and interesting opera productions by relying on their own companies. In case of a new production to start the Komische Oper festival season with, it was first and foremost Barrie Kosky’s own ambition to produce “Pelléas et Mélisande” by Claude Debussy on the grounds that the world premiere took place at the Opéra-Comique in Paris which is comparable with the Komische Oper Berlin. Another reason may be the fact that he can exclusively cast the opera with singers of his team. The result is undoubtedly an excellent musical performance due to Jordan de Souza, the new Kapellmeister who conducts his first premiere at the opera house. He prefers a chamber music sound to bring forward the shimmering poetic and impressionistic details of the score in line with Berrie Kosky’s approach of a chamber play but falls a little short of the broad opulent orchestra sound that Debussy stands for as a composer of symphonic rather than opera music. That is quite to the advantage of the Orchester der Komischen Oper which is not used to the score as the opera has never been staged at the Komische Oper yet and mostly young singers who can concentrate on a clear declamation of Maeterlinck’s portentous text as well as the vocal requirements of their parts that are partly beyond the traditional pitch of the operatic voice. Baritone Dominik Köninger starts a little self-conscious underlining Kosky’s approach that Pelléas is quite as or even more naïve and innocent than Melisande. He manages the unusual tessitura between tenor and baritone very well with a largely appropriate nasal sound at the beginning and an increasingly free emission of higher notes in the more dramatic passages throughout the night. After succeeding in leading roles in “Cendrillon” by Massenet and “L’enfant et les sortilèges” by Ravel Nadja Mchantaf seems to be a specialist in French opera and her Mélisande confirms that. She combines soprano and mezzo passages in a natural way and develops the character from the shy girl to a loving woman by unusual dramatic moments in the second part. Günter Papendell also goes on with his role portrayals and his Goloud is almost sympathetic rather than a sheer villain. His virile baritone sounds ideal in the role and is a good counterpart to Dominik Köninger’s softer Pelléas. Another plus is Gregor-Michael Hoffmann from the Tölzer Knabenchor as Yniold. Unlike the boy in the world premiere, he is able so sing the whole part with his boy soprano. Geneviève is sung by Nadine Weissmann whose plush contralto is a rather luxurious cast for the relatively small vocal part. A member of the company for many years, Jens Larsen uses his sonorous and present bass for the aged King Arkel. Honestly I have second thoughts about Barrie Kosky’s production. Pelléas is an opera with little action, a kind of mental drama. A lot of details such as Mélisande’s former life remain vague and uncertain. There is plenty of symbolism and darkness seems omnipresent. Is it an association with a mental state such as depression or just a feeling of not being well? Mélisande seems remote but is trying to love two men at the same time. Kosky’s response is something between nothing and the illustration of nothing. Stage and light designers Klaus Grünberg and Anne Kuhn have constructed a black and white picture stage with circular segments that revolve in either direction with a rotating washer drum in the backdrop enabling a flexible and fast change of the scene with actors appearing or disappearing. It certainly requires a good deal of timing that may be effective but barely illustrates the action. At the beginning Mélisande changes dresses designed by Dinah Ehm for every scene like in a fashion show to be obviously pregnant in the second part. Is it meant to prevent boredom like the increasing violence towards the end? All that remains mysterious including the fact that even Arkel seems to have a finger in the pie about the child Mélisande gives birth to at the end. I hope the production will keep its place in the repertoire. The applause at the end was joined by a few boos indicating that not only I have doubts about it. Photo Monika Ritterhaus