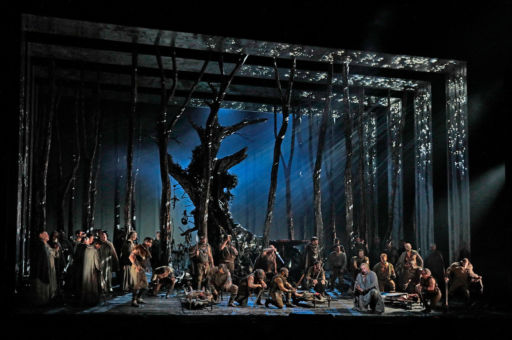 New York, Metropolitan Opera
“NORMA”
Opera in due atti su libretto di Felice Romani
Music Vincenzo Bellini
Norma MARINA REBEKA
Oroveso MATTHEW ROSE
Pollione JOSEPH CALLEJA
Adalgisa JOYCE DIDONATO
Flavio ADAM DIEGEL
Clotilda MICHELLE BRADLEY
Chorus and Orchestra of the Metropolitan Opera
Conductor Carlo Rizzi
Chorus Master Daniel Palumbo
Director Sir David McVicar
Scenes Robert Jones
Costumes Moritz Junge
Lights Paule Constable
New Production
New York, 20 October, 2017
Norma was created as a tour de force to rival the many operatic settings of Medea, and the ladies who sang it in its first decade or so were all renowned singing actresses: Pasta, Grisi, Malibran, Ungher, Frezzolini, Strepponi. The opera is so designed that you can’t get away with it without rare skills at lyricism and suave ornament, but there are also many scenes of confrontation and forceful declamation, not to mention an anguished soliloquy of near-infanticide and two powerhouse finales. Norma must be passionate, spiritual, imperious, murderous. You must believe she might kill the children. I have never believed that at any performance of Norma, including several when I hoped she would. Every Norma brings her own pack of cards to the part and must play a great many of them, from soft to loud, from delicate trills to crackling drama. And everyone who knows the opera brings expectations to it and is sure to find something unfulfilled. A pretty Norma may lack excitement, a thrilling one may growl the bel canto or seem less than possessed during “Casta Diva.” Outside Italy, where the opera has always been a favorite, they used only to revive it when an extraordinary soprano, a Ponselle or a Callas, showed up to lay claim to it. But then Callas made it seem so rewarding and Sutherland made it sound so easy that everyone wanted to sing it. Nowadays everyone does, appropriate to the part or not. The Met’s new production by Sir David McVicar debuted on opening night last September, with Sondra Radvanovsky in the title role, and will conclude in December with Angela Meade. The vehicle was intended as a role debut for Anna Netrebko, but she thought better of it. As I had heard the other two ladies in 2013 (and on previous occasions), I chose one of two performances given to Marina Rebeka, a Latvian soprano who impressed me last year in Guillaume Tell. One might have preferred that Rebeka wait another year or two for her lovely voice to grow a size larger, but let’s assume that she knows her instrument and its capacities better than I do. On Friday night, she did not disappoint.
Rebeka’s voice is a cool, sizable and even, perfectly-placed bel canto instrument, with none of the squawls that mark Radvanovsky’s changes of mood or the technical flaws that Angela Meade appears to ignore. Rebeka’s voice swells to fill the Met without straining to do so, and intense feeling does not occlude the flow of lovely tone. Her fil di voce is prettily turned, her trills very decent, her ornaments of repeated cabalettas personal and satisfying. “Casta Diva” was graceful, the cabaletta intense, the initial declamation commanding, the diction excellent—every word of the text was clear. The voice warmed considerably when Adalgisa appealed for her aid, then turned icy rather than ablaze at the entrance of Pollione. The blend with Joyce DiDonato’s Adalgisa was almost too perfect—I am fonder of that duet when the voices present a contrast in quality (Stignani-Callas or Horne-Sutherland).
Rebeka’s voice sometimes thins a bit at the top but never becomes shrill; you might not notice. Some fans are not happy with any Norma unless her anguish does not merely express pain but grumbles it. Rebeka can be intense without departing from beauty. She stood silent during the War Chorus instead of joining it hysterically. The final scene rather lacked gravitas—she begged Oroveso’s mercy for her children as if it were unfinished business rather than a desperate entreaty, but this may have been McVicar’s staging of the scene. This was a beautifully sung Norma and a better than passable portrayal. I will be curious to see Rebeka develop it in future years, and I will certainly catch her in any other role she sings in New York.
Sir David McVicar’s staging is old-fashioned and bland, which offended several reviewers. I prefer it to choosing some wildly different historical era and situation for no reason at all. McVicar fills the stage with emoting, bare-chested Gaels, and I do not understand why Adalgisa, a novice who has not yet taken vows (per the libretto) is Norma’s chief assistant during “Casta Diva.” The wattle-and-daub hut that is Norma’s residence, though five times as large as such a hut would have been, is far less distracting than the residential scenes in the Met’s previous productions. The menhir and sacro bronzo of the conclusion have the proper dignity, and I liked the way the tribesfolk threw stones at their priestess as she walked to the fire, but once again an overemotive intrusion by Adalgisa was unwelcome and distracting.
Joyce DiDonato’s Adalgisa has the poignant charm we expect of her. Her appearance and her acting were puzzling, but neither can have been her idea: Surely a Druidic postulant would have long tresses not an Audrey Hepburn bob, and since she is pledging to a celibate order, why is she provocatively off-the-shoulder all evening? And why does she grovel during her duet with Joseph Calleja’s Pollione? Tweaks in revival would cure these puzzles. Calleja is a robust figure, burly and preening—perfect for the ego-driven and insensitive Pollione. The music troubled him in the opening scene, where he omitted a top note, dropped the second verse of his cabaletta and ended off pitch anyway. “He always misses that note,” muttered the woman beside me. Couldn’t he work on that? But his upper register sounded liquid and free in the music composed for Rubini, and his attractive lower range was persuasive in the final duet with Norma. The voice expands to power and great if baritonal beauty at such times.
Matthew Rose, dressed to kill (leather armor, you know) rather than in the pontifical robes usually assigned to Oroveso, was smoothly effective in both the summons to war and his agonized discovery of daughterly betrayal. Michelle Bradley, a singer new to me, sang Clotilda, riveting my attention with each of the few notes she got to sing. Keep an ear out for this one!
Carlo Rizzi, who conducted the score for the last Met revival, returned with few new ideas. The evening’s tempo was as swift as Bellini permits—face it, this is a work of classic, expansive pace; it cannot be hurried without forfeiting its proper mood. Rizzi appeared to be in close rapport with his singers, supporting and never rushing them. I felt a certain shove only during the overture, which was played with slight distinction, and in the magnificent conclusion of the opera, which did not surround and overwhelm as this vision of Brunnhilde-avant-le-nom ought to do. Wagner adored this opera, and I am convinced the finale was on his mind as he composed the Immolation. But Rizzi did not produce that effect. The chorus sang lustily but with perhaps too many distracting savage dance moves.