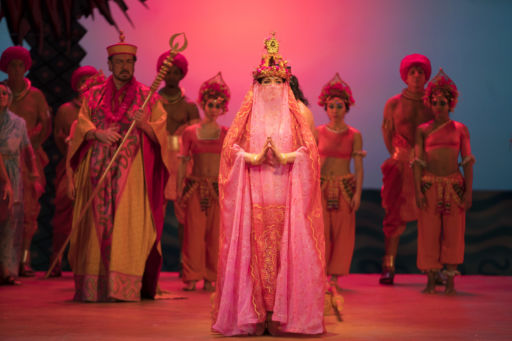 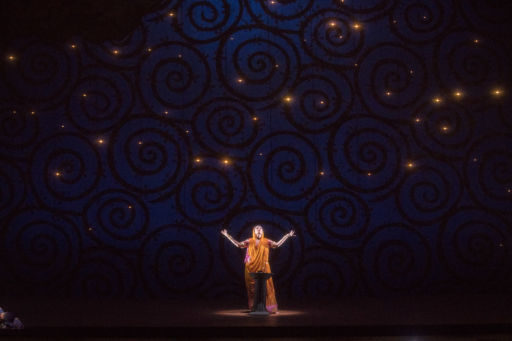 Saris and loincloths and turbans – oh my! – in implacable shades of pink, orange and turquoise; tropical vegetation in a dozen hues; a blue-columned pagoda frescoed with bosomy goddesses; dances with daggers, with cudgels, with animal heads. Lyric Opera of Chicago’s production of The Pearl Fishers is all color and glitz and lots of “exotic” dancing. What a relief it is to be so unreflectingly entertained! Politics does not matter; only the music matters, and LOC did a fine job by Bizet’s exotic, flute-flavored score. The last time I saw this opera, the set was a modern Asiatic slum with towering tenements, spectacular video for the angry storm and no room on the stage to dance. But this is a fairy tale, a tale of three people in love threatened by a preposterous religious taboo. True-to-life concerns like overcrowding and air pollution are of no interest to any of the characters or the composer who created them.
Andrew Sinclair directed, skillfully involving the crowds in the drama taking place before us. Zandra Rhodes did the gorgeous and fanciful sets and costumes, but it is the dancing that really stands out, created by John Malashock in what look to the untrained eye like versions of South Indian dance. The

dances are a very big deal, central to the culture of the village, creating an exotic milieu in which the simple story gathered some exotic weight. They were inventive and distracting events in (except for the storm that ends Act II and the fire that ends Act III) a rather slow-moving score. Matthew Polenzani’s fine tenor seems to be gaining power and weight with the years (and a bit of girth), and his “Je crois entendre encore” was beautifully offered. Even more delectable was his seduction of Leïla, “Dieu puissant, le voilà.” He retains the easy lyricism of his career as a Mozart tenor, but I would not be surprised if he moved towards heavier Italian repertory; he would be admirably suited to Donizetti and middle Verdi. His singing was matched by the cool, delectable beauty of  Marina Rebeka’s Leïla. She sings the light coloratura with finished excellence, but she can easily project, even in a hall the size of the vast Lyric Opera, the intensity of her pleas for mercy to Zurga in Act III. Mariusz Kwiecien, who sang Zurga, announced that he was suffering from a cold, which may account for a certain occasional dryness, but his self-tormented scena at the opening of Act III was rivetingly effective. The pretty score, with its distant, fragrant recollections of earlier tunes, was graciously performed under Sir Andrew Davis’s baton. The orchestration is the more poignant in that, for us, it includes pre-echoes of Carmen, ten years in the future. PhotoTodd Rosenberg