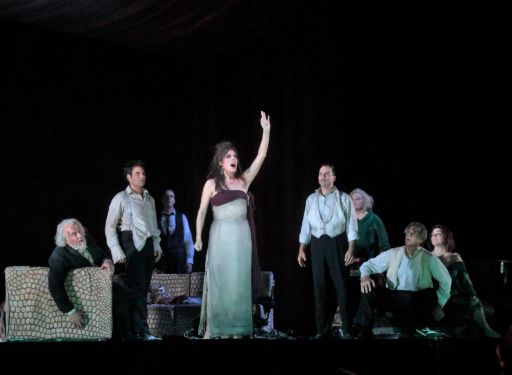 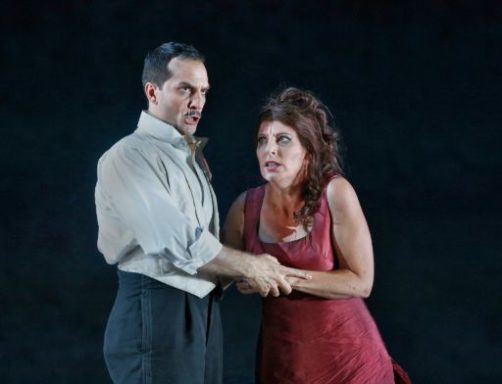 Thomas Adès, whose last opera (which played here five years ago) was The Tempest, chose a movie as the source for his new opera, The Exterminating Angel. After its Salzburg premiere last year, Angel had its first American performance at the Met last Thursday. Most operas of the golden ages were based on popular plays or short novellas, and the trend to full-length novels in recent years has hardly produced a run of successes. Novels are, perhaps, too complex for summing up in the average libretto. But screenplays resemble plays: they are more dialogue than anything else, and dialogue can be set to music.
More puzzling, maybe, is Adès’ choice of Luis Buñuel’s parable about a high-society dinner party that no one is able to leave. The reason for their entrapment is never explained. Weeks go by, the people fall apart and the room is wrecked, but no one can leave—yet nothing otherwise supernatural seems to occur. Buñuel’s surreal jokes (he first got into film as a pal of Salvador Dali, remember) are very subtly handled in the wonderful film, the camera gliding among the slowly decaying civility of a large cast, the wit subtly and delicately implied.
The difficulty in composing music for this story is the absence of the usual essentials of story. The characters are types, not individuals; their individuality is of no significance. It is the gradual collapse of their social world that intrigues us even more than the question of why this is happening, which is barely asked. Adès has said that, to him, the story is about a collapse of will, perhaps the will of a ruling class, but I’m not sure how one would depict that in music—and nothing in the score of the opera suggested that Adès has done so. Having, like most modern operatic composers, renounced melody as an expressive tool, Adès is obliged to fall back on vocal extremes and orchestral effects. He is too aware of the human voice simply to scream at moments of 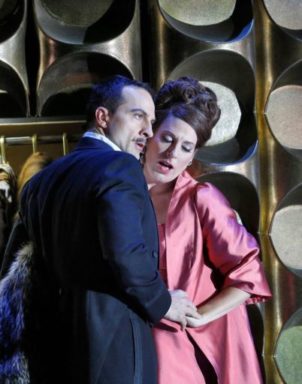 excitement; his ladies, especially, sound full-bodied and sensuous. One exception, though, was Audrey Luna, for whose freakishly high soprano Adès composed the role of Ariel in The Tempest. Ariel is a supernatural being, so that Luna’s talents seemed appropriate to her musical presence. But in Angel, she plays an opera singer who has just sung Lucia. She is no more significant and her position in the drama no more immediate than that of any of the other imprisoned guests, but her every note, all of them high and shrill, makes her stand out from the crowd, a neon sign or nails on a blackboard. Adès, I think, is having a joke with a favorite singer, but it is a false note in an ensemble piece. Alice Coote, Christine Rice and Sally Matthews are each more of a pleasurable presence. They seize a moment of ensemble when attempting a Qaballistic ritual—an operatic update by librettist Tom Cairns; in Buñuel’s original, they are men attempting a Masonic “summons,” but the Masons are more passé than they were in 1962 in Mexico. Iestyn Davies stands out, too, because he is a countertenor, which in the world of this opera means he is also a homosexual given to perversions and drugs. The fiancés, Sophie Bevan and David Portillo, get a Tristan-esque duet before their inexplicable suicide. None of the other men stand out from the crowd and the incidents are not set to music to provide individual character.
Since none of the characters plays a significant role in the drama—what drama?—it will be difficult for the viewer to tell them apart. The men spend most of the opera in black tie; only stout, bearded Sir John Tomlinson, as Dr. Conde, the voice of reason (but there is no reason here!), stands out. The ladies, however, are in splendid gowns, sixties stylish, each in a different color, wittily achieved by Hildegard Bechtler, who designed two versions of each gown so that they could change into a ragged, much lived-in versions for the last act. 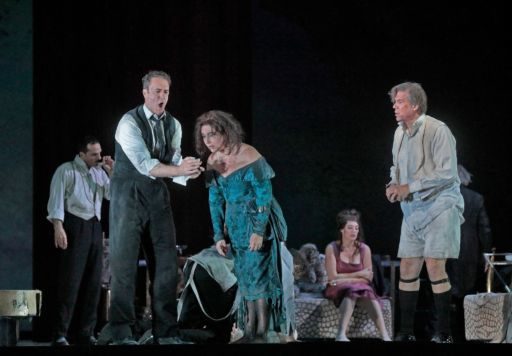 Adès, who conducted the performance, is an orchestrator of dazzle and resource, and he puts the splendid Met Orchestra through its paces. The percussive effects and rhythmic motifs are ingenious; they tell portions of the story when the libretto does not, supplying background and flavor. A waltz, naturally, is the setting of inane social chitchat, not unlike the “courtly” music of Wagner’s Isolde pouring scorn on worldly hypocrisy. The pounding orchestral interlude between the first two acts, march rhythm that sounds like drillwork, is performed before a lowered curtain while a stage-high ghostly shadow moves from left to right, the only manifestation we get of the oppressive title character—if that, indeed, is what it is. Perhaps Adès’ cleverest touch is his conclusion: Where Buñuel reprieved his guests from one inexplicable captivity only to corner them in another, Adès implies, with choral hysteria and ominous orchestration, that their escape to freedom is a hollow one. Stating nothing, suggesting everything, is ambiguity on Buñuel’s level. Photos  Ken Howard/Metropolitan Opera