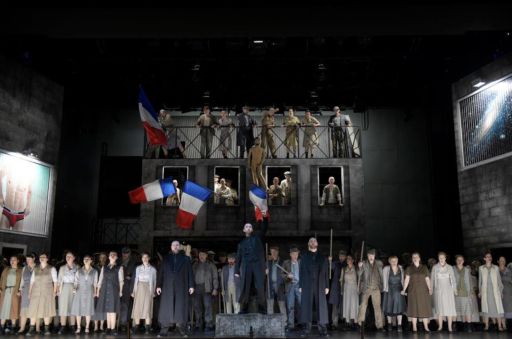 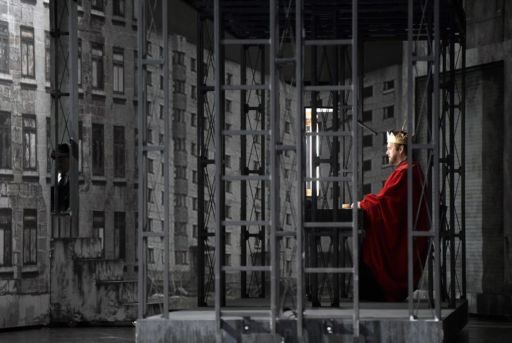 The Deutsche Oper Berlin has now staged Le Prophète to complete its cycle of operas by Giacomo Meyerbeer after Dinorah in 2014, Vasco da Gama in 2015 and Les Huguenots last season. His Grand opéra is about the life of John of Leyden, an Anabaptist leader and self-proclaimed King of Münster in the 1530s. Meyerbeer’s librettists Eugène Scribe and Émile Deschamps garnished the plot with a love affair between the innkeeper Jean and his fiancée Berthe who is coveted and finally abducted by the feudal count and despot Oberthal. At first reluctant to join the opportunistic Anabaptists Zacharie, Jonas and Mathisen, the revengeful Jean succumbs to their pressure after all. He leaves his mother Fidès without bidding her farewell to become their destined leader and King of Münster in the end due to the fact that he closely resembles the picture of King David in Münster Cathedral. Drunk on power and immoderateness the Anabaptists start to undermine their idea of communism and polygamy by establishing a terror regime. Initial enthusiasm turns into narrow-mindedness and fanatism to end up in war and literal destruction: a huge explosion occurs at the end and the palace collapses in smoke and flames. The musical performance is for the first time based on the revised version of the historically critical edition of Meyerbeer’s score and turns out to be a complete success for the singers, chorus and orchestra as well as the conductor Enrique Mazzola. He creates a mixed romantic sound, slim enough to demonstrate the colourful details of the score and broad enough for the adequate pomp of the Marche du couronement. The Orchester der Deutschen Oper Berlin manages the constant change of tempi brilliantly and sounds precise and charming. Jeremy Bines, the new director of the Chor der Deutschen Oper Berlin has prepared its singers very well who vocally represent the different groups such as nobles, citizens, Anabaptists and peasants in a superb way and the Kinderchor der Deutschen Oper Berlin does not fall short prepared by Christian Lindhorst. The vocal requirements are enormous going beyond usual standards the more so as Meyerbeer used to 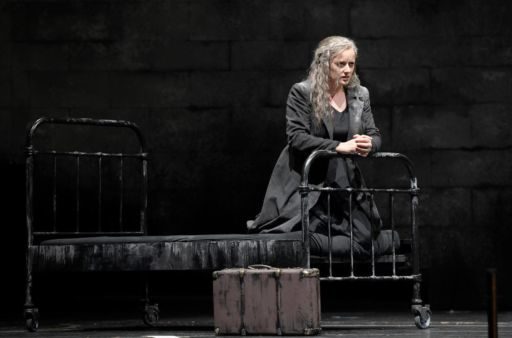 compose the parts for the singers of the premières of his operas. As a belcanto specialist for decades, the tenor Gregory Kunde excels in the demanding title role. It is amazing how he starts with light phrasing in the second act to develop heroic brilliance from the third on. His voice has gained colour and power without losing the ability to cope with the abundant coloraturas and top notes in a perfect way. After Dalila and Carmen Clémentine Margaine has established herself as a specialist in the French repertoire. Jean’s mother Fidès is by far the most demanding role she has taken on, originally composed for the vocal possibilities of the legendary Pauline Viardot. Clémentine Margaine manages the part competently by the smoothness and glamour of her mezzo-soprano. Full deep and radiant top notes are combined with an attractive mid-range of the voice that appears most homogeneous and turns “O pretres de Baal!” in the last act with the virtuoso finale “Comme un eclair precipite” into the highlight of the opera night. Elena Tsallagova grades the part of Berthe up by her capable, occasionally strident soprano. She performs fine staccati and trills that sound a little exerted at the start, which has largely come into vogue. Seth Carico’s virile and dark bass-baritone sounds ideal in the role of the villain Oberthal. The sinister Anabaptist trio is also cast very well. Derek Walton is a sonorous Zacharie. After a short warm-up his bass is up for coloraturas as well as the song in the third act. Andrew Dickinson has a beautiful and clear-sounding tenor for Jonas and stands out with a fine phrasing and dead certain top notes. Bass-baritone Noel Bouley completes the trio as Mathisen. The three intone the liturgical melody “Ad nos, ad salutarem undam“ so perfectly well in unison that one can understand their mystical influence on the crowd. Unfortunately, the production of Olivier Py, director of the 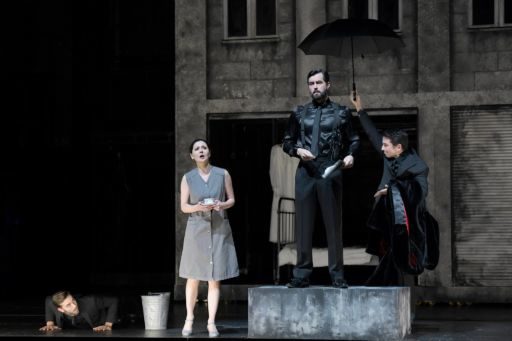 Avignon Festival is no match for the marvellous musical performance. He has transferred the action to our time. Grey facades of high-rise buildings and run-down tenement houses dominate the stage designed by Pierre-André Weitz. The admittedly professional production suffers from the well-known and interchangeable elements of Regietheater such as darkness, fog, fire, LED advertisement screens and dazzling spot lights. There are smoking chimneys in the city and the crowd looks like factory workers rather than peasants. Radical violence seems to be omnipresent: soldiers in camouflage suits with machine guns and revolvers, shooting exercises, a burning upside down car, killed people put in coffins to be carried across the stage. Berthe is a charwoman who is not only abducted but also raped by Oberthal in and on his black Mercedes. A carnival party is on in Jean’s “Bar Restaurant” before he tells the three Anabaptists about his dream illustrated by dancers. A semi-nude male angel appears throughout the opera carrying cardboards reading clémence, malheur or Fils de Dieu. Py creates a portentous scenery but an adequate Personenregie is missing. Singers, actors and chorus seem to be arranged most part of the time on the far too much revolving stage. Instead he concentrates on the choreography of the scrapping dancers in the fifteen-minute ballet scene in the middle act which turns into a homoerotic fantasy á la waterboarding in underwear culminating in a flurry of gymnastic movements at the end. As inevitable the ballet used to be at Meyerbeer’s time performed by roller-skating dancers in the première, as unnecessary it seems to be in this production. The bacchanal in the fifth act is a metrosexual orgy of the nude, mostly male dancers arranged in red light on the first floor in the background. The theatrical effect of Meyerbeer’s finale is completely missing. There are no soldiers who are taking the palace of Münster by assault and there is no destroying explosion. Jean shoots himself and the surviving Count Oberthal is treating himself to a cup of coffee sheltered by a big umbrella. Photo © Bettina Stöß