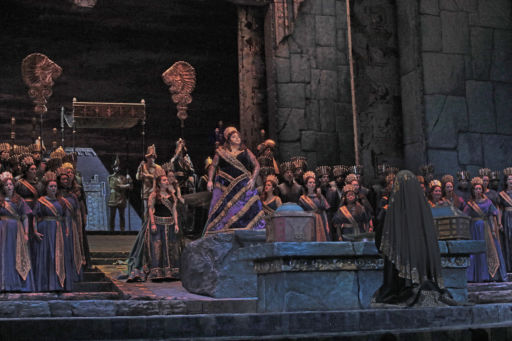 Rossini’s Semiramide is an opera on the cusp—on many a cusp. It is Rossini’s last opera seria—or is it his first grand opera in the brand new French style? It is his farewell to Italy when he was about to depart for Paris, or was it his introduction to France, with a libretto based on a Voltaire tragedy? The plot is Voltaire’s attempt to set Shakespeare straight—like most Frenchmen of his era, he detested the Bard’s informal and unclassical genius—by rewriting Hamlet with the “proper” half-happy ending, to Parisian taste. The exotic setting vies with the spectacular demands made on its leading singers. Its old-fangledness made it popular when most of Rossini’s other Italian serious operas had faded from the scene, but has also made it tough to revive when vocal styles changed. The four leading singers, or at least two or three of them, must provide the excitement this processional drama with its many scenes of formal ritual may seem to lack. At that, Semiramide does not need to be quite so static as it seems in John Copley’s 1990 production, which returned to the Met on Monday after a quarter century. The chorus of Babylonians are immobile. There’s an earthquake, lightning strikes the altar, the walls tremble, the text is full of terror—yet they do not move. There’s a ghostly apparition decreeing a denouement (at the end of Act I, so a bit early to really clear things up), and the chorus sings of fright but does not move. They stand there arrayed in rich colors (the ghost wears a nicely contrasting gray), as lively as an Assyrian colored brick wall. True, in John Conklin’s cramped set of receding squared doorways it would be difficult to get too lively. But director Roy Rallo has let them stand there like department store manikins or a field of well-decorated Christmas trees. In bel canto, great singing excuses all, if excuse is required, but on this occasion the singing didn’t excuse much and nearly everyone took a long time to warm up. Angela Meade remains a puzzle—either you like her or her glaring deficiencies as a singer get in the way. If Semiramide has been revived, surely it is on her account, yet she does not sing it well. Her “Bel raggio” was distinctly flat, and she only struck something like proper pitch when joined, in duet, by the mezzo or the bass. She is nothing special as an actress and did nothing to excite the rigid chorus. Her high notes, as is her custom, come from nowhere, detached from the rest of her voice. The simple concluding prayer was her best singing of the night, and it did not make up for the remainder. I wish she’d sit down for six weeks with a bel canto specialist like Richard Bonynge, and then work hard to do what was recommended to fix her defective technique. There’s a voice in there that’s worth saving. She seems oblivious to its defects. Elizabeth DeShong has long been a star in bud, singing small parts and trouser roles exquisitely. She was scheduled last season for Italiana, but withdrew, and one has to admire a singer with a sense of her strengths and her limitations. On Monday, she sang many lovely dark phrases and a few bright ones that reminded one of Marilyn Horne—but there was not enough of Horne to pull the entire effort through; she lacks power in the lower ranges of her voice. She will probably get better as the run proceeds. There was charming bel canto in her give-and-take duets with Meade, however. Assur was sung by Ildar Abdrazakov, and as is always the case when this singer takes on a Samuel Ramey role (Attila, for instance), one spent much of the evening missing Sam Ramey. The sound itself is consolingly similar and his acting is rather decent, but ornaments were haywire and several sections were taken (by the lackluster conductor, Maurizio Benini) at a markedly slow pace to accommodate Abdrazakov’s lack of poise. Great dark utterances, however, fit him neatly, and his Mad Scene was ably sung and effectively acted—and at least ten minutes of the music was omitted. Semiramide, like most of Rossini’s operas, was devised for the principals, and in the serious operas, it is usually the tenor who gets the short end of whatever stick there may be. Tenors were not a big deal yet in Italy, though they were the new chic thing in Paris, and once there Rossini created Comte Ory and Arnold (in Tell) to make up for his previous neglect. Voltaire’s Sémiramis, Rossini’s source, is a version of Hamlet, with the elements “adjusted” to suit more refined Parisian taste (Voltaire detested Shakespeare for his vulgarities and violations of the classic unities): Gertrude (Sémiramis) actually proposes to Hamlet (Arsaces) before they find out he is her son; she has actively connived at her husband’s murder with her lover Claudius (Assur), and it is he rather than Ophelia (Azema) who goes mad under the influence of the murdered king’s Ghost. Where is the tenor in all this? The tenor is Idreno, an Indian princeling who has come to Assyria to pay homage and, if possible, win the hand of Princess Azema (in love with Arsace, pursued by Assur). Azema has nothing to do, but Idreno, besides participation in a quartet and a trio, has two double arias, one in each act, to give the three principals time to breathe a bit backstage. Philip Gossett once attempted to cut one of these scenes but was thwarted by Chris Merritt, who stood up for tenor rights. At the Met, the role has been given to Javier Camarena, a genuine bel canto star, who provides the most rewarding singing of the night. He is ornamental and exciting, with energy to fill the room and a pleasing stage presence. While the sensuous velvet of his best work was not on display—the role does not call for it—there was a new power, a leading man’s authority that makes me eagerly anticipate his appearance in Lucia later this spring. His curtain call drew an explosive response. In the smaller role of Oroe, High Priest and revealer of exposition (sort of a two-bit Gurnemanz), Ryan Speedo Green made one of his typical indelible impressions. It is a pity the character’s headdress made him twice as tall as DeShong’s Arsace. Jeremy Galyon played the Ghost, in a gray version of the colorful regal armor worn by Assur. Videos of recent productions of this opera from both Munich and the Delaware Opera made Semiramide seem tense, thrilling and full of attractive music. At the Met, it’s pretty but dull. It does not need to be. Photo Ken Howard