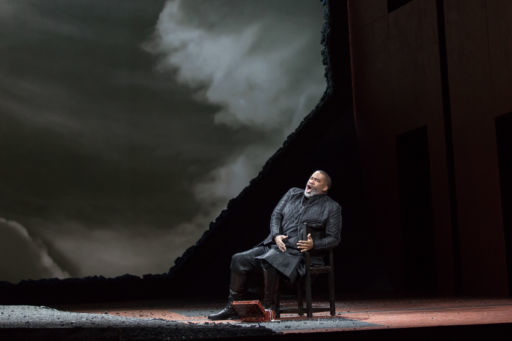 At the Washington National Opera, Don Carlo is being given in Italian, in the short, four-act version. Tim Albery’s production in Andrew Lieberman’s sets is an austere thing of black costumes, walls of cagework (to express the trapped position of the characters) and far too many chairs. Even the gardens – two of the scenes are set in gardens, you know – provide neither flowers nor greenery. All Constance Hoffman’s costumes appear to be black, but then Thomas C. Hase’s lighting changes subtly, and the court ladies’ black dresses turn out to be some iridescent material that changes to handsome russets and blues. The set is backed, in the opera’s first half (the break comes after the Auto-da-fe), by a vast octagonal dome into which we are staring. In the second half, the vaulting of the dome is replaced by effulgent heavens, still within an octagonal frame. At Ely Cathedral, I was told that their eight-sided dome (the only one in England) was said to be the proper shape for a portal into heaven, and in Spain, I found that a dozen cathedrals boast this feature, evidently for the same reason. Perhaps that is the designer’s message: For the first half of the opera, we are oppressed by the stonework of a ponderous earthly power; during the second, Heaven itself witnesses the action and (maybe) interferes. If so, Albery defeats his own purpose by having Don Carlo not carried off into the tomb by the ghost of 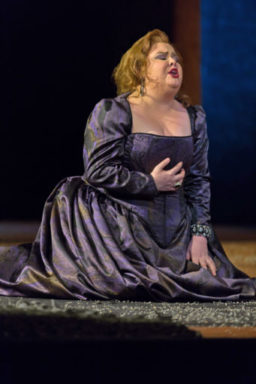 his imperial grandfather, as in Verdi—instead, he stabs himself with a dagger, an operatically traditional but ineffective gesture. If you are going to have the supernatural invade your opera, why renounce it at the last? Otherwise it was a simple, basic production of Verdi’s elaborate grand opera, with little of the sparkle he hoped for in his grandest scenes. The metaphor of walls of cagework that descend and separate the characters was clear enough. The absence of the Fontainebleau scene did not much undercut the grandeur of the rest, except that the melody of the love duet is a leitmotiv that recurs three or four times during the opera, and if that duet has not been sung, it refers us to nothing. But but newcomers to the opera did not seem to feel the lack of anything except, perhaps, a second intermission. Frankly, I was there to hear the singers, a hearty sampling of the rising generation of American Verdi-ism. Some of their acting seemed wayward, unfocused, as if the relationships were not clear to the persons enacting them or the director not really sure what to ask of the performers. Too, the gentlemen of this wealthy royal court might have worn something other than black leather now and then, especially at gaudy public rituals, and the ladies might have been more handsomely costumed and coiffed. The singing, however, was impressive. 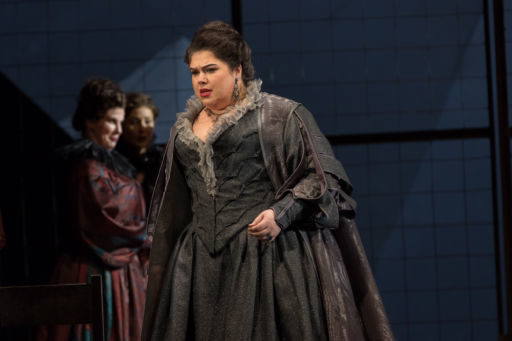 Leah Crocetto, an admired Aida, has the warmth and weight for Verdi’s powerful middle-period heroines, but she did not seem tremendously involved during the first confrontational duet with Carlo, when he is having a nervous breakdown and she is constantly aware that his father might come in. Perhaps she was saving herself for “Tu che le vanita,” when she produced beautiful tones with thrilling power. Perhaps she had difficulty warming up because the omission of Fontainebleau with its ecstasies of young love left her no cliff top from which to glide down to regret. She needs to ponder the woman who is introduced to us in that garden, her many moods and relationships as she tries to deflect Carlo, defend the Countess, stand up to the King. In America, just now, Jamie Barton usually has the largest voice in the room – no surprise! – and it is a smooth, easily produced, vital, womanly sound that she produces. But I was curious about how she would act Eboli’s multilayered and disloyal character. Eboli’s symbol is the Veil – she is a spy, a false friend, a falsehearted lover – and, ironically, the Veil – of a nun – is just what the Queen commands her to take in their last meeting. (The libretto makes the pun, but the surtitles did not.) Barton is not a subtle actress yet but she has a confident stage presence, and confidence in this chic, brittle role will take you far. Her voice had a superb sheen for the Song of the Veil, and though its Flamenco-flavored fioriture escaped her – as it does nearly every Eboli – she handled it simply and cleanly, producing effects with triumph. “O don fatale” was a terrific piece of showmanship – what it was not was an uneasy, tormented mind exploring her internal contradictions, and that soliloquy is what Verdi composed. This seems to have occurred neither to Barton nor to director Albery. I’d like to see Barton’s take on the role a few years down the road.
Russell Thomas has been attracting admiring notice lately in such roles as Puccini’s Rodolfo and Mozart’s Tito. As the far more complicated Carlo, who is going mad before our eyes and ears, his singing was always attractive but rather too light and well-mannered. The ill-suppressed nuttiness of the Schiller adolescent hero in revolt against society was hardly ever present. He was perfunctory in both his love-making and his rebelliousness (the collar of his costume, which gave him a hunchback – possibly historical but no fun to sing in – did not help him), but the voice itself is of such quality that I am eager to hear it again in more suave roles like Alfredo or Riccardo. (His surtitles translated “Madre” as 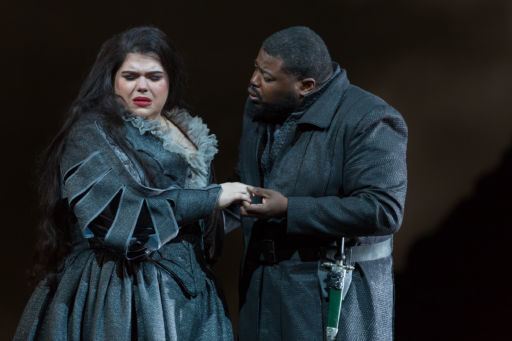 “Queen” throughout the opera, as though Washington National found the stepmother-stepson relationship entirely too creepy. Creepy it is, but it’s the point of the opera and the play that was its source. When Carlo reaches the point in the final scene where he can address Elisabetta as “madre,” we know he has made a breakthrough and put love aside for duty. Undercutting that moment does the opera no favors). Quinn Kelsey, the Posa, is, quite simply, the reigning Verdi baritone of the present day, as everyone must have realized when his Count di Luna was broadcast from the Met last month. There are few roles in that fach (from Donizetti’s Enrico to Giordano’s Gerard) that I would not go some distance to hear. His easy, cantante sound soothes and warms, his diction is impressive, his breath control ideal, and when he has to get angry or desperate, the addition of power seems effortless. Rodrigo is, in many ways, the simplest of the opera’s characters – he was fictitious, o history never complicates him – and his melodies are the most old-fashioned and graceful for 1867. As Kelsey sang them, they were beautifully phrased; they meant something – but so did his duets with Carlo and the King. Eric Owens puzzles me. Sometimes he is in total charge (as Wotan in Chicago Lyric’s Walkure last fall), sometimes out of his element (as the troubadour knight in L’Amour de Loin at the Met last year). To his rich, burly voice he adds a thoughtful presence: He always considers the text and the person he portrays, and his Wotan was carefully judged so that he remained in breath through the longest passages: He wasn’t just singing to us, but to Fricka and Brunnhilde as well. His King Philip lacks the titanic force that must always be in readiness for the moments when (Verdi indicates) he commands and crushes an empire and all its peoples. He must sound like King of Half the World (as the Grand Inquisitor – a somewhat wobbly Andrea Silvestrelli – calls him). These moments were weak, grainy. 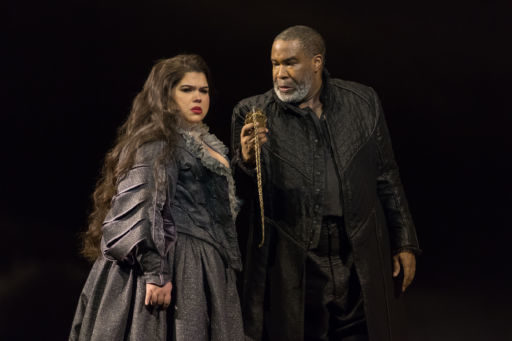 He did not inspire awe in Posa or Elisabetta or ourselves. But at softer moments, he was in charge: His “Ella giammai m’amo” was touching – Owens knows a soliloquy, a personal inquisition, when he encounters one, and it was pleasing to the ear as well. But he lacks imperium, and a role like this should have it. Peter Volpe was effective as the ghostly Friar. The Celestial Voice was, as so often, undercast: Leah Hawkins has a large voice that cannot handle the coloratura runs that are so much of those two pages of this enormous score. Philippe Auguin conducted a well-controlled performance, and supported the singers during their lengthy ruminations. (They were watching him but you couldn’t tell they were watching him, if you get me.) The cello and the brasses were especially noteworthy during their highlighted moments, and the oboes and flutes made something so delectable of those reminiscences of Fontainebleau that it seemed more the pity not to have heard it.
Some questions for the production team: Why is the Queen’s hair in a Victorian top-knot as if she were a landlady in 1890? She’s the Queen of Spain — give her a headdress or something to make her elegant in the more public scenes. Having Eboli wander through the King’s Study in dishabille rather spoils the shock of her revelation, much later in the scene, that she is his mistress. And no one sits in the king’s presence. Ever. Too, the Dutch envoys really should take off their hats to their king, I don’t care how mad they are at him – they’re asking him for a favor. Manners count! Photo Scott Suchman