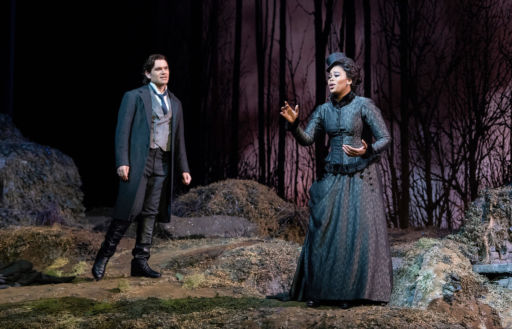 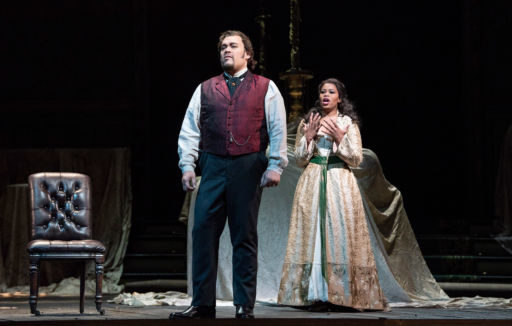 Lucia is cast iron. Do whatever violence you like to it, if the singers are any good at all the piece will cook. It is the oldest serious Italian opera never to have faded from the repertory. The discoveries of modern psychiatry and the changing relationship between the sexes have only added depth to its possibilities of characterization. In the bad old days, Lucia was often cut to ribbons, the sextet and the Mad Scene isolated among the chatter, scenes omitted, other Donizetti numbers inserted, the glass harmonica replaced by a flute. That never mattered. Lucia carried the day. There is no limit to the variety of ways its archetypal characters can be played: Lucia angry or broken or driven to distraction; Edgardo grim and hysterical or brooding and cold; Enrico brutal or smarmy and, in recent years, incestuous; Raimondo mealymouthed or genuinely peace-loving. And those moody, romantic French horns invoking Scottish mist never fail.
The Met’s Mary Zimmerman production set in grey, late Victorian Scotland currently lists no “revival stage director,” so I presume the alterations that have crept in since its premiere are her own re-thinkings, now that she knows the score, musical and otherwise. The chorus of “beaters” in the opening scene flourish their lanterns in rhythmic sequence, and the wedding guests in Act II look about, similarly synchronized. This seems a bit musical comedy, but will pass. The photographer is not quite so obtrusive during the sextet; we are allowed to enjoy the music of the most famous concertato in opera instead of being forcibly distracted from it. Roberto Abbado led a lively performance, complete with glass harmonica, and the show flowed graciously and energetically from start to triumphant finish, when all the lead singers were cheered to the echo. Mind you, this was the third Lucia cast of the present season, and neither of the previous sets has been kindly noticed. Some of us were waiting for the latest cast, and while we waited, Abbado and company were getting plenty of practice.
Pretty Yende, the South African coloratura, sang her first Lucia with the company. I have heard her 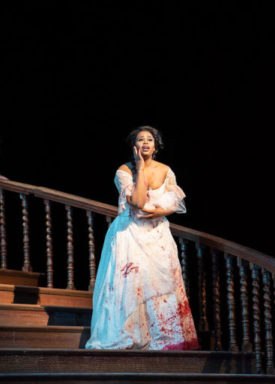 here as Rosina and Elvira Walton, and it had been my judgment that dramatic coloratura was her home base. The voice is well produced and runs easily up and down its compass without breaking the line. In her sortita, there seemed a hesitation on the highest notes and a fuzziness about trills, but as the long evening went on—it’s a very long evening for the soprano—she settled in and provided gorgeous tone throughout her range. Her passagework was delectable, and her trills eventually came through. She seemed very much a young woman in love in that first scene, with ardent clinches with her Edgardo. She did not seem to have the life crushed out of her in Act II, as Natalie Dessay played her, and she seemed less outraged than Joan Sutherland, but her shudders at the touch of Lord Arturo were believable. In the Mad Scene, she seemed rather lost than hostile, but that is certainly part of the scene as written. Yende’s voice blended beautifully with the various gentlemen of the cast, but when any of the loud ones (Edgardo, Enrico) or the chorus were holding forth, it was difficult to hear her at all. Donizetti has taken care of that, providing the soprano many a gorgeous phrase with little or no accompaniment—no one was more professional than Donizetti! But this is not so strong an instrument as one might hope for. And her menfolk were an unusually strong contingent. 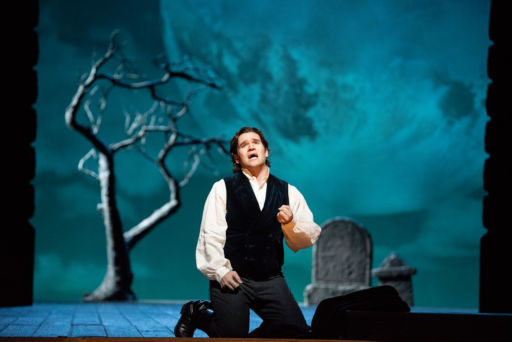 Michael Fabiano, who matches Yende as a romantic stage figure, is an intense tenor with a trumpet-sized voice, and an ardent actor, who throws himself hectically about. He was passionate in love duet and passionate in outburst, with little shading between the two—one might prefer an Edgardo to be cool at first until provoked to the famous “maledizione.” What I have always wondered was whether he can sing softly, lyrically, as bel canto tenors are often required to do. “Tu che a Dio spiegasti l’ali” should settle the question, but he sang it full voice from the front of the stage apron, and atop his sword maneuvers after the sextet—he appeared to offer to stab himself, to stab Enrico, to stab Lucia, or to permit her to do him in—this made one speculate which of the lovers was the crazier. Performing excites him, and that’s a good thing, but bel canto should have more grace to it.
Burly Quinn Kelsey may well be the finest American lyric baritone of his generation, suitable for any of the roles in that category in the operas of Donizetti or Verdi. The voice is powerful without the slightest sign of undue effort, the legato pure, the emotive force distinctive. I was not alone in regretting that the Met cut the repeat of “La pietade in suo favore.” His changes of mood were striking in Act II as he appeals to Lucia for pity and then turns into a bully, and his duet with Fabiano in the Wolf’s Crag scene drew enthusiasm from all over the house.
Fresh from a superb stint as Verdi’s saturnine Count Walter in Luisa Miller, Alexander Vinogradov gave a similarly restrained but passionate account of Raimondo. He is clearly a singer who thinks through his effects carefully, and the sorrow in his voice as he described the tragic events in the wedding chamber was palpable. Edyta Kulczak made an effective Alisa without making the common mistake of outsinging her Lucia. (The Met keeps giving this role to large-voiced mezzos.) This was, therefore, a very satisfying performance of an opera that can be thrown together casually or presented as a vehicle for one or two of the principals. One might prefer a louder, angrier Lucia or a subtler, less emotive Edgardo, but no one was miscast. The ancient machine still purrs.Photo Jonathan Tichler / Met Opera